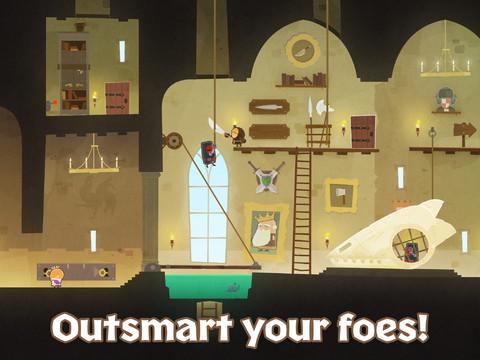 From the tiniest of hands, comes the biggest of heists.

How deep are your pockets? Hopefully deep enough to hide all the little toys and trinkets you’ll have snagged by the end of this game! Tiny Thief is the second title published by Rovio Stars, after last month’s exciting Icebreaker: A Viking Voyage, and the quality in execution has magnified by tenfold. In many ways, Tiny Thief could very well be the first point-and-click adventure and stealth hybrid that has the potential to reach App Store Essential status, alongside mobile staples like Cut the Rope and Where’s My Water? And thankfully, the gameplay and presentation are just as superb.

The controls in Tiny Thief are as simple as tapping on where you want to go, and then having your little thief inch his way over to that position. Clicking on interactive items will either cause something to happen in the game world, or add something new to your inventory, which can then be used on something else to further progress towards stealing that coveted item that marks the end of each stage. It calls to mind the essence of pure stealth games like Thief, the unmistakable point-and-click attitude of the Monkey Island series, and the visual polish and sheen of Rovio’s own Angry Birds.

Of course, since you’re a thief and all, there will always be a bunch of guards and the like out on patrol, who want to make sure that you aren’t stealing from them or their employers. Guards can be avoided by a number of ways: from hiding in a barrel until they avert their gaze and it’s safe to sneak past them once again, to starting a unique environmental chain reaction to take them out of the picture permanently. What’s great about Tiny Thief is that you won’t have to mess around with a clunky camera, as each beautiful location of the game fills up the screen entirely in a fixed position. A handful of later levels are so large that you’ll need to move to two or three adjacent locations to set you thievery in place, but even this is as simple as moving to the arrow at the edge of the screen, before you’re transported to the next vibrant and fixed background.

Every single moment of every single stage has been meticulously crafted, and positively gushes with creativity and charm: not only in the level layouts and eventual solutions themselves, but in the amount of attention that’s given to the finer details, like the many interactive objects you’ll be able to tap on in the background. There is a quick comic book-style intro before each and every thievery quest, and a unique animated results screen after you complete one. Developer 5 Ants could just have easily used a stock completion screen and done away with the many intros, so it really goes to show the amount of care they’ve put into their creation. While each adventure primarily involves stealing a main item, the storyline is always interweaving with a number of fun and exciting themes, like a pirate town and a castle siege, and there is never a lack of things to see or (perhaps more appropriately) steal. 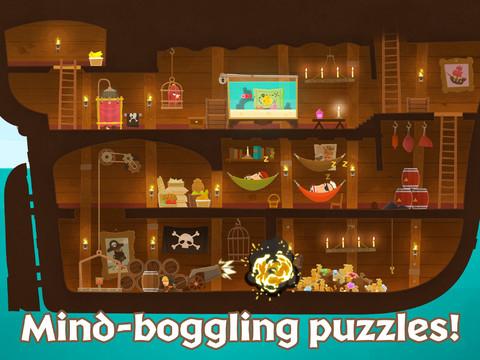 Now given the fact that Rovio Stars’ logo features those three golden stars that have become so iconic and fundamental in the mobile games industry today, it almost comes as no surprise that each of Tiny Thief‘s levels rewards you with up to three gold stars based on your performance. The first star is awarded for simply completing the level by stealing the main item in question. The second star comes from tapping on your furry little partner in crime, as the squirmy ocelot-type creature pops out in random places on the map (trust me, this becomes a lot harder than it sounds before long). The third and final star can be achieved by making it out of the level with a pocketful of optional loot. Usually anywhere between one and four bonus items outside the main catch, these really encourage you to explore your surroundings in all sorts of new ways, and to put those sticky thief fingers to good use by clicking on quite literally everything around you.

I wish I could give some examples of all the kinds of quirky solutions you’ll ultimately manage to find, but stumbling upon each interactive element in the game world is half the fun, not to mention it feels incredibly rewarding. If there is a downside to Tiny Thief though (if you can really even call it a downside in such a masterful game), then it probably has to do with the overall pacing of the game. The entire first adventure of six is comprised of short and simple tutorials, which might be a turn-off before you’re even able to get into the heart of the gameplay. But if you stick with it past these early moments, then the later quests are much more involved, with multi-tiered chain reactions to orchestrate, multiple interconnected settings, and even more harrowing escapes to make. There also seems to be a slight crash issue that’s currently plaguing one particular level: even though I’ve never experienced any crashing myself, it should still be noted that the possibility is out there, although this will no doubt be fixed in a future update. 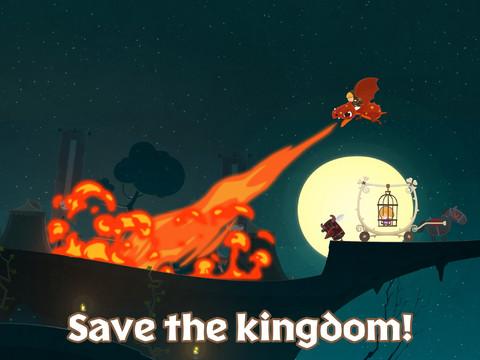 But when all is said and done, I can’t say I have ever played a more unique and wonderful point-and-click adventure that was specifically built for the mobile screen. In every way possible, Tiny Thief manages to raise the bar between what can be accomplished on the mobile platform today in 2013, as it settles right into its impeccable balance between fun, original gameplay, and the bright accessibility of games like Angry Birds.