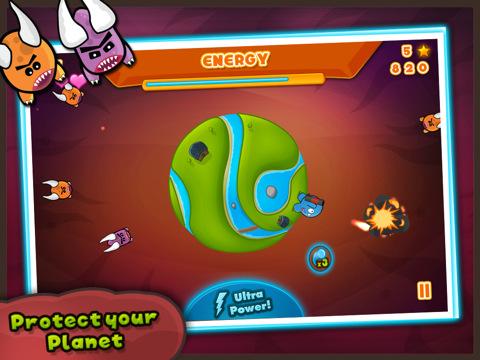 Tiny Planet shows what The Little Prince would’ve been like if he’d had a ray gun.

Have you ever wondered what Space Invaders would have been like if it was crossed with the The Little Prince‘s setting? Me, neither, but I couldn’t shake the feeling that Tiny Planet’s developers had been wondering about that exact scenario when they made the game. As it turns out, it’s actually pretty fun.

Tiny Planet is a defense game in the same vein as Space Invaders, where players control a single unit that moves around to fire at enemies appearing from off screen. In the case of Tiny Planet, though, players have an entire (tiny) planet that they have to run around. Movement is controlled by dragging one’s thumb around the planet, while Baboo (the player-character) fires automatically as he runs. It sounds pretty basic, but the game grows increasingly difficult by upping enemies’ speed and adding more and more of them into the mix.

The game gets easier as more upgrades are unlocked, though there’s not much of a difference in difficulty. It’s still increasingly tough to get Baboo to run around his world in time to keep the unwanted invaders away, but all the collectable weapons and abilities (like fireballs, spread shots, and the ability to freeze all the aliens on the screen) give players various edges that help them survive longer. Unlocking these items requires players to acquire stars in the game, but each in-game item carries a fairly hefty price tag.

There are two ways to earn stars. The first, slower, method is to simply play the game and collect them as they fall towards Baboo’s planet. In order to pick them up, the little blue guy has to catch them; letting them hit his planet won’t add to a player’s star supply. This is pretty tedious and frustrating, but there’s another option: players can buy other apps from within Tiny Planet; once they’ve been installed and opened, players are automatically rewarded with more stars. Many of these apps are free, so it’s not a big deal to simply install, open, and then delete them from your iOS device afterwards. It should be noted that some of the apps do have a price tag, but these apps that do cost money also reward players with a ton more stars than the free ones do. 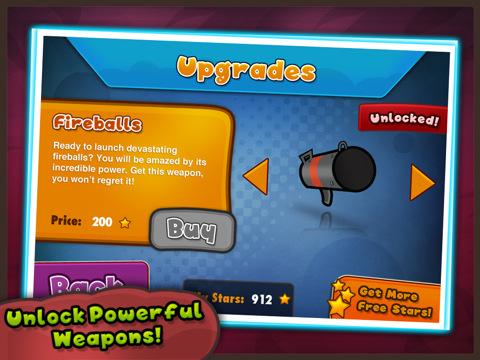 The game’s production values are pretty solid. The graphics feature a goofy, cartoon-like style that’s fairly charming. However there are only a few types of enemies, so they start to look a bit boring as time goes on. The music, meanwhile, is cute and doesn’t distract from the game itself.

While the game certainly looks nice, the small screen on the iPhone works against the game. On the iPhone, it’s often difficult to see aliens as they fly in because one’s thumbs often cover them up when they first appear. It’s actually easier to play the game in on the iPad, since the screen is so much bigger.

Tiny Planet is one of those games that alternates between being cute-and-quirky and furious-and-frustrating. At the start, it’s dauntingly difficult, and it never exactly becomes easy, but it becomes more enjoyable to play as more and more upgrades are unlocked. At no time is it possible to just coast through the game, but the challenge it provides will certainly thrill a lot of players.