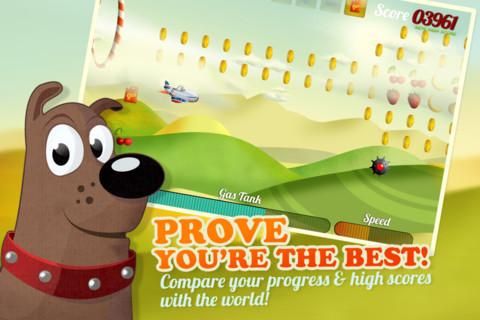 His bark is worse than his flight

It’s no stretch to say that flight is one of man’s greatest accomplishments. It completely changed the way we travel, and introduced a new hobby to rich people everywhere. But what about dogs? Sure, they’re occasionally allowed to travel on planes, but why have they been denied the chance to fly them? It’s a hard-hitting question, and Chillingo’s Tiny Plane is in search of the answer.

Tiny Plane has a very simple concept: fly as far as you can, and pick up as many coins and power-ups as possible along the way. The control scheme is both easy to learn and pleasantly unobtrusive. Touching the left side of the screen causes the plane to fly upward; touching the right side moves it downward. That’s all there is to it, and it functions much better than any sort of virtual joystick or swiping mechanic likely would. In the game’s normal mode, that is. The controls are a little flakier in the more frantic “Hardcore” mode.

I realize I’ve made the skies of Tiny Plane sound like a pleasant place to be. Which they are! But there are also some obstacles to avoid. Dreaded spiky-bomb-things (™?) are scattered all over, as are balloons that force you to ascend and weights that force you to do the opposite. And if that wasn’t enough, you frequently have to fly down to the ground to refill your gas! Humans don’t even have to do that anymore! Nowadays, they’ve got normal planes that are fueled by hope and magic.

The good news is that items like shields, fruits, and rings are there to help you along the way. Both fruit and rings serve the same purpose: speeding your plane up. In the case of rings, though, flying through one results in a massive boost, enabling you to mow through obstacles without a care in the world. It’s just like the rings at dog shows: only useful and not demeaning to the animal in question.

The coins you collect along the way can be traded in for a variety of planes, all of which possess different capabilities. One, for example, can fly right through storm clouds without being affected (storms typically rob you of coins when you pass through them). Including the one you start with, there are a total of eight planes available in the game. I wouldn’t be surprised to see Chillingo add more in the future, though.

It sounds like a minor issue, and in a way it is, but there’s no option to return to the game’s menu once you’ve started playing. Crashing does the trick, but it’s a less-than-ideal way to exit – mostly because intentionally crashing a plane with a dog in it makes me feel like a horrible person. 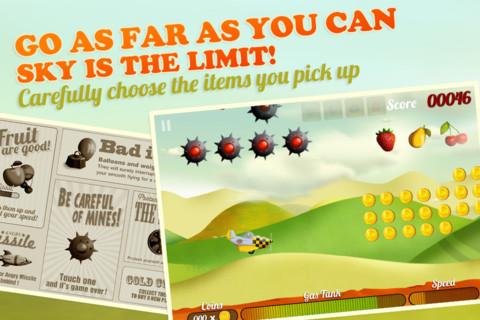 For players who don’t want to take to the skies alone, the game contains an online multiplayer component. I wasn’t able to get a match going at the time of this review, but – assuming it works as advertised – the prospect of going up against friends and random people in the game is an exciting one.

Tiny Plane is yet another triumph for Chillingo, a simple, addictive game with enough complexity to keep people playing well into the future. I can already tell it’s a game I’ll be firing up on a regular basis, if only to show my support to the many dogs out there who have never been given a chance to get their pilot’s license.