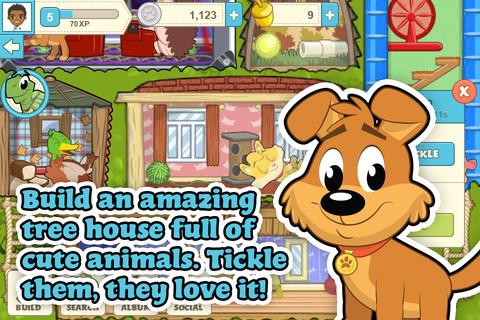 Social games may not be for everyone, but their popularity, especially on iOS, cannot be ignored. The most recent game to do well is Tiny Pets, from social and mobile games developer TinyCo. Similar in respect to the company’s most successful iOS title, Tiny Zoo Friends, Tiny Pets is a virtual space-style of game in which players build a new tree house home for a flurry of furry creatures.

So the world of TinyLand has been flooded by the evil Duke Spendington. In order to escape and rebuild their home, Sully the Dog picks out a rather large tree in which to hide. It is here that players begin to build out a virtual space to house all the homeless critters. In terms of core play, Tiny Pets is both partially a business management sim and collection type of game.

Business management sims are one of the more popular forms of social games, simply because they work well for the target audience. Here, players are given a limited amount of physical space to work with (though it can be expanded) and in order to save new animals, their specific room must be constructed. Depending on the animal, the size and shape of the room will vary, and each one will take two steps to construct. After the location is placed, one tap will initiate construction, and a few seconds later, the final construction will continue (which may take several hours.)

The longer the room takes to finish, the more profitable it will be in terms of money or experience. For lack of a better term, animals pay a sort of rent, which can be collected every so often. After collection, pets will also need to be fed, which aides in keeping them happy (there is also an option to “tickle” them to raise happiness as well). Beyond this, their rooms will often need to be cleaned if the player has been away from the game for a while. Doing all of this garners experience, which plays into the other half of the game, collection.

As players level up, they will unlock new pets in which to save. It might not seem like much of a reward to some, but each one is designed to look as cute as possible to appeal to the game’s primary target audience. Also adding to this is a feature called the Missing Pets Bureau. As players unlock new animals, they will often have friends or family that are still missing after the flood. Users are able to visit a simple mini-game in which they are presented with a grid-lined map of an area. They are then able to search, one tile at a time, in order to find the missing pet. Each search is free (after an initial cost to start searching), but has a cool down time of a few seconds to several minutes or more. Once pets are found they are automatically added to the tree house, and will wander about both their room and any extra rooms the player may have built.

These extra rooms create a bit of added gameplay in the form of mini-games, with one early example being the Arcade. Creating it allows players to play the game of “Rocket Dog” which is essentially the old feature phone game of Ribbon. Players tap and hold the screen to make Rocket Dog go up (letting go makes him drop), and they must collect as many treats as possible without hitting the ceiling or floor of a cave. The better the player does, the more coins they earn.

In terms of social play, Tiny Pets allows its users to create a “TinyID” from within the application and, once done, can add friends. The amount of social integration is not terribly deep, but users can add their friends from both Facebook and the Tiny Pets community. Once added, their virtual pet tree houses can be visited at any time, though the only interaction at the moment is to leave a currency tip. Additionally, if one’s friends don’t care to play, users can still visit the spaces of other random community members.

It is also worth noting that Tiny Pets is a free-to-play game. It costs nothing to download, but in order to acquire premium pets (such as a unicorn), players will have to spend the premium virtual currency, Acorns. This is all bought in-app in quantities that range from $0.99 to $19.99, but its use is not required to play the game. However, if players are feeling a bit anxious waiting for things to build or for pet searches to be complete, they can always expedite them with Acorns as well. 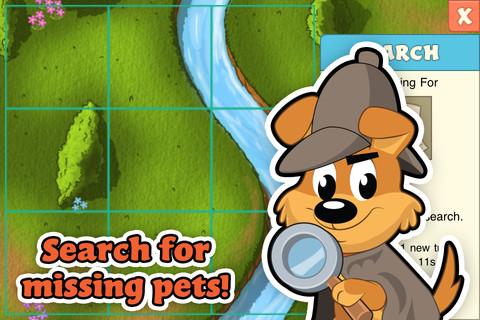 The greatest appeal to the game isn’t the play, as it’s really been done dozens of times before (which is really the only complaint to be had). However, it is cute and its presentation is appealing in terms of both the visual and the audio. It is simple to play, and doesn’t require a tremendous time investment. In fact even with minimal play, users are able to build enough animal rooms to feel like they are making progress.

When you combine all of this with the searching and collecting of new pets, one has the recipe for a very addictive social game. It may not be for everyone, but if you are a fan of simple games and adorable animals, then Tiny Pets is worth a try. After all, what’s a better deal than free?