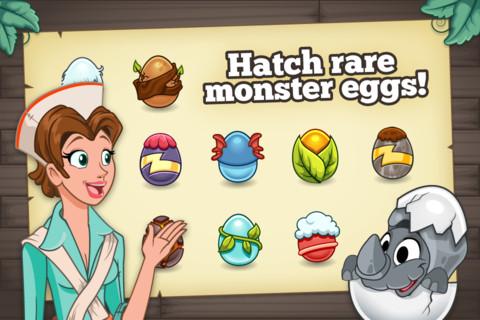 Not quite Dragonvale, but the next best thing

They say imitation is the sincerest form of flattery. If that’s the case, then Dragonvale creator Backflip Studios might want to consider a restraining order from TinyCo’s unhealthy appreciation. Joining their collection of “Tiny” branded games comes Tiny Monsters, a game that comes so close to imitating the classic iOS dragon breeder that you’d barely be able to tell the difference between the two. And while we can’t support this kind of blatant plagiarism over the original copy, it’s still a good game in its own right.

Like the other dozens of mobile isometric zoo sim games out there, your only goal in Tiny Monsters is to create the largest and most impressive economy of cash-earning animals. By feeding, evolving, breeding, and collecting multiple element-based monsters (think Pokémon), you get closer and closer to uncovering the rarest breeds of monsters around.

Your main means of production come through the construction of various types of buildings. Element-specific habitats carry monsters of a specific affinity, farms grow food in order to increase the amount of coins a monster can earn, and hatcheries allow new monsters to come into the world. By plotting out the optimal buildings for the most optimal economy, players can quickly afford bigger buildings and better breeds.

Speaking of breeds, a large part of your focus in Tiny Monsters will be breeding and feeding your way to the top. When creatures have reached a certain level through constant feeding, you’ll have the option of tucking them into the Dream Room. When they wake up, you’ll find that your monster has evolved into a more advanced form.

Two monsters can also be brought to the breeding den, where combination monsters can be created. After a designated waiting period (often a handful of hours in real-time), a new monster will be born. By using diamonds (acquired through meeting goals or microtransactions), an anxious player can speed up the process of nature and obtain new buildings and monsters even faster. There are dozens of creatures in all, and even with a healthy supply of diamonds, it’ll likely take weeks before an ambitious player can catch them all. 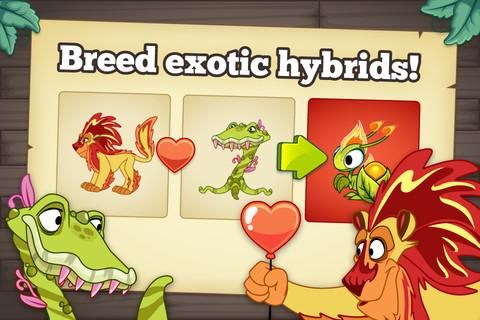 It’s in this vibrant mix of adorable animals that Tiny Monsters shines. Graphics are crisp, and each creature’s unique animation is smooth. The satisfaction of growing a baby dragon in Dragonvale into a full-blown menace is something that few sim games have been able to recreate, but Tiny Monsters comes pretty darn close. From giant flame lions to towering snow monkeys, each and every creature exudes charm.

What isn’t so charming, as we’ve mentioned, is how thoroughly Tiny Monsters rips off Dragonvale. Aside from introducing evolving creatures instead of dragons, Tiny Monsters doesn’t introduce a single unique element of its own. Every elemental type is the same (along with the same large/small habitat structure). Breeding is the same. The art style is the same. Even clearing off new areas of their trees, bushes, and rocks is the same. We could go on and on. 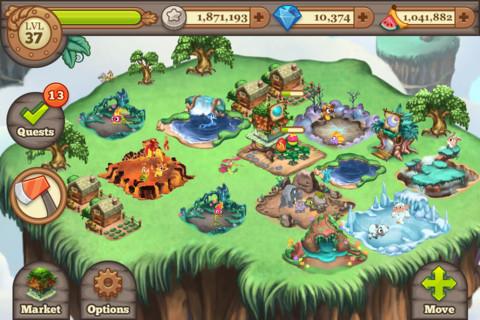 And while Tiny Monsters actually does a fantastic job of emulating the basic Dragonvale formula, it’s still missing a few parts. For one, there are significantly less options for truly customizing your park, and visitors are seemingly nonexistent. We aren’t just talking the in-game NPCs, either: there is currently no friend functionality on little monsters to date. Being able to catch up with your friends is a great reason why Dragonvale remains so addictive, and it’s a crucial element missing from TinyCo’s version.

The only other crime TinyCo commits is microtransaction robbery. Prices for in-game food, coins, and diamonds are absurdly high. Considering that both Dragonvale gems and Tiny Monsters diamonds offer an hour of savings each, you’d think they’d be priced in a similar range. Wrong. While both games offer similar wait times, their prices are far off from each other. $1.99 could buy you 10 diamonds, or 50 gems. Offering 1/5th the purchasing power for in-game currency compared to your intended competitor is a pretty sleazy move.

While it’s easy to point a finger at TinyCo and scold them for some less-than-honorable business practices, you have to hand it to them: Tiny Monsters captures the Dragonvale spirit of addictive breeding-based gameplay. It doesn’t have nearly as much long-term depth as its constantly updating 8-month-old counterpart, but it’s still fun nonetheless. While we wholeheartedly recommend the older title over this one, Tiny Monsters is still a cute (and free) zoo simulator capable of draining hours of your time.