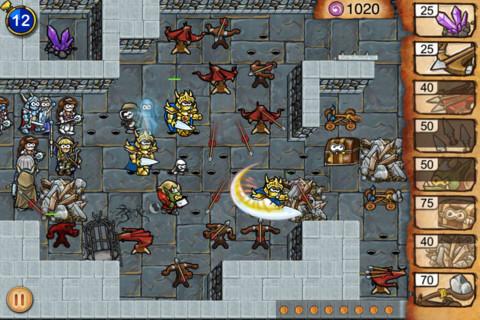 When it comes to video games, we’ve all played the hero before. We’ve stormed the dungeon, beaten up the orcs, and taken the treasure back to town where no doubt someone had a parade waiting for us. But what if the shoe was on the other foot? What if it was your treasure those so-called “heroes” were stealing? Wouldn’t you want to protect what was yours?

Tiny Heroes puts you in the role of dungeon master as you try to protect your gold from wave after wave of heroic adventurer. To do this, you’ll set up a variety of traps and defences to kill the invaders before they grab your gold and make their way back to the outside world. Tiny Heroes, in case you hadn’t gathered by now, is a tower defense game.

But towers can’t be upgraded, there’s no fast forward option – at first, Tiny Heroes seemed as though it might have been a big step back for tower defense games. Once we pushed through those initial feelings though – as well as the first few stages – we started to see Tiny Heroes for what it really was, and we were decidedly impressed.

Rather than setting up the perfect network of towers and passively powering through wave after wave of enemies, Tiny Heroes is all about managing your space effectively and adding in new defences constantly to replace the old ones that have been destroyed. You’re up against a band of heroes after all, and like any hero-driven story, the villain always gets the short end of the stick.

Since Tiny Heroes gives you some fairly flimsy defences to protect your treasure with, the game becomes a frantic balancing act of funds vs firepower as you try to earn enough mana (the game’s currency) to fill the growing gaps in your line of defense. It’s an original twist on a typically by-the-numbers formula, and it’s one we found ourselves liking very much.

If you were only to glance at the screenshots, you might be quick to write this off as a standard tower defense game in the same vein as things like FieldRunners or The Creeps. But Tiny Heroes ends up feeling an awful lot more like Plants vs Zombies that your standard run of the mill TD. The easily destructible, non-upgradable defences. The introduction of new towers at the start of each and every level. The limited number of slots that force you to pick and choose which towers to take into battle. These are all pages from the Plants vs. Zombies playbook, and we’re delighted to see them implemented in a more customary tower defense setting.

Tiny Heroes is fairly well-balanced, too. For every trap, minion, and barricade you set up, there’s a particular type of hero who is custom made to tear it down. Wizards can destroy your mana crystals, short-changing you in the profit department. Thieves can disable traps like spikes in the floor or spring-loaded tiles, rendering them useless. It’s like rock, paper, scissors – for every yin, there’s a yang. 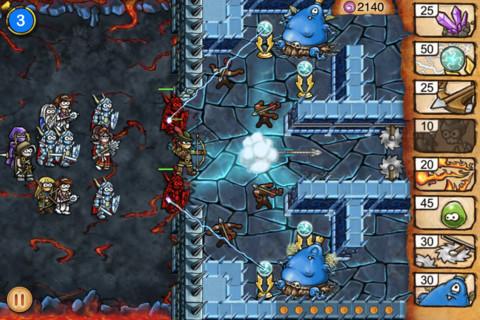 The game isn’t without its charm, either. Characters are cute and bug eyed. Defences are varied and unique. The only sore spot in the game’s presentation is its total lack of music. There are sound effects strewn throughout, but no background music. A game like this demands a proper musical score, so we’re hoping this is a problem they rectify soon.

When it comes to tower defense games, there are a lot to choose from on the App Store. There are plenty of good ones, a handful of great ones – but only a few decidedly unique ones. Tiny Heroes falls squarely into that last category, and it does so in the best way possible. If you’re a fan of tower defense games but have grown tired of the same ol’ TD experience, Tiny Heroes delivers that something special you’ve been holding out for.