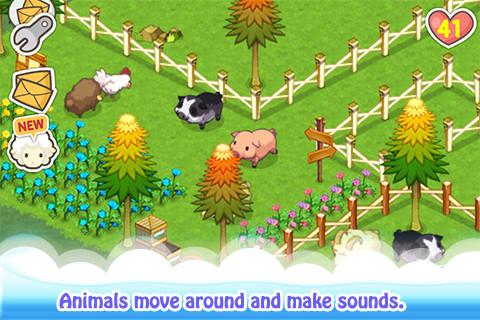 It may play like other farming games, but Tiny Farm certainly one ups the competition in terms of visuals

Tiny Farm is a free mobile game where you manage a farm. No, don’t run away just yet! Because even though there are more than enough freemium farming games to fill an entire wheat field, Tiny Farm manages to offer something different. Not a whole lot different, mind you, but it’s a game that brings a sense of charm to a genre typically devoid of personality.

For the most part, Tiny Farm works just like every other farming game. You can plant and harvest crops and tend to animals and activities which take real world time to complete. You can also decorate your farm in various ways, and there are different types of buildings to construct; each of which has a different function, some of which are relatively unique. For example, the ranger’s cabin, the very first building you can purchase, lets you send out rangers to catch animals from the wild, saving you the hassle of purchasing them yourself.

Animals play a much larger role in Tiny Farm when compared to other games. They mature through various stages and you can breed them with one another. Sometimes you’ll get rare versions through breeding, such as a black sheep, and so a lot of the fun comes from trying to collect each type of animal. It’s sort of like Pokemon but without the fighting. Or the pokeballs.

As always, you can visit your friends who are also playing the game and check out their farms and lend a hand to earn some extra experience. You can only search for or invite friends who are already registered with the game, though, which limits your potential friends. Some sort of Facebook or Twitter-based invite system would’ve been very welcome.

Aside from the increased focus on animals, Tiny Farm plays pretty much like you’d expect. What helps to differentiate it from the glut of bland, me-too farming games out there is its sense of style. The cartoon-style visuals in Tiny Farm are adorable and bring to mind another farming game: Harvest Moon. The animals are all cute and cuddly, which makes it all the harder to sell them off for some much needed cash. The music is appropriately bubbly as well, leading to a presentation that just feels fun. 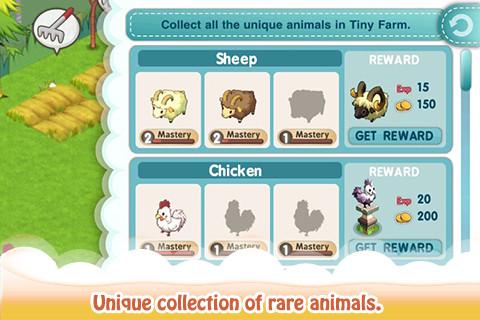 It likely won’t be enough to entice new fans, though, so if you’re sick to death of FarmVille-style games then it’s unlikely that Tiny Farm will change your mind. But if you’re looking for a similar experience with a very welcome facelift, this is just the game. Just be prepared to part with some very cute little pigs.