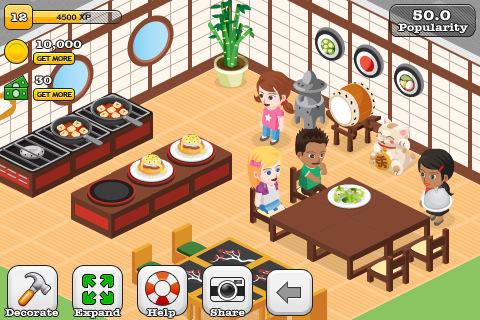 Restaurant games like Restaurant City and Cafe World were all the rage on Facebook earlier this year, so it should come as no surprise that mobile developers are now trying to cook up a cool restaurant experience in a takeout container for gamers on the go. Tiny Chef is the latest in this genre, and though it may not offer a kitchen revolution, there’s no questioning that this is one tasty dish.

Veterans of games like Restaurant Story will be intimately familiar with what’s being served here in Tiny Chef. Players will be tasked with running their own restaurant. They’ll create seating, set up a kitchen, and cook a variety of dishes to serve their patrons. Each dish will require a certain amount of time to cook and will produce a certain number of servings. Once served, you’ll earn money for every customer that dines on your delicious delectables.

While most of what you’ll find in Tiny Chef does little to differentiate itself from the competition, it still manages to do what it does remarkably well. There’s a good selection of recipes, furniture, and decorations to pick from, and the presentation offers a nice level of detail and personality.

In addition to the basics, Tiny Chef also manages to set itself apart from the pack by offering different cookbooks that can only be unlocked by cooking a variety of dishes. Each dish you cook will unlock a star, with up to three stars available for each depending on how many times you cook them. You’ll need to have a set amount of stars to open the next cookbook, which in turn will provide you with more recipes to satisfy your customers.

Despite having all the trappings of a social game, Tiny Chef isn’t social at all. There’s no way to play with your friends, clean their restaurants, or share a dessert. The only thing that’s even remotely social about Tiny Chef is that you can take a photo of your restaurant and share it with friends over Facebook, Twitter, Tumblr and e-mail. That’s it. There’s nothing else. Nada. Zip. 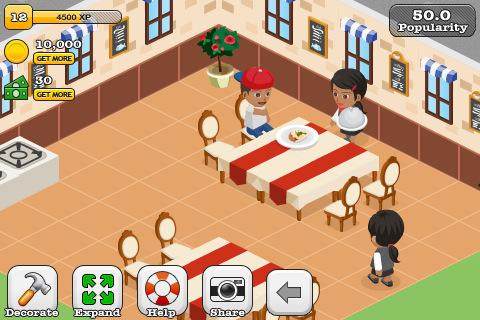 Brooklyn Packet Co, the developer of Tiny Chef, are no strangers to taking the social out of social gaming. Their previous effort Tap Resort is deeply entrenched in a popular social gaming genre, yet that too is completely devoid of social gameplay. For whatever reason, Brooklyn Packet Co has opted to focus on the single player experience, and for the life of us we can’t imagine why.

A complete lack of social elements in the game doesn’t necessarily mean there’s a complete lack of social elements in the overall Tiny Chef experience, however. At the time of this writing there is a contest open to all players in which the best looking restaurant could win Chef Bucks to spend in game. It may not be quite the same thing as cleaning your neighbors tables, but honestly, I think the added incentive makes this style of social play a whole lot more exciting.

While Tiny Chef may not break any new ground in the world of restaurant play, that doesn’t make it any less fun than the competition. A competent cooking experience without the social element, Tiny Chef is a solid choice for fans of the genre who’d rather do their cooking alone.