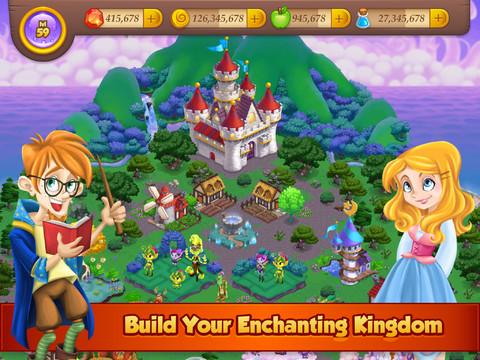 Forget lions and tigers and bears, how about griffons and centaurs and nymphs?

What’s a fantasy kingdom without plenty of fantasy creatures, right? TinyCo’s new kingdom-builder does a good job of emphasizing creature care over simple building tasks and even infuses a surprising amount of exposition into the proceedings. Once what serves as a tutorial section is over, a few of Tiny Castle‘s flaws become more noticeable, but overall it’s still an enjoyable freemium title with plenty of charm.

An evil queen is blanketing the realm in a dense fog, and a small band of would-be heroes is planning to thwart her. Their initial goal is to revitalize the kingdom and steadily push the fog back, but things become a bit more urgent once the Evil Queen catches wind (*rimshot*) of their scheme and kidnaps one of their own. What was a plot to covertly overthrow an oppressive regime turns into a full-on rescue mission in short order. Coincidentally enough, saving their captured comrade requires the same sort of work as their original plan. Which is to say there’s lots of crop growing, creature raising, and minion battling.

Many of Tiny Castle‘s mechanics will be familiar to veterans of free-to-play “sim” games. Habitats must be built to house their creatures, farms need to be tended in order to grow crops, new land has to be explored and cleared of detritus to make room for new structures, etc. As with many similar titles involving a zoo-like scenario, each creature can be fed in order to level up, and leveling up allows them to earn more cash and even fuse with other fairytale beasts to create even fancier denizens. Once a centaur, treant, or one of plenty of other legendary lifeforms is “old” enough, they can also be used to fight off the Evil Queen’s minions and free up even more land.

As with many animal-centric sim games of this type, Tiny Castle has a fairly extensive bestiary that is bound to draw in plenty of completionists and keep them busy for a while. Simply acquiring an egg for a new creature can be exciting enough, but once fusion becomes available it can be incredibly hard to resist the urge to try as many combinations as possible. It’s also nice to see that TinyCo has taken the extra step to include distinct visual differences between each creature’s baby, teenage, and adult phases. On the technical side of things I found it a little weird at first to have a separate sort of currency (they call it “wishes”) needed to expand the kingdom’s borders, but a special building that generates a fairly large amount of wishes for not a lot of coinage and only 6 hours or so of real world time becomes available early on. It essentially prevents players from expanding too far too fast, but ties their geographical progress to actual time instead of cash. Which is nice because that cash can be much more useful elsewhere.

Once a few more areas have been revealed on the map and a couple more “guests” added to the Legendary Animals roster, things begin to wind down to a somewhat disappointing degree. Before long it’ll start to take hours to hatch a new egg or build a new habitat. Some of this downtime can be managed by planting fewer crops that will grow in a shorter amount of time, or by producing wishes in smaller quantities, but it’s almost as exciting to collect and replant food every thirty seconds as it is to pick something that takes eight hours to grow and simply doing something else. 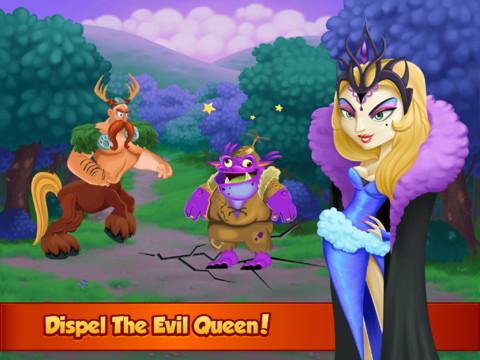 Despite the inclusion of an actual plot (comparatively speaking), a number of quest-giving characters, and plenty of fairytale creatures to care for, Tiny Castle can’t quite sidestep the typical pitfalls of the genre. It’s not without its charm, of course. There’s also no shortage of tasks and quests to complete or animals to raise into adulthood and hybridize–it can just take an awful lot of waiting for meters to fill in order to get through it all.

Northmark: Hour of the Wolf Review