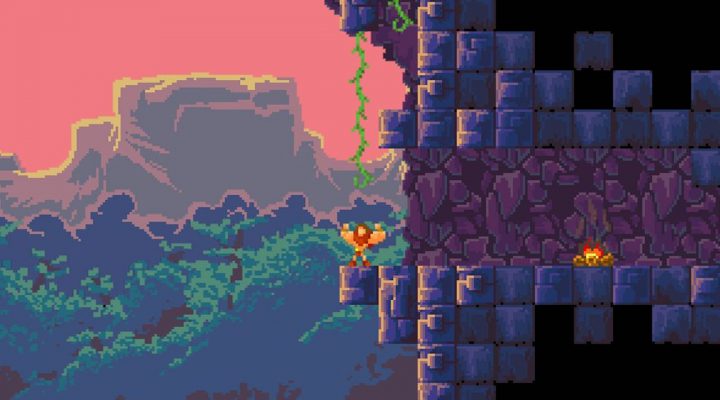 There I was, a barbarian, riding through the air upon my giant war bumblebee, buzzing onward to defeat the evil gorillas flying around me in spaceships. I was dodging thorny vines, sweeping away the pesky primates with my sword, and quickly nearing the strangely futuristic fortress of the apes. None of this made sense, but I was doing great.

Tiny Barbarian DX Chapter 2: The Ruins of Xanadu is a nod to the early days of platforming adventure games, when only a handful of buttons were needed and where save points were few and far between.

Unlike Tiny Barbarian Chapter 1, which felt much more combat-focused, chapter 2 is all about precision: precision jumping, and grabbing, and dodging. The game even occasionally demands super precise movement, where jumping from just the right pixel is the only way to make a jump at all.

A precision-driven platformer is something that demands patience, but once mastered is very rewarding to successfully execute. Unfortunately, my only real problem with Chapter 2 is a finicky mechanic that directly affects that required precision.

At around the half-way point, Tiny Barbarian chapter 2’s difficulty spikes considerably — and it’s the worst kind of difficulty spike. While the game gradually prepares the player for the increased difficulty, the latter portions of the game felt less responsive. When I’d jump to a rope, hit UP on the D-Pad to grab it, and watch my barbarian fall right past the rope…that’s the game’s fault, not mine. This flaw is made more annoying because actual save points are a rarity. Each scene is it’s own check-point, so dying just sends the player back to the start of that scene. But if I exited the game, I’d return to find myself transported back to a much earlier potion of the level. I couldn’t simply revisit a favorite segment of the game without having to replay half the game to get there.

The thing is, apart from the faulty grabbing mechanics and minimal save points, I really enjoyed the game as a whole…which makes the problems stand out that much more.

The gameplay itself is fluid. Jumping from platform to platform while swatting away dive-bombing eagles and dodging apes (flinging their poo) is a satisfyingly simple feat, as is leaping courageously from vine to vine while surrounded by plants spouting poison gasses.

The second chapter of Tiny Barbarian is even more colorful than the first. For the most part, the levels take place in outdoor environments and the game designers did a great job creating colorful background art that complements all the action happening in the foreground. The music that accompanies each area and boss fight is catchy (it even pays homage to a retro classic during a particularly inspired boss fight) and successfully avoids the grating tunes that occasionally accompany a game that goes for a retro feel.

Speaking of feeling retro, Tiny Barbarian continues to nails it with its controls. With just six buttons to worry about (I highly recommend using a controller) the game feels like a modernized port of an old Game Boy Color game. And I totally dig it.

While the game is a short experience, Tiny Barbarian packs a lot of solid action sequences (check out the trailer for spoilers) into a small game. Keep in mind that this is just the second of four chapters, and once the game is purchased, the other chapters are available for free upon release.

Hopefully with chapter 3, the developers are able to find a happy medium between the combat-heavy chapter one, and the (at times annoyingly) precise demands of chapter two. Until then, I’d say check out Tiny Barbarian if you’re into retro-inspired platformers, and can tolerate the occasionally frustrating ghost ropes.