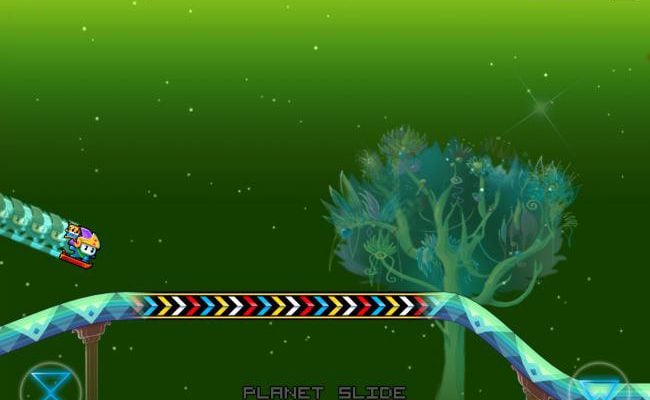 The best combination of surfing, time travel, and space fish to date.

The quick and dirty description of Time Surfer is “Tiny Wings with time control.”  While this is glibly correct—you will dive into hills in order to propel the surfer up and forward—it’s much more than that, and ultimately feels very different from its laid-back inspiration.  Time Surfer is a fast-paced, frantic, and breathtaking experience that—like Tiny Wings—should not be missed.

The game throws you straight into the mix with a brief tutorial: touch the right side of the screen to cause your surfer to dive, which you’ll want to use on downward slopes for momentum.  Release in the valley of a hill to fly, the distance of which is determined by your speed and how well-timed your dive was.  Touching the left side of the screen will allow you to reverse time—but only for as long as you have “time power” (displayed as a purple bar at the top of the screen) available, which is usually a couple of seconds when the bar is maxed.  Collecting purple gems which are scattered throughout the stage, on both the ground and air, will refill your time power.

And away we go!  Any new surfer will quickly realize there’s a lot more to consider on each slide through Time Surfer‘s potentially endless space stages.  For one, the end of the universe itself is hot on the heels of your surfer, threatening to end him (and everything) if he slows down too much.  There are also obstacles—like deadly spikes—to avoid, and obstacles—like alien heads—that can be bounced off of for a boost.  Planets’ rings in the sky can be slid down, speed strips on the ground provide huge lifts, and bonuses for gem-attracting magnets, more time, or increased speed are scattered throughout the levels.

All of these things create not only a non-stop, literal thrill ride on each playthrough, but also a game that requires a lot more strategy than one might first suspect.  Although there’s quite a bit of luck involved once you’re up in the stratosphere and flying forward at breakneck speeds, getting to that point often demands speedy decision making and implementation.  Do you continue flying up or dive down to hit a speed boost?  Should you reverse time to jump on that alien head or just pass him by?  Are you going fast enough to make it over the next pit and if not, do you have enough space to back up and try again?

The pits in the game—the third and final way to die—begin after the first 500 meters and appear not just between levels, but dispersed frequently throughout the ground.  These introduce yet another layer of strategy to the game and one of the main reasons for reversing time (or just dying).  Luckily, there’s a pet for that. 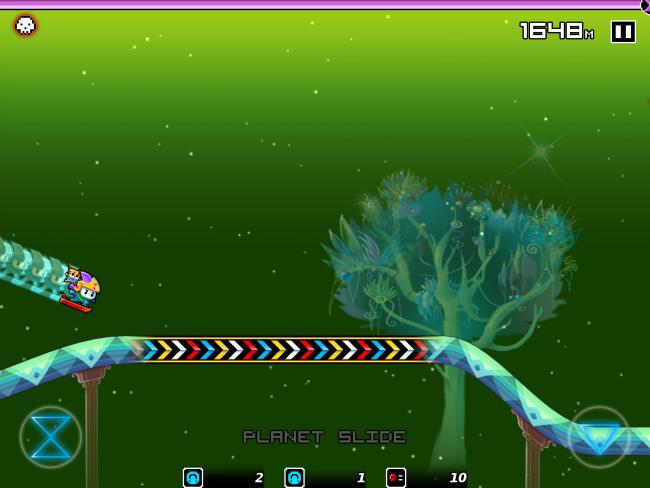 Pets are unlocked as you complete in-game challenges, like traveling 2,500 meters total or jumping on 5 aliens heads in one game, with each challenge increasing your rank by one and each pet becoming available at a certain rank.  Once available, you can pay a pet its required amount of cake and bring it along on your next run.  Not only does this add an adorable friend to your surfer for that attempt, but each pet provides an enhancement to improve your odds: Tiger provides a medium speed boost at the start, Plastic Phoenix will recover you from one pit-related death (assuming you’re out of time power and didn’t reverse your way to safety), and the Fire Beetle will protect against one spike.

The delicious cake your pets love so much is the in-game currency, collectable via floating pieces in levels and by completing challenges.  Although it’s fairly easy to stockpile cake to save for higher ranked pets (who demand more of the sweet treat), it’s also used to purchase costumes and “flair” (different colored trails) for your surfer, making cake a highly valued commodity that doesn’t show up too often within stages.  The plus side is that you can do well without any pets at all—but why would you want to?  They’re so cute. 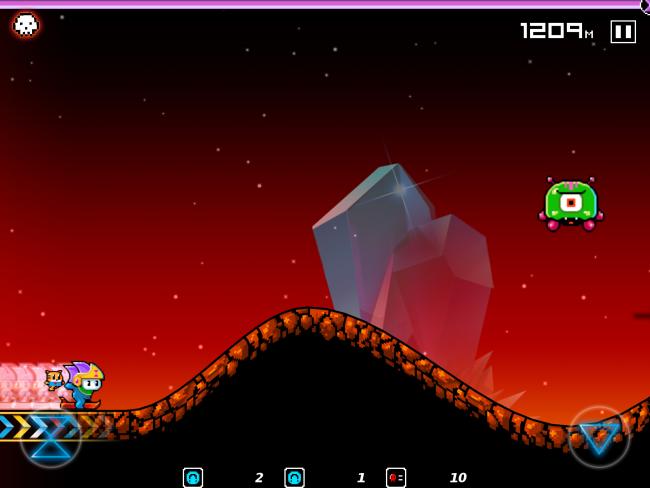 This minor variation in pet vs. non-pet runs comes from the fact that many attempts—despite the increased focus on strategy and player decision—will still be based on luck more than anything.  My best run so far, 4,961 meters (don’t judge), came about with all of three taps on my part.  The rest of the level was just my surfer soaring up and ahead thanks to luckily timed bounces.  It was a truly beautiful thing to watch, but I really don’t deserve any credit for it.

Of course, when Time Surfer does require your input, it’s one of the most rewarding experiences you’ll find in an “endless” game to date.  Even after playing the first 500 meters over and over again, and only seeing the back 3,000 thanks to serious sympathy from the game, I cannot put it down.  The music is stuck in my head, the surfer’s image is flashing before my eyes, and I’m already starting my next run before finishing this sente