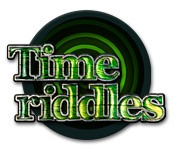 I have to admit I was intrigued by the title Time Riddles: The Mansion and I was eager to explore an old mansion and decipher challenging riddles (as the title implies). However, I was disappointed to find that the only riddle I had to solve was why I was continuing to play a game so poorly executed that it was a chore (rather than a joy) to play.

Except for some glaring typos on the first page of diary text, the game starts out promisingly enough. You stumble upon an old board game with mystical powers connected to an old mansion. At first I thought, “Cool this is going to be like Jumanji,” (one of my favorite books and movies). Wrong. The connection between the board game (and occasionally rolling the dice) is merely a device to enter rooms in the mansion. You have a choice of which room to enter first, but you must complete all rooms on that turn before moving on.

As you progress, you get bits and pieces of a disjointed, uninteresting story about a couple who met, married and lived in the mansion. The poorly written text (with abundant typos and grammatical errors) turned me off so quickly that I completely lost all interest in what happened next to these characters. Sometimes I feel like developers incorporate a story into their games just because they feel like they need a story, not because the story is worth reading, and I definitely got that impression with Time Riddles: The Mansion. There are plenty of examples of HOGs with no or very thin stories that are perfectly enjoyable. Please don’t bore us with a story and paragraphs of poorly written text if the story has no entertainment value.

There are a few mildly interesting things about the gameplay in each scene. Aside from looking for randomly plastered 2D clip art images cluttering the room, you need to find a certain number of jewels in each room. These tend to be the most amusing, often with the requirement of solving a small puzzle (like opening and closing drawers in a certain order or clicking on something until you punch a hole to reveal the jewel). I did find myself solving all of the jewel puzzles right away because they were the most entertaining. Then there are the riddles.

There is one riddle in each scene, and overall their quality is quite inconsistent. Granted, it is difficult to write good riddles, and that’s probably why we don’t see many in games. But riddles should make sense and they should be accurate. For example, one riddle said “What has two heads and a face, but no arms or legs.” The answer was a clock. I think the riddle is supposed to be “What has two hands and a face, but no arms or legs.” I don’t think clocks have heads (but I could be wrong). Some riddles are just way too easy: “I whistle when I’m boiling.” That doesn’t really seem like a riddle to me. If you’ve ever boiled water, you know the teapot makes a whistling noise. Is that really something you have to think about to solve?

Speaking of noise, I was truly disappointed at the annoying “white noise” playing in the background in most of the scenes. Occasionally, a crow would sound off or a clock would tick (in rooms with no clocks present), but that was about it. No music or ambient noises to speak of while you’re searching, which will make those of you who turn off the sound when you play happy to know you’re not missing anything. For me, I like to listen to something, anything other than white noise (which becomes grating after awhile).

In addition to the poorly planned riddles, third-rate graphics, and lack of a sound track, there is more evidence that Azuaz Games rushed or was just not careful in putting the game together. In almost every scene I clicked numerous times on objects with no result. In most games, this is called a “miss-click” or a “missed click.” Sometimes you hear a sound indicating that you have clicked on an object that is not on the list. Some games penalize you for having too many missed clicks. Well, I won the “No misclick” (sic) every time I completed a scene, even though I clicked on many items that were not correct. What does that award even mean anyway? The minigames are also very skippable. They are garden variety match three games, and seem to go on and on with no purpose.

I will say that there is a lot of game to play, with many mildly frustrating scenes to complete (I say frustrating because you really feel like they have no purpose or greater end goal). I personally don’t like sloppily constructed hidden objects scenes of layered, plastered, randomly thrown 2D clipart images where objects rest in odd places, suspended in air. That’s just my personal take on well constructed hidden object scenes. There are so many hidden object games with imaginative stories, terrific graphics, wonderful soundtracks and engaging characters, that I recommend spending your time solving other riddles and not playing Time Riddles: The Mansion.