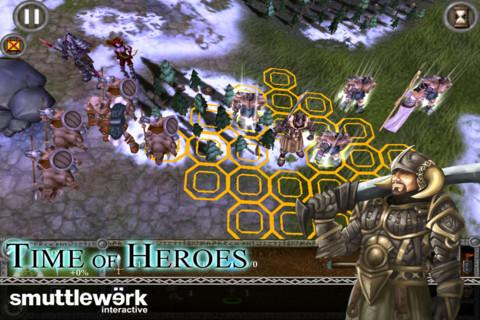 Time of Heroes puts a deep strategy title in your pocket

I’m a huge strategy fan. Have been for as long as I’ve been gaming. I love how every time I’m on the battlefield, things seem to work out a bit differently. I love how no two skirmishes ever feel the same. And I really love it when a game gives me a good mental workout. Unfortunately, most mobile strategy titles don’t feature anywhere near the depth that you’re likely to find on their PC counterparts. That said, strategy fans may want to check out Time of Heroes on iOS devices. It’s not perfect, but this genuinely feels like the closest thing to a PC strategy game on a mobile platform.

The game’s story seems inspired by the Vikings’ early pilgrimage to North America. Prince Minos leads his people on an exodus from their homeland, which has become uninhabitable due to the cold and ice. Once Minos and his friends arrive on the shores of “Altland”, they find the place teeming with all sorts of creatures and races who don’t want to play nicely with their new neighbors.

If you’ve ever played a turn-based strategy RPG, you’ll quickly feel at home here. You start out with a pre-determined number of units in squads assigned to each of your heroes. Once you customize your squad’s loadout at the start of the level, you’re dropped right onto a (fairly large) map and the battle begins. Each level provides you with goals to accomplish, but lets you do so however you want — don’t worry, they’re rarely anything other than to just kill the enemy heroes without losing yours.

This is arguably one of the deepest turn-based strategy games I’ve ever seen on an iOS device, thanks in large part to how units react to one another. Character types are more and less effective against other units, kind of like how Battle Beasts action figures worked with their kooky element symbols (if you’re not a child of the 80s, just think of Rock, Paper, Scissors; it’s the same idea). This is only the start of how the action works, though, since you’ll also need to figure out how different bonuses will affect each unit during a skirmish. There are terrain bonuses (or penalties) to factor in, as well as the effect your heroes’ auras will have on nearby friendly characters. It’s kind of insane how many things you have to consider when it comes to engaging enemies in a fight, but that’s also one of the game’s strongest assets.

Aside from the depth, the other thing to really appreciate in Time of Heroes is just how good it looks. Gameplay features 3D maps and characters, and they all look remarkably solid. When units go head-to-head, you’re treated to an animated battle scene that’s surprisingly frantic. On top of all this, the still images that appear during narrative scenes are truly excellent. 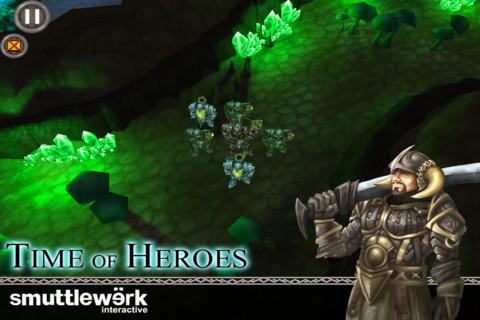 But while there’s a ton of content to enjoy here, the game risks alienating new players thanks to a couple of different factors. First, there’s the fact that it’s really ponderous and slow at first. The story, while epic in scope, is largely delivered via text-heavy dialogue screens. Meanwhile, the animated movements and battle scenes definitely slog down the pace. Thankfully these can be disabled, which does a lot to speed things up.

And there’s no denying that the controls take a little getting used to. Though the game’s intro level does a solid job of walking you through them, they still feel a bit clunky for a couple of levels. Finally, while it’s not uncommon for a strategy game to add more enemies to a map when you’ve reached a checkpoint, this happens often and drastically enough that the game can sometimes feel overwhelming unless you’re playing it on the easiest settings.

Despite what its marketing text claims in the App Store, Time of Heroes isn’t exactly the most newbie-friendly strategy title out there. What it is, though, is an incredibly deep game that’s full of epic storytelling and excellent strategy mechanics… it just might take a little while to appreciate all of this.