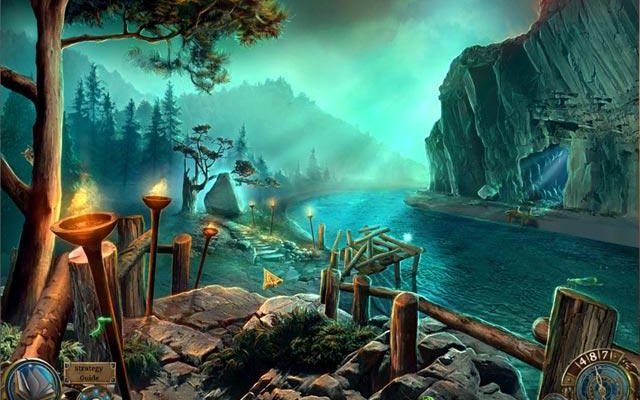 Once again, coast through time as Merlin the Magician’s descendant and unravel a convoluted plot—er…a centuries-old mystery.

You play as Esther, a distant descendant of Merlin and a member of the prominent Ambrose family. Once again you’re confronted by Viviana, a powerful sorceress (and Merlin’s lover and baby mama). This time however, something—or someone—even more sinister is pulling her strings. A domestic dispute between mages is no joke; Merlin and Viviana clash and as a result are both imprisoned, he inside a tree and she inside a crystal. Your job then is manifold: save Merlin and Viviana, identify Viviana’s puppet master, uncover your family history, and unveil a mysterious cloaked figure. (Sigh…the mysterious cloaked figure. I swear, if I never play another hidden object game with a mystery man in a hooded cloak it’ll be too soon.) 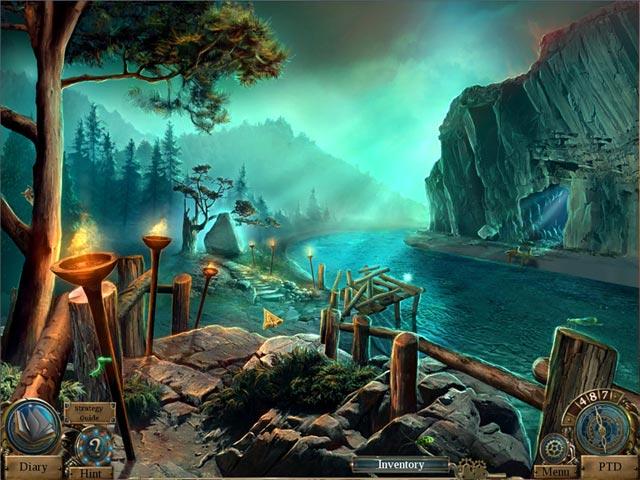 Anyway, The Final Enigma gives you many things to accomplish and the methods for doing so are basically cut-and-pasted from previous games in the series. There’s the basic hidden object formula of exploration/hidden object scene/puzzle. Then there’s the zipping back and forth among times and locations. Using a hand-held time machine, you travel from your time (the late 18th century) back to the Middle Ages and forward to the remote and undefined future. Wherever and whenever you go, your goal is to find missing puzzle items, retrieve pieces of broken machinery and dig up the keys to locked doors and boxes.

The game’s simple puzzles demonstrate a disappointing lack of creativity, but its hidden object scenes are often found in unexpected locations. The scenes are nicely composed and as in previous titles, you have the option to play the hidden object scene as usual, or switch to an alternate match-three mode. The match-three here asks you to click three or more matching colored orbs in order to make them cascade down (as opposed to click-swapping them). The idea is to break through various barriers with your matches, eventually freeing question marks that signify hidden items. The match-three maps get increasingly challenging as the game progresses which, along with the ability to toggle back and forth between modes at any time, is a definite plus.

Other positive hold-overs from past games are the nice-looking environments and the fast-travel map. Environments are varied and nicely painted, and the map/time machine enables you to quickly find and teleport to your next objective. Occasionally, the map sends you to a place that doesn’t actually have anything for you to do, which presumably is some sort of glitch. Other glitches show themselves in the form of missing sound effects, cinematics that stop before they’re finished, and a poor audio mix that allows the music to drown out the voice acting. Further, the game’s ugly 3D characters and blah, text-only reference journal do it no favors. The worst of the game’s problems by far, though, is its story. 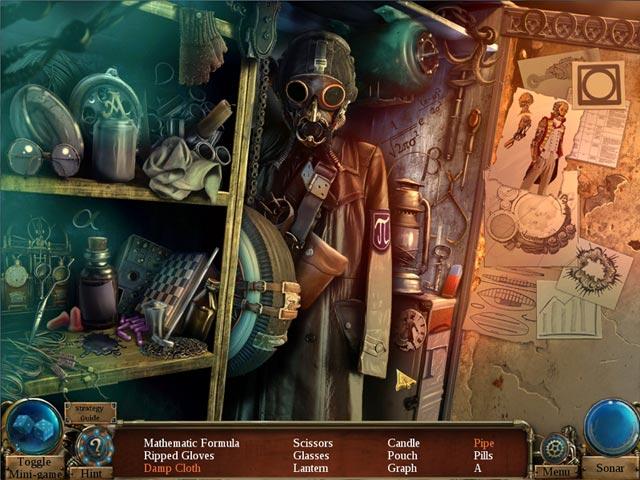 Mention was made earlier of the many main objectives you have in The Final Enigma, and this is symptomatic of the game’s larger narrative issues. What exactly is your goal? Finding out who you are? Freeing your famous ancestors? Catching a villain? Righting past wrongs? Preventing the destruction of the world? At the start, nothing makes much sense and despite the many things you do and the many characters that pop out of the woodwork, none of it ever gets much clearer. In fact, the game’s end comes as something of a surprise. In the middle of opening boxes, unlocking doors and replacing items as usual, a cinematic suddenly plays and a voice-over explains how everything worked out in the end. It’s highly off-putting, and is a familiar problem suffered by past Time Mysteries games.

The collector’s edition comes with a bonus chapter that tells much of the same story from the perspective of a different character (which funnily enough, doesn’t do anything at all to clarify things). Characters are basically ignored in this extra hour of gameplay as the focus moves exclusively to opening locks and repeating hidden object scenes you’ve already played. This chapter too ends weirdly. Aside from this unsatisfying add-on, you’re also given access to the same hidden object scenes you’ve already played multiple times, a mostly unnecessary strategy guide, character bios (which after the game, allow you to figure out who the heck everyone was), location descriptions and screenshot wallpapers. 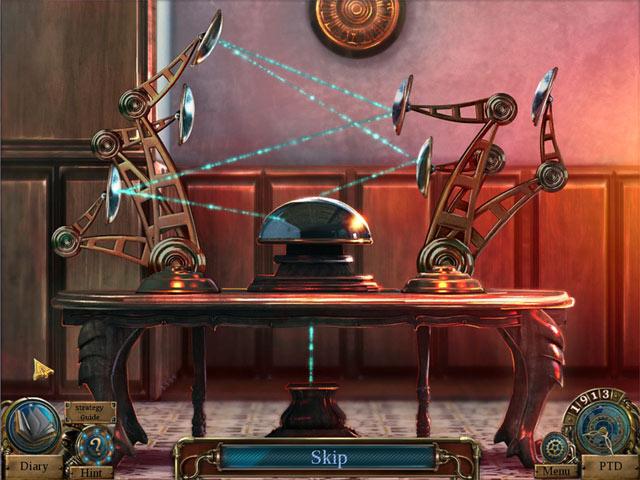 Time Mysteries: The Final Enigma couldn’t be more aptly named. Not only because it entails time travel and revolves around various mysteries, but because its story, the motivations of its characters and your motivation as a player are total enigmas. Although its environments are nice and there’s some fun to be had in the form of nicely constructed hidden object scenes and an optional match-three mode, the game’s poorly-conceived plot and recycled gameplay keep it from being a winner.

The Last One Review