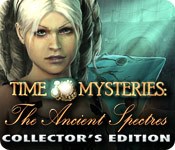 Help Esther defeat an evil sorceress that wants to destroy her family’s history.

Time Mysteries: The Ancient Spectres combines a few standards in the hidden object realm: the game’s major setting is in the 1800’s, you’re first introduced to a dilapidated, abandoned mansion, a ghostly spirit is haunting your travels and the game is quite moody overall. The story here is an interesting one however, and as you gain the ability to travel to different centuries, you’ll be met with challenging hidden object scenes and puzzles every step of the way.

The Ancient Spectres follows Esther, a woman out to learn more about her lost family tree (she thought herself an orphan), who comes across the decaying family mansion, which is, of course, full of mysteries. As you start to explore the mansion, you’ll inadvertently free a spirit your family had captured in a crystal years before – Viviana. Apparently, years spent inside a crystal hasn’t toned down Viviana’s hatred for your family, so you’ll need to right your wrong and gather elemental seals to once again trap Viviana inside.

Early on, you’ll come across a time travel device that allows you to travel to important moments in your family’s past, in one of two buildings. This device serves as an incredibly helpful map, giving you symbols for rooms you’ll need to visit, or those you’ve yet to enter. It also serves as a fast-travel hub, even within the same time.

Regardless of the time period, you’ll spend plenty of time completing standard hidden object scenes (find items on a list), with scenes being massive, complex junk piles. Most scenes come with a color palette containing many shades of gold, orange or brown, and these can be incredibly difficult to complete. The object naming is fine here, but some items may be incredibly tiny, or you might only be able to see a fragment of the object, as the rest is buried.

The hint button recharges in about a second in the game’s casual difficulty setting, but if you wish to skip playing hidden object scenes altogether, you can switch to a match three game on the fly. Rather than swapping tile locations a la Bejeweled, you’ll instead simply click on groups of three or more like tiles to remove them. However, these levels quickly become just as difficult, if not more so, than the hidden object scenes themselves, with tiles being locked in cages or otherwise unavailable.

The game’s puzzles are unique, and may ask you to place lanterns on a map so that every street is lit, or rotate images to create related themes of items or stories to unlock doors. It would have been nice if some of these puzzles contained more detailed instructions, but with enough patience, you should be able to determine what to do before the Skip button fills.

While puzzles are actually fairly few and far between in this lengthy game, hidden object scenes are not, as you’ll frequently complete the same scenes over again to find different items. The art is the same each time, but the items on your list differ. Unfortunately, you’ll see specific items that you know will be necessary later on in the game, but won’t be able to pick them up until a second, third or even fourth trip back to the scene. Sure, you’ll take away an important object each time you play the scene, but it would have been nice to receive at least more than one object at once, so that the scene repetition didn’t become so draining at the end of the game.

With Time Mysteries: The Ancient Spectres, you have an interesting, and mostly entertaining combination of hidden object scenes with the time-travel mechanic that adds a new, but familiar feature to the game. As you travel throughout the mansion in more than one time period, it can become a bit confusing trying to remember which version of a specific room existed in a specific time period, but with the in-game map, this can quickly be resolved. Even though the hidden object scenes are incredibly repetitive, this is still a recommendable experience that will last you longer than most, making it worth the cost of admission.