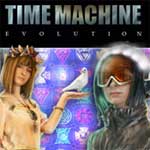 Whether it involves hitting 88 miles per hour in Deloreon or flying around space in a bright blue police box, the idea of time travel continues to fascinates us. It has to be said, however, I’m not sure anyone ever considered that merely matching up three coloured shapes in a line would be enough to power us forward in time. That’s Time Machine: Evolution‘s precedent, though in fairness, the plot is little more than a sideshow.

Indeed, while the game’s introduction sets you up as a girl keen to travel forward in time to rescue her missing father, in truth this narrative barely registers. What Time Machine: Evolution actually focuses on is matching three coloured shapes, either in a row or in a column, on an 8×8 grid. Using what amounts to a paint-gun at the bottom of the screen, you fire at the shapes by clicking the mouse when over your target, aiming to recolor those sat next to two matching colours in order to form a chain. The chain then disappears from the grid, the shapes above filtering down with new additions to fill up the screen.

Naturally, there’s more to play that simply matching up lines of three. Key to progression is capturing the crystals that sit in the middle of some of the shapes. These can only be snapped-up when caught in the middle of a cleared chain, and as you move forward from stage to stage, the number you need to collect rises. Needless to say, managing to snag the target number increasingly relies on some hectic, fast-paced action.

The fast pace is triggered by the game’s abundance of power-ups. Activated when you clear four or more shapes in a line, these power-ups come in all shapes and forms, from those that add time to the clock or freeze it for a short period, to those that blow up whole lines or even sectors of the map. After every successful level you’re given the option to unlock these power-ups, each one then upgradable a further two times and, in truth, progress relies on you making good use of these essential tools in your arsenal.

‘Super power-ups’ also come into play, but these rely on your time travellers’ mood rather than any icons on the board itself. With a gauge measuring our hero’s temperament the whole time, her mood lifts whenever you manage to pull off a combo, reams of shapes flying off screen setting off her smile. Get her gauge high enough, and the super power-ups will kick off, tornadoes sweeping across the grid, for instance, wiping out anything and everything they come across.

It’s events such as these that send you spiralling towards your total, quick match-ups and lines of four literally sending Time Machine: Evolution into a spin and knocking gem after gem off the tally, often without you even realising why. Yet, the game’s learning curve is such that it never becomes easy or overly comfortable. Though every level essentially hands you upgrades to your arsenal, so things get more difficult; lines of four harder to find, new colours finding their way into the mix and ever higher numbers of gems needed to progress.

In between each batch of levels (the game splitting them into ‘time periods’ to signify your progression through the ages) come one or two random puzzles – jigsaws that have to be finished within a time limit for bonus points, as well as a take on patience, turning over cards to match up the same symbols as in the main game.

It all adds up to a very swish match-three puzzler that really doesn’t put a foot wrong. In fact, its only slight fault is actually as a result of Time Machine: Evolution’s otherwise free sense of play. Lesser games would block play off while some of the super power-ups were in motion, dominating the grid as they do, but Evolution lets you carry on, shooting at shapes as the pandemonium erupts. However, if the colour due to be shot from your paint gun happens to be one that can’t be played on the grid, the game doesn’t switch shades until the hussle-bussle is over – a touch annoying when you’re left high and dry.

Time Machine: Evolution boasts an innovative paint-gun mechanic, and is as playable as any match-three puzzler you may have come across before while perhaps not being quite as polished. It’s unlikely you’ll feel like you’ve travelled in time while playing, but Time Machine: Evolution is certainly fun fuelled enough to ensure you lose an hour or two in the process.