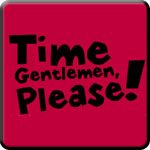 Hopping backwards in time to prevent the invention of the coat hanger, Ben and Dan inadvertently muck up the bulk of western history.  The pair arrive in 1945 only to find their tampering with the timeline has somehow given Hitler an army of dinosaur clones!  Their time travel device broken, Ben and Dan set off on another hilarious point-and-click adventure in an effort to smooth out the wrinkles in time and get back to a present they know and love.

Small tweaks are noticeable in the first few moments of play.  The character models, while still functionally the same, offer up more detail and shading.  The environments look drastically better as well.  Silhouetted foreground objects provide a subtle layer of depth that really does a good deal to set the mood of a location.  None of the set pieces in Time Gentleman, Please ever feel empty or sparse.  The team at Zombie Cow have done an incredible job creating an engaging game world despite the game’s silly nature.

Lending to this newly-honed atmosphere is the introduction of music.  The total lack of music in the first game stood out like a sore thumb, especially given the adventure genre’s great reputation for memorable scores.  Original music by Nakhman and Swith set the mood in every scene and environment.  It’s remarkable the power a well-composed soundtrack has to draw you into a game, and the music in Time Gentleman, Please is no exception.

Other small changes like a redesigned inventory layout and the introduction of a map system, really help to improve upon an already impressive formula.  The only thing about the presentation that seemed troublesome was the lack of full screen support — something that the first game offered up willingly.  The real improvements, however, goes well beyond cosmetic upkeep.

The story in Time Gentleman, Please is a cohesive and engaging narrative that, while certainly silly, will keep you on the edge of your seat.  Unlike the first game most characters played a vital role in the bigger picture.  Characters weren’t simply part of the puzzle, they were part of the story.  As a result you’ll be revisiting many of the cast at different points in your adventure, which in turn helps to create the illusion of reality that is required of great fiction.  It’s pretty hard to get lost in a story when the only relationship the protagonists build is with the player.  Time Gentleman, Please never suffers from that.

A good adventure game is made up of two things; a compelling story and challenging puzzles.  It probably comes as no surprise that Time Gentleman, Please has improved on these as well.  So much so in fact that some folks might have trouble finishing this story off.

But the increased difficulty isn’t the only thing that would classify these puzzles as "improved."  What really stands out is how intricate they are.  At the end of the game you’ll have to remember things that you thought were irrelevant diversions from hours earlier.  Objects that you’ve gathered half an adventure ago will need to be combined and taken to old locations to tackle new problems.  Solutions, for the most part, aren’t just handed to you.  This is in stark contrast to the fairly simple puzzles that popped up throughout the first game.  Things may start off just as easy, but as the game progresses you’ll need to really think things through.

The only sticking point to be had with this sequel is the same that we had with the first: the adult content.  The humor in this series, while consistently wonderful, is also wonderfully inappropriate.  Language and adult situations came up with some regularity in the first game, but what’s seen here puts it to shame.  The language and situations here are a fair bit raunchier than last time around, and while that’s definitely going to please fans of the first game, that means this game is not going to be for everyone.

One of the few places that the humor did seem to be toned down a bit was in its references to LucasArts.  The references are still there, but at the same time this game felt less like an homage to games of the past and more like it was carving its own place in adventure gaming history.  Asides from the occasional Monkey Island quote, the use of gaming history felt more like a part of the story and less like a love-laden tribute.  You’ll find both a playable text-based adventure and a playable SCUMM-style adventure starring Hitler, but neither feel like they were forced into existence.  References to nerdery of the past, be it old school gaming or Fawlty Towers quotes, somehow found a way to illicit a nostalgic smile rather than a fanboy guffaw.

Unlike Ben There, Dan That!, which left us wanting more, Time Gentlemen, Please! offers up a full-sized plate of gaming goodness that leaves us satisfied and stuffed.  Weighing in at around 6 or 7 hours, the game easily offers twice the experience of its predecessor.  It’s a good thing too, because this one’s not free.  After exchange you’ll be spending about five US dollars, which, while cheap, is definitely a lot different than the $0 price tag of Ben There, Dan That.  Thankfully, the game is worth far more than the price they’re asking.  If you’re a fan of adventure games and can handle the blue humor, Time Gentlemen, Please! is an absolute must.