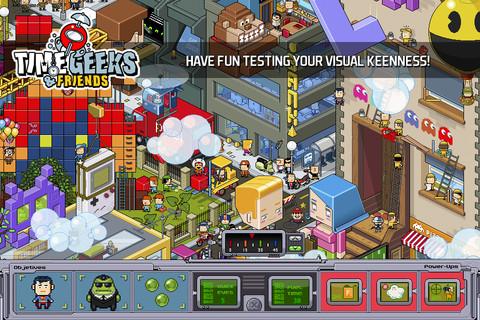 You may be a geek, but you’re also a time traveller, so…it kinda’ balances out.

Asynchronicity is the new black. Hero Academy, Draw Something, Song Pop, Outwitters; not since tennis have we seen this big a focus on the back-and-forth. Not all game types are created equal, though, and Time Geeks & Friends seems to test the limits by filtering hunt and find through the magical asynchronometer. If there’s one thing I know, however, it’s that asyncrhonometer is not a word. Oh, and also? This idea works pretty well.

Building off of the charm of the original Time Geeks: Find All!, developer Ivanovich Games is back to give the item search genre yet more new life. Where the original made its mark by wrapping classic mechanics in an aesthetic shawl packed with pop culture references, humor, and vibrancy, Time Geeks & Friends innovates by taking that show on the road. Competing against either your Game Center friends, random users, or anyone for whom you know the username, you’ll square off in a high score battle defined by which player can track down a shared set of obscure targets across three different rounds. Whoever starts the match plays rounds one and two and sends the first volley, after which the second player tries to kick it up a notch. All of this culminates in a third round that determines whose score – and ego – will reign supreme.

Part of what makes Time Geeks & Friends so delightful is the way its core concept is so obvious in retrospect. Part of me enshrined books like I Spy and Where’s Waldo in the halls of nostalgic innocence, remembering them either as solitary puzzlers, or calling back to quiet moments spent with friends in libraries and book stores hoping to unlock the secrets of a quaint universe together. In truth, however, isn’t the hunt and find experience just as ripe for elbow-nudging, page-covering competition?

A few games in, and you’ll be hard pressed to say no. Everything from the stress that mounts as your timer ticks down from ten, to the frustration of a botched round, to the anxiousness that mounts as you’re waiting for the results of your opponent’s third and final round, knowing you’re only twenty points apart – it all exposes another side to the hidden object coin. By removing the experience from the page and asking you to test prove skills at a time-honored activity, Ivanovich had me asking why no one’s thought of this idea before; perhaps the best question you can find yourself asking when exploring a game.

Second best, though? “Why can’t I find Link from Legend of Zelda on the beach from Lost!?” Time Geeks & Friends retains its visual panache, and bombards you self-awarely with off-brand references to TV shows, movies, video games, and comics that keep the modern object seeker invested in the little worlds through which they’re combing. It’s hard to get frustrated that you’re not going to find the wayward cat you’re looking for when half the reason that’s true is because you’ve spent a good portion of your allotted time just soaking in the zombie apocalypse he’s lost in – Plants vs. Zombies reference and all. Mechanically, too, the game’s cornucopia of colors are best described as ordered chaos: a seemingly random assortment of objects that cleverly hides-by-design all the things you’re looking for. 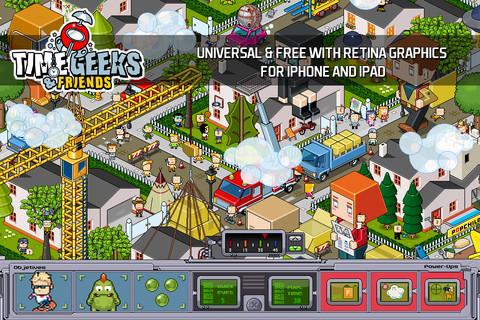 Unfortunately for a lot of modern mobile games, implementing in-app payments seems to be an achilles heel that drags down otherwise clever concepts. And while I’d like to be the bearer of better news, Time Geeks & Friends is no exception. Best described as “paymium,” the game charges $2.99 at the door, and then asks you for one of your 15 available “tokens” in order to take any action – play a round, purchase a power-up. It’s also very important to make the distinction here: a complete game with a friend or foe is composed of threerounds. I’d take you further down the rabbit hole, but you can see where this is going: in a game where asynchronous play already means a fair bit of waiting, the coin system here tarnishes the respect Ivanovich seems to have for the player in design and concept. Fun feels gated behind unnecessary restrictions meant to earn more income from your play time.

Meanwhile, the imbalance continues in the things that you can’t pay for. The game’s wide array of avatars, for example, which would be a neutral stomping ground for payment, are left locked behind gates that open when you earn higher rankings: something that can only happen by expending tons of tokens on play. As a suggestion, the virtually unadorned “kids” mode that allows for unbound singeplayer searching with no time limit or progression would have been a perfect place to allow for coin earnings. Even a reduced charge of one coin per full game would have made the experience feel more balanced, allowed for more organic staggering of cool down times, and rendered payment an option. As it stands, however, Time Geeks & Friends’s otherwise entertaining, polished veneer begins to crumble at times under the weight of its seeming greed.