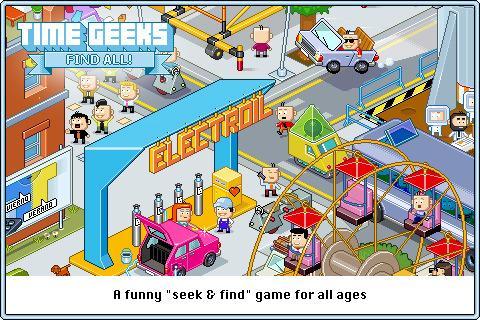 You’d be hard pressed to find many a critic willing to heap praise upon the Where’s Waldo books, but even those of the highest esteem would admit those puzzles were mighty addictive. My old school library might have been teaming with literary classics and books on the arts and history’s great wars, but it was those paperbacks littered with pictures of the lanky chap in the stripy jumper that dominated everyone’s time.

In truth, it’d be a touch remiss to describe Time Geeks: Find All! as Where’s Waldo for the iPhone generation, but there are certainly obvious similarities. For starters, like those oh so famous books, this is a game primarily concerned with hunting down objects in the midst of a clutter of others.

The story, though superfluous, is nonetheless entertaining. It’s your task to track down missing items aplenty lost in a distortion of time caused by an attack by an alien race called the Zoorgs. Ultimately, picking up a collection of energy capsules to restore the world to its previous state is your long term aim, but these can only be accessed once all the other assorted bits and bobs have been accounted for.

Indeed, it’s the sheer range of items you’re tasked with finding that forms the fundamental difference between Time Geeks and theWhere’s Waldo challenges of old. The targets – which aren’t always human – change from stage to stage, and it’s not an exaggeration to suggest that some of them are ridiculously well hidden.

Essentially each level is nothing more than a largely inanimate picture, your job being to scan around and zoom into the beautifully constructed isometric stages with your fingers. Once you spot your target – or, indeed, targets – a touch is all that’s required, each level letting you guess wrongly twice before kicking you off if your third pick goes equally astray.

Throw in a ticking clock – levels generally giving you 60 seconds or less – and you’ve got a game where the pressure is well and truly on. What’s more, there’s no easy ride should you have a second crack at the same stage, with the game sensibly shifting the target with each and every go. It gives Time Geeks the kind of longevity a Where’s Waldo book just can’t muster.

But the game doesn’t stop there. Indeed, Time Geeks is far too savvy to restrict play to mere find and seek action. In between each round are a whole host of extras that attempt to reach out to players on a far more personal level. 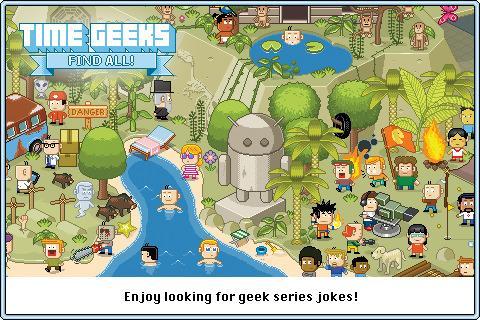 Case in point, after the first batch of levels – which take place on a tropical island of sorts – you’re given the opportunity to piece together your own little paradise, winning items that you can then place at will and, in a rather smart move, share with your friends on Facebook.

This is, in fact, just the start of the add-ons. Other mini-games thrown in for good measure include a monkey catching task – where, in a take on Whac-a-Mole, the task is to catch monkeys as they pop their heads out of holes whilst simultaneously avoiding the scores of rogue human heads that make an appearance – a penalty taking game, and a challenge to catch streakers running onto a sports field.

All such games offer the kind of variety other titles would kill for. Indeed, almost by stealth, Time Geeks blossoms into a mini-game monolith the longer you play.

But it’s the main mode, beautifully presented and skilfully delivered, that deserves the most accolades. Just as addictive as you might expect, and with the added bonus of being able to show off your triumphs to friends and foe alike – both Game Center and OpenFeint are supported – Time Geeks: Find All! is the kind of game you won’t put down for a whole host of reasons.

Texting of the Bread Review