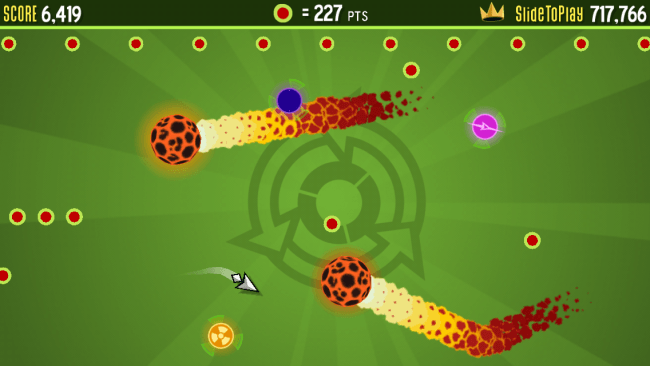 You can never have too much of a good thing

We’ve all had our App Store obsessions. Whether it’s the sneakers you’ve burned through in Temple Run, the mileage you’ve logged in Real Racing 3, or the family you’ve spent more time with in The Sims Freeplay than you have your own, we’ve all been bitten by the “just once more” bug when it comes to our pocket games.

The first game to bite me was Tilt to Live.

Released back in 2010, it was the sort of game that personified the “easy to learn, hard to master” mantra that defines great game design. Players would tilt their devices to control a defenseless arrow while avoiding an ever-growing collection of deadly red dots. Power-ups would temporarily turn you into a pointy little Rambo, but in a matter of seconds you’d be back to avoiding the dots and scrambling to reach the next power-up.

It was beautiful in its simplicity and infuriating in its challenge. In a word, it was love. Now, three years later, developers One Man Left have returned to the game that started it all.

Tilt to Live 2: Redonkulous sticks very closely to the “if it ain’t broke, don’t fix it” school of game design. Veterans of the first game will feel right at home with Redonkulous, so much so that they may find themselves wondering what makes this worthy of the term “sequel.” But the differences, while subtle, are there.

The most noticeable of these is the new assortment of weapons; you’ll find things like a double-bladed lightsaber (it has a different name, but the mock-John Williams score gives it away), a meteor that bounces around the playing field, and even a disguise to fool the dots into thinking you’re one of them. It’s a fun little collection of weapons (and I’m sure we’ll unlock more as we play), and each does a great job of adding to the mayhem on screen.

Of course, new weapons would have been the bare minimum in a sequel such as this. One Man Left manages to introduce two other improvements that change the experience for the better, and they do so in a substantial way.

There’s a new multiplier system that’s based on tricks. These tricks are probably the most valuable change to the formula for high-score junkies who live on games like Tilt to Live. You’ll discover them through the course of play, with some words popping onto the screen whenever you’ve accomplished one. Dribble a meteor against a wall 3 times, that’s a multiplier. Match 3 nukes in a row, that’s a multiplier. The more you play, the more you’ll discover – and those discoveries can mean big points if you manage to string them together fast enough.

And while not as game-changing as the tricks-based multiplier, Redonkulous introduces boss fights that really help shake things up. Survive long enough and you’ll trigger one, with each providing a different challenge. I’ve encountered a few in my review time, from a “lights out” maze challenge to a chainsaw-wielding death machine.

Other little touches, like the occasional “dot bomb” that needs to be diffused, a sharper level of polish, and a catchy soundtrack round out the improvements you’ll find in Tilt to Live‘s first sequel.

It would be easy (and perhaps accurate) to accuse One Man Left of not taking any chances with Tilt to Live 2: Redonkulous. But then again, can you blame them? They went in a completely different direction for their brilliant 2012 strategy game Outwitters, and you didn’t even bother to play it. WHY DIDN’T YOU PLAY IT?!

I’m not going to blame One Man Left for playing it safe on this one. Tilt to Live 2: Redonkulous is just as much fun as its predecessor, and that’s all you need to know. If you’re looking for tilty, frantic, arcade fun – just like the first game – this is a must buy. Make it happen.