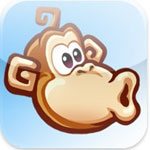 Maybe it’s because I grew up watching those Kurt Russell movies with chimps like The Barefoot Executive, or maybe it’s because I used to play Monkeys in a Barrel with my little brother (I usually won) when we were kids. Fact is, monkeys (or chimps) are synonymous with FUN! True to form, the monkeys in RealArcade’s Tiki Towers deliver loads of monkey-style humor and merriment.
Your challenge is to construct, destruct and solve problems all the while helping the monkeys get where they need to be to retrieve their beloved bananas. You have bamboo, coconuts and vines to work with. And the physics are really quite good. Subtle movements or the wrong placements will cause a tower to topple or a bridge to break down.
Unlike some other physics-based iPhone games I’ve played, I love the way the Tiki Towers is very forgiving. For example, if your monkeys are climbing a bridge you’ve just constructed, and it starts to collapse, you can quickly re-build it before they fall off into the abyss. There is also an “erase” feature that allows you to make any changes needed to your structures.
Tiki Towers is very light-hearted in its approach, with sound effects and music to match. I very much enjoyed the soundtrack playing in the background while I tried to figure out how to help the monkeys get their fruity snacks. The images of the monkeys are clear and bright and just adorable. The animation is well thought out with facial expressions and cute sounds and movements. The monkeys are so engaging that you want to help them along, which is especially motivating as the game gets more difficult. I started to feel like the monkeys were my friends, and I couldn’t let my friends down!
My only gripe is that once in a while it is hard to get the screen to scroll over so that you can see the rest of the scene. Sometimes it just doesn’t move. However, this is only a minor annoyance that is far outweighed by the enormous fun factor of the game.
You can’t beat the value offered by Tiki Towers. There are four islands with nine levels per island, so you can play Tiki Towers for hours and hours on your iPhone. I was excited to find out that you can also play a version of Tiki Towers on the Wii. That sounds like fun! I’ll have to call my brother over for a friendly competition. He hates that I can still beat him at games.