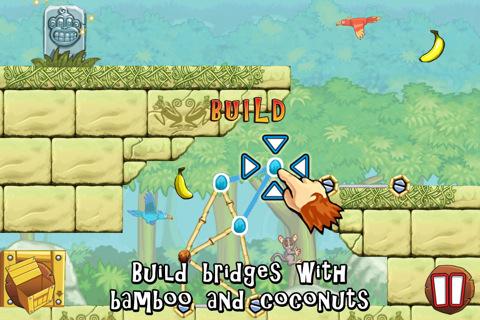 Tiki Towers 2 offers physics fun, but doesn’t monkey around enough with the formula of the first game

Back when iPhone gaming was still in its infancy – in a faraway land we call 2008 – GameHouse released a fun little physics game called Tiki Towers. Sure the game borrowed liberally from World of Goo, but at the time there was literally nothing else like it on the iPhone. Now, more than 2 years later, Tiki Towers 2 has hit the App Store – and very little has changed since its predecessor’s debut.

For those who skipped the original, let’s get you up to speed. Players in both Tiki Towers games are given a specific number of bamboo poles. They’ll need to use these poles to construct a safe climbing structure for a group of monkeys, who will climb all over it – like monkeys do – to get to an exit. Build smartly and you’ll be able to gather bananas that are dangling throughout the stage, and maybe you’ll even finish a level without using every piece of bamboo at your disposal. Build structurally unsound and it may crumble under the weight of the monkeys.

Unlike the original, there’s something of a story this time around. The plane that previously dropped crates of monkeys prior to the title screen in the first Tiki Towers has been shot down by an evil monkey dictator. Players will work their way towards the evil monkey’s island fortress in an attempt to get back everything the villain stole from the plane. It’s a fluffy, silly little story that’s really only told in a matter of seconds, but it provides an added layer of cuteness and sets the stage for Tiki Towers 2 new stage selection interface, which takes the form of a map of the island.

As far as new elements go, don’t expect to find much beyond little touches like the stage selection. A handful of new items like magnets and stretchy string help shake things up a bit, but there’s no single game changer that makes this experience feel like a huge improvement over its predecessor. What’s more, some of the problems that were easy to overlook in an iPhone game from 2008 still remain in the 2011 sequel. Scrolling around the levels can be a massive pain if you swipe your finger anywhere near a buildable area, and often you’ll have no other place to swipe it. This can lead to accidentally placed bamboo pieces that are a hassle to remove. What’s worse, some of the stages in Tiki Towers 2 are large enough that you’ll need to scroll frequently, leading to an ongoing sense of frustration. 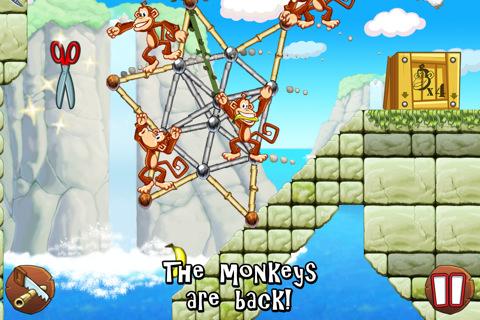 Thankfully much of what we loved about the original has survived in the sequel too. The level design is still sharp and fun, and the art direction remains bright and colourful. It’s not often we’d consider a statement like “this game looks exactly like it’s three year old predecessor” a compliment, but when it comes to Tiki Towers, both games are bursting with fun visuals and charm.

Still, if you’re new to the series, Tiki Towers 2 isn’t a great value for its initial $2.99 price point when compared to the original Tiki Towers. Tiki Towers 2 only offers 30 levels, while the original Tiki Towers can be purchased for 99 cents and features a whopping 54 levels. Sure there are new twists to the gameplay in Tiki Towers 2, but there’s nothing so great that it really warrants the extra purchase. Despite the lack of levels though, we’ll give bonus points to GameHouse for offering this as a universal app, allowing players to monkey around on their iPad’s at no extra cost.

Fans of the original will be delighted to have more Tiki Towers at their disposal, but at the same time, there’s not enough new here to really wow anyone. Had these 30 levels been included as a free update or in-app purchase for the original, nobody would have batted an eyelash. Still – if you finished the 54 levels of Tiki Towers, have powered your way through World of Goo on the iPad, and are still looking for more, Tiki Towers 2 provides a fun enough time for fans of the genre.