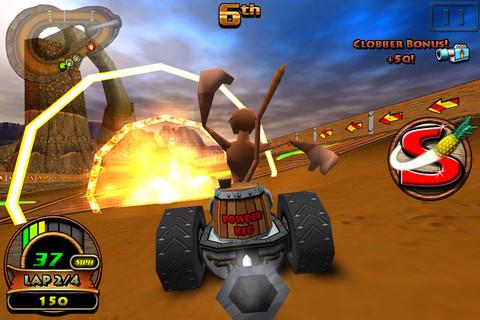 The original Super Mario Kart was released in 1992, kickstarting what would become one of gaming’s most popular franchises and perhaps the biggest spinoff series of all time. If you’re good with numbers you’ve already realized that this year marks the 20th anniversary of Nintendo inventing the “kart racing” genre, and in that time approximately eleventy bajillion clones have come out aping the formula left mostly unchanged by Nintendo. It’s no surprise that they’ve been permeating the App Store and Android Market, so today we’re taking a look at Tiki Kart 3D.

You’re probably familiar with the generic kart racing formula, but just in case you’re not, here’s what’s up: You have a selection of karts with different stats available to use in circuits of tracks. Each of the 5 circuits contains a three track series available at 50cc, 100cc and 150cc. You’ll start at the first circuit in the 50cc class and work your way up through the faster “cc’s” until you unlock the next circuit. Rinse and repeat until you’ve unlocked everything and come in first place every time. Random power ups can be picked up at set points along the tracks that allow you to attack your opponents. Anyone who has ever played a kart racer before will be immediately familiar with what they’ll find.

Tiki Kart 3D uses tilt controls for steering while pressing anywhere on the screen allows you to accelerate. Though you can adjust the sensitivity of how your kart responds to the tilts, this is another example of a game that has failed to convince that tilt controls on a phone are a worthwhile pursuit. When combined with some seemingly sloppy physics modeling, the steering just isn’t as responsive and reactive as an arcade-y genre like kart racing needs to be. Some people might not mind how it feels, but I wish that they would have included the option to choose all on-screen controls.

You’ll find everything you’re looking for in a basic, no-frills kart racer here…except multiplayer. There’s usually only so long you can stand racing the AI over and over before you need the human element. Multiplayer has become a staple of the staying power of this genre for a long time, and its absence from Tiki Kart 3D is glaring.

Otherwise the game is pretty nice to look at, and has a goofy spirit and decent sound. I was definitely impressed with the number of graphics options that you can tweak to get it running well for your particular phone (in the Android version). The game itself even realized that it wasn’t running as quickly as it wanted to, and made the suggestion to turn some options off for me.

Tiki Kart 3D is pretty close to being a really fun, nearly must-have game for your smartphone. If some of the problems I addressed above were to be patched, than I’d definitely be willing to sing the game’s praises from on high. As it stands now, Tiki Kart 3D is a worthwhile free title if you’re looking to carry around a Mario Kart clone in your pocket.