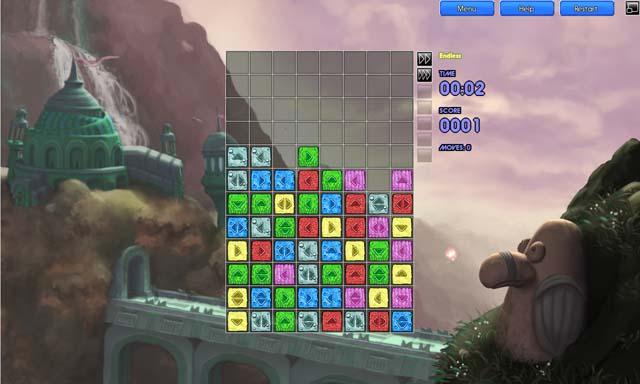 Swapping’s out, streams are in with this innovative match-three puzzler.

Tidalis promises to take you to unexplored realms, both through its fantastical storyline and its fresh take on the match-three puzzler. You’ll still be matching up some familiar coloured blocks, but the way you do it differs considerably from other games in the genre. Rather than your typical Bejeweled-style swap-a-thon this is all about making use of “streams.”

Left-clicking on a block causes a “stream” to shoot out in a direction dictated by its own little arrow. This stream usually extends a maximum of three blocks away from the source, but aligning three or more blocks of the same colour will extend the stream’s run and, ultimately, cause the blocks to disappear.

The blocks themselves remain fixed in their positions. Rather than moving them, you can change the direction each block’s arrow points by right clicking and dragging accordingly. By dragging across multiple blocks in this way you can sketch out a quick and easy route for the stream to follow.

When the blocks above drop down to fill the newly vacated space, they create their own additional streams. If you’ve queued the surrounding blocks up correctly, this can lead to a massive cascade effect.

Involved as that may all seem, those are just the basics. Tidalis layers on gameplay variation upon gameplay variation, some of which serve to transform the game completely. Not only are there the overarching modes of Adventure, Puzzle, Quick Game and Custom Game (not to mention online cooperative and competitive multiplayer modes, although there was no one playing at the time of this review), but there are dozens of subtle and not so subtle variations contained within each.

Take the main Adventure mode, for example. This essentially provides a structured taster of what the game has to offer, with each level bound together by a light hearted (and slightly ill-fitting) story. You’ll be introduced to diversions from the main formula ranging from the predictable to the game-altering. 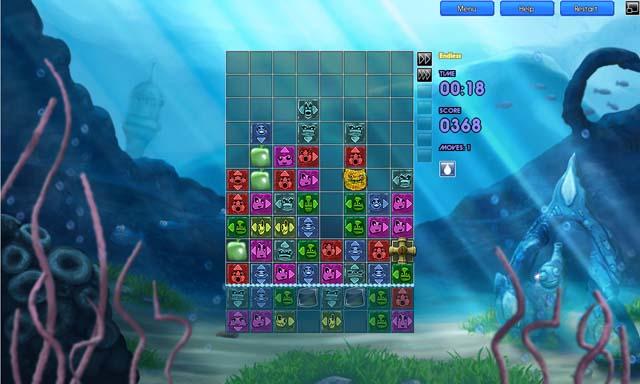 Zen fits into the former group, tasking you with accruing a certain number of matches or points within a limited number of moves. At the other extreme we have the likes of Graviton, which changes the fundamental rules you’ve been playing with up until that point. Now gravity plays its part, diverting the streams onto a downward arc when they travel further than a single block. They also travel further when made to flow downwards, opening up intriguing new chaining possibilities.

Fortunately you don’t have to plough through the inherently linear Adventure mode to access these mutations. Quick Game and Custom Game both let you experience such radical variants as Sun And Moon (only two types of blocks, and you must alternate between them) and Line Clear (which lets you eradicate whole lines like a traditional match-three puzzler).

We haven’t even mentioned the 21 types of Special Blocks or the ability to make your own levels. There’s just so much to do in Tidalis, it can all be a little overwhelming.

Indeed, that hints at the game’s key problem. Sometimes it feels like there’s too much going on. This feeling stretches into the very core of the game – the stream-based combo system. It’s extremely difficult to deliberately engineer multi-layered chain reactions, with the vast majority of them tending to come through blind chance.

The game encourages you to form such combos on the fly, but the streams move so quickly it can be difficult to react in time. Even if you do, you then need to have the composure and steadiness of hand to manipulate the blocks quickly using the click and drag technique. Too often I found myself frantically (and randomly) ‘scrubbing’ the screen with my mouse pointer.

You do start to read the blocks better with persistent play. What you never quite learn to overcome is the frustration of waiting for the right blocks to drop.

Certain game modes call for you to be very selective over which blocks you target. You may need to match 10 each of blue, green and yellow, for example, but no more than 70 overall. It can be very frustrating if you’re just waiting for a line of yellows to appear, the inability to move blocks directly compounded by your inability to move them indirectly (thanks to that overall match limit).

To complain about such sore points seems a little churlish, though, when they stem from the very thing that makes Tidalis unique. Placed in the context of Tidalis‘s remarkably generous package, which attempts to tackle this oversubscribed genre from a unique angle, it’s easy enough to let the negatives slide and just go with the flow.