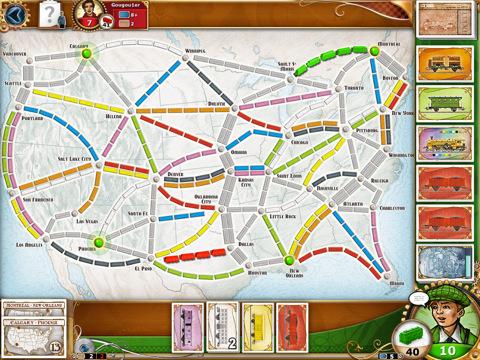 Ride the rails with one of the greatest board games of the last decade… now on the iPad!

In the world of modern board games, few titles manage to stand out as absolutely essential to own. Settlers of Catan. Carcassonne. But of these must-play titles, only one seems to stand out head over shoulders whenever the folks I know sit down to play: Ticket to Ride. Now the folks at Days of Wonder have brought Ticket to Ride to the iPad, and it’s nearly everything we hoped it could be.

Originally releasing back in 2004, Ticket to Ride is a board game about trains. Players attempt to connect two cities together by purchasing a variety of different routes on a map. To do this, they’ll collect different colored cards which they’ll essentially use as currency. A green route with four links in the chain will require four green cards to purchase – that sort of thing. Connecting cities and buying routes earns the players points, and at the end of the game the player with the most points wins.

The challenge lies in knowing which routes to buy, cutting off routes for the competition, and knowing which Destination Tickets (the cards that tell you which cities to connect) to hang on to and which to discard. It’s a game with simple rules, surprising depth, and a nice blend of luck and strategy. Anyone can pick it up in only minutes, and the playing field is generally level enough that after getting a few games under your belt you’ll be able to go toe to toe with the average Ticket to Ride veteran. It’s simple, it’s engaging, it’s fun, and it’s been played by millions of people around the world since its debut in 2004.

The iPad iteration not only retains all of the gameplay that made the board game so great, but it does so with a gorgeous presentation and intuitive controls. The beautiful maps have all been delicately reproduced here, alongside the card art and the general feel of the game. Characters that had previously only appeared in instruction manuals or on the box are brought to life as avatars and menu characters. The music and sound effects are a perfect match for what’s on screen. Overall, this is a beautiful package.

When you first boot up Ticket to Ride, you’ll have access to only a single game mode – the USA map featured in the original release. Since 2004, a number of spin-offs and expansions have been released and Days of Wonder has included many of these here as in-app purchases. At launch, players can purchase the USA 1910 expansion, Ticket to Ride Europe, and Ticket to Ride Switzerland.

The inclusion of these is remarkable for a number of reasons. First off, it’s almost impossible to discuss these expansions (or the main game, for that matter) without mentioning the price. On the Days of Wonder website Ticket to Ride Europe goes for $50. The USA 1910 expansion goes for $20. Switzerland is out of print and goes for an arm and a leg on eBay. You’re picking up this new content for literally pennies on the dollar. 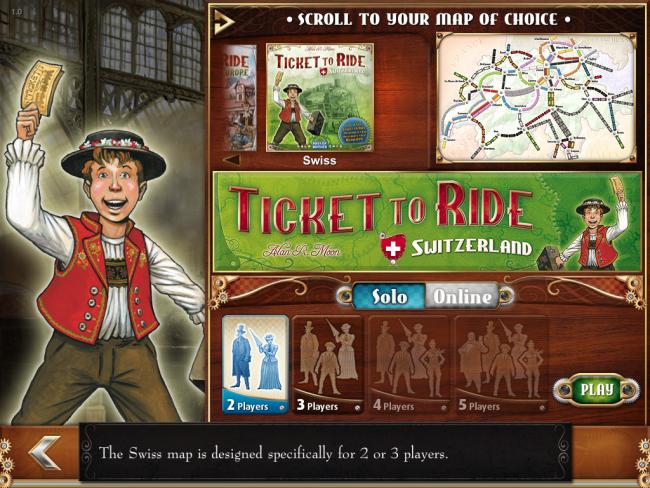 More important than money, though, is what this additional content brings to the table. We’re not just talking about new maps – we’re talking about whole new experiences. Switzerland is a smaller map designed for only 2-3 players and adds new gameplay elements like tunnels and country-to-country tickets. Europe brings in the idea of train stations. USA 1910 brings in a variety of Destination Tickets. These are expansions that radically modify the base gameplay, and Days of Wonder managed to not only include them, but to get them working flawlessly.

There are other expansions and editions out there for the print version of the game (Nordic Countries, Europa 1912, Marklin), so we’ll keep our fingers crossed that Days of Wonder decides to add those too.

Multiplayer games are a sublime experience here. After playing for seven straight hours (and even then, only stopping because my iPad’s battery life went kaput) I didn’t experience a single game where an opponent dropped out early. What’s more, players across the board seem to be quick about their moves and comfortable enough with the game to offer up a nice level of challenge. Whether it speaks to the accessibility of the game or some smart design choices on the part of the developers, there’s nary a frustration to be had with the multiplayer experience – or should I say, nary a frustration to be had with the online multiplayer experience. 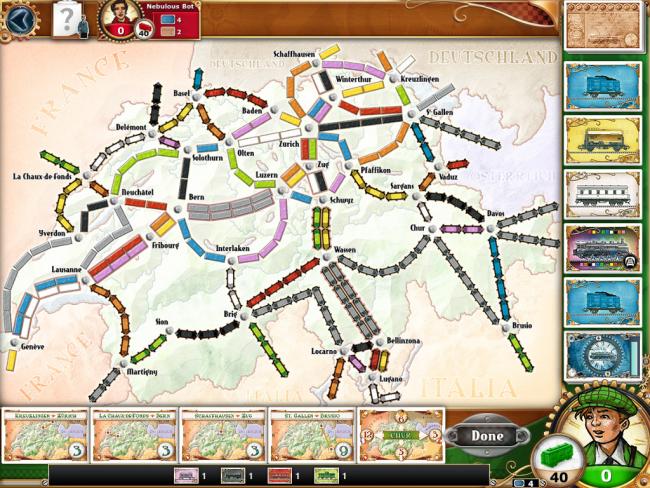 Ticket to Ride on the iPad only has one real shortcoming, and it’s a biggie – the game lacks any form of local multiplayer. Sure you can play a solo game against AI opponents, but if you want to pass-and-play with your wife, friends, or co-workers, you’re completely out of luck. On the one hand, I can see the issue – if more than one person is playing on the same device, how do you make it so that opposing players don’t see each others cards? On the other hand… come on. Ticket to Ride is a board game, and like all board games it’s meant to be enjoyed with friends. Removing that face-to-face competition takes a lot of wind out of the game’s sails, and may even be a dealbreaker for some. After all – not everybody likes to play online.