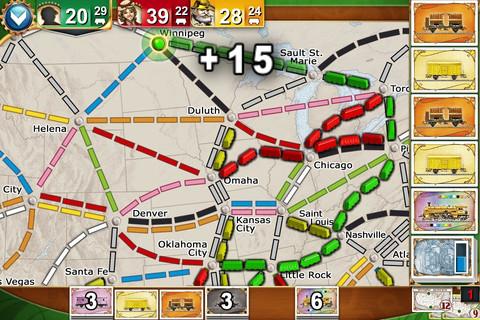 For the uninitiated, Ticket to Ride started life as a board game back in 2004 and has since been adapted to a number of digital platforms, including Xbox Live Arcade and the web-based Ticket to Ride Online. As far as digital versions go, where Ticket to Ride shines brightest is in the iPad edition released earlier this year. Hence why we were so excited by the prospect of putting that very same experience in our pocket.

In Ticket to Ride, players are attempting to create a railroad empire as they complete tickets that connect one destination to another. To do this, they’ll draw different colored cards that match the colors of different routes on the board. Once a player has enough of a certain color to claim a particular route, they place their trains on the tracks and prevent other players from using that connection (unless you’re playing with a lot of players, but that’s getting into a little more detail than this review demands).

While the experience between Ticket to Ride Pocket and the iPad version is largely the same in terms of gameplay, there are a number of things missing from Pocket that can’t go without mention. For one thing, there’s no online multiplayer. Ticket to Ride is always at its best when played against live competition, and the online matches found in the iPad version have provided this humble reviewer with dozens upon dozens of hours of entertainment. In Pocket you’ll be flying solo – unless you want to do pass’n’play multiplayer or wireless group play in the same room.

The other thing that’s missing here? Content. On the iPad, players have the opportunity to purchase a variety of maps as in-app purchases, letting them experience the fun of existing Ticket to Ride board games like Ticket to Ride: Europe and Ticket to Ride: Switzerland for only the tiniest fraction of the cost of the real thing. On the iPhone, there’s none of that. You’re given the one USA map from the original 2004 release and nothing more. You can’t even purchase the USA 1910 expansion that allows for new destination tickets and the “Big Cities” variant that’s proven so popular over the years. 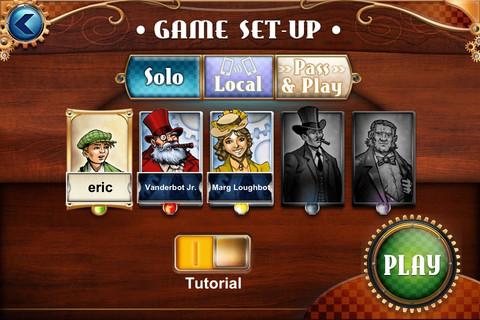 Days of Wonder argues they have good reasons for excluding such things, and when you hear why, it’s hard to disagree. “We care deeply about the online experience Ticket to Ride Online players get worldwide,” they’ve stated in an official press release, “and are not willing to compromise it with the issues inherent to mobile play (impromptu phone calls, spotty cellular coverage, etc.)” Fair enough – can’t argue that point. “The other maps offered in Ticket to Ride for iPad have a level of details (placing train stations in cities, etc.) that currently does not lend itself well to the screen size of current mobile devices. Rather than provide a sub-par game experience, we chose to keep those out.” While it doesn’t explain the USA 1910 absence, this too, seems like more than enough reason to kill the downloadable content.

Still – having good reasons for leaving something out doesn’t make it any more palatable to the average consumer.

On the plus side, though, the mechanics that made the iPad version so successful are still intact. Cards are easy to select, routes are easy to place, and the player info is still clear, concise, and easy to understand. And ultimately, Ticket to Ride is still Ticket to Ride, no matter what form it takes.

Despite all of its shortcomings when compared to the iPad build, Ticket to Ride Pocket is still an excellent portable adaptation of one of the best board games of the last 10 years. It may focus on the single player, and you may not have a variety of maps to choose from, but as a nice budget priced app, Ticket to Ride Pocket could prove to be a great point of entry for gamers not familiar with the series.