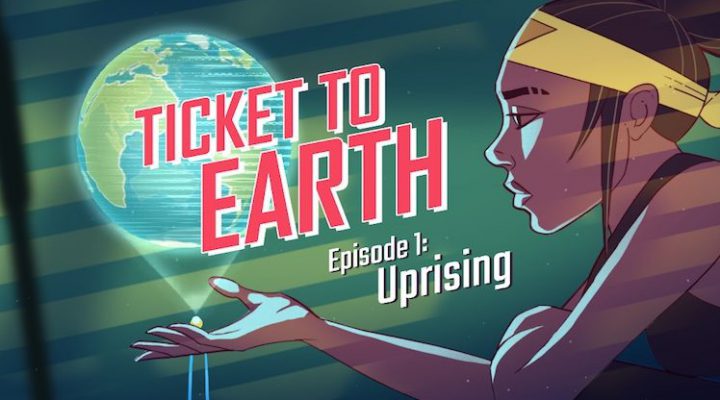 Level challenges become a nuisance and a chore

My experience with Ticket to Earth elicited a roller coaster of reactions. Initially I was curious, stemming from all the praise I’d been hearing. Then I was feeling kind of blah about the story and characters. I found myself wishing the core mechanics were a bit more involved, only to round the bend and find that things do indeed get more intricate and interesting as the game progresses. And finally, I found myself extremely frustrated: Ticket to Earth suffers from the same “cheating” opponent AI as other combative puzzle games like Puzzle Quest, and that really puts a damper on the experience.

In Ticket to Earth, a greedy corporation is selling tickets for a fancy shuttle that will allow passengers to leave the drab and I guess backwoods-y planet of Mars and return to the much more swanky Earth. The tickets are super expensive, so all the hard working martian citizens/colonists who deserve it more can’t actually afford to leave, thus creating just a wee bit (read: more than a wee bit) of unrest. On top of that, some violent criminals have been plotting an escape to maybe overthrow of the local government (?), so it’s kind of a mish-mash of plot threads. The story truly kicks off after the prison break, with normally helpful machines going all homicidal and wiping out all but two of the colony’s law-abiding citizens. Guess who you play as! 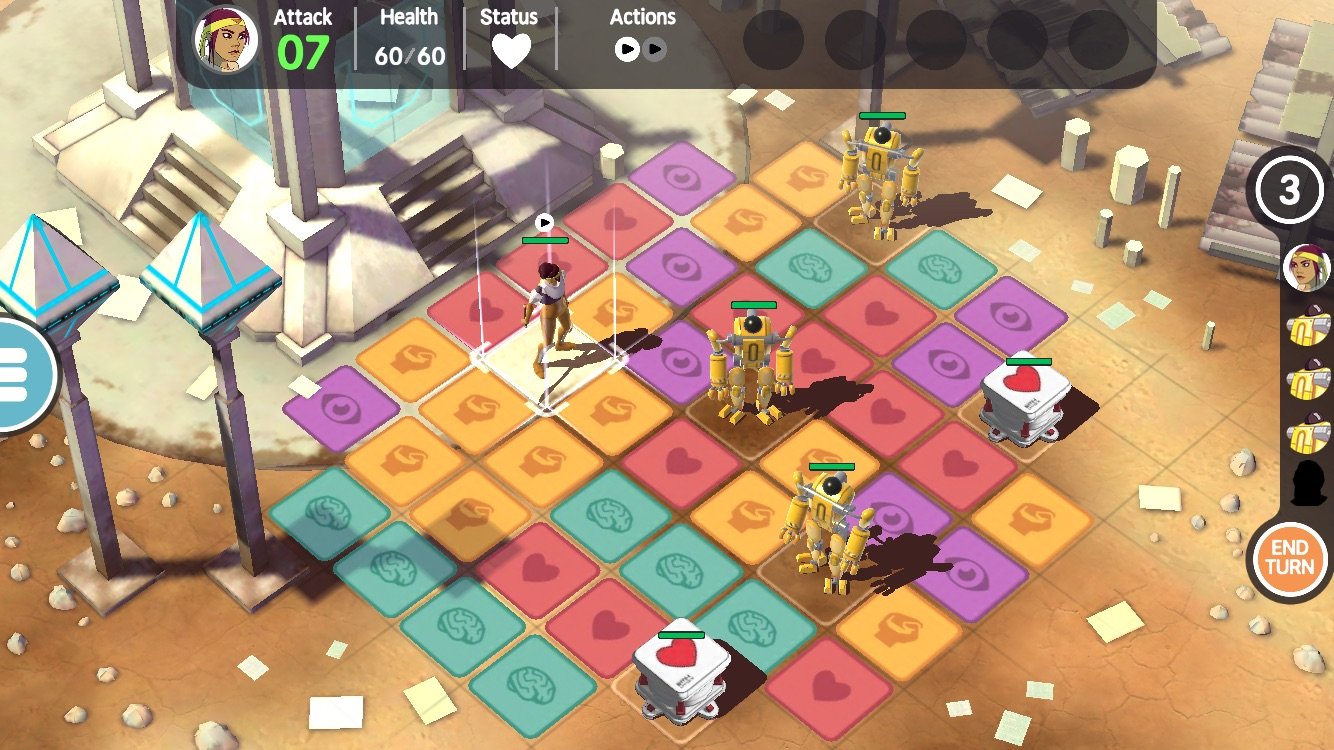 Oh, and then there’s “The Grid”. I think it’s supposed to be sort of like chakras and using the energy in your environment to help you fight, but really it’s just an expositional reason for playing on a grid of colored puzzle tiles. I kind of wish the reasoning was left out, but I guess thumbs up for taking the time to try and justify it via story elements?

Weird plot stuff aside, there’s an enjoyable game to found be in Ticket to Earth. Each level has you facing off against enemies on The Grid. Your character gets a total of two actions per turn that can be used to move or attack. If they’re within range of an enemy, they can attack — but by traveling over more puzzle tiles (you trace a path through connected like-colored spaces) you can increase your base damage. So if you move over enough spaces first, you can hit really, REALLY hard.

Enemies can do the same, of course, and each type behaves a little differently in terms of how far they can move overall and so on. It’s a cool combination of puzzle elements and turn-based strategy that works really well in practice. 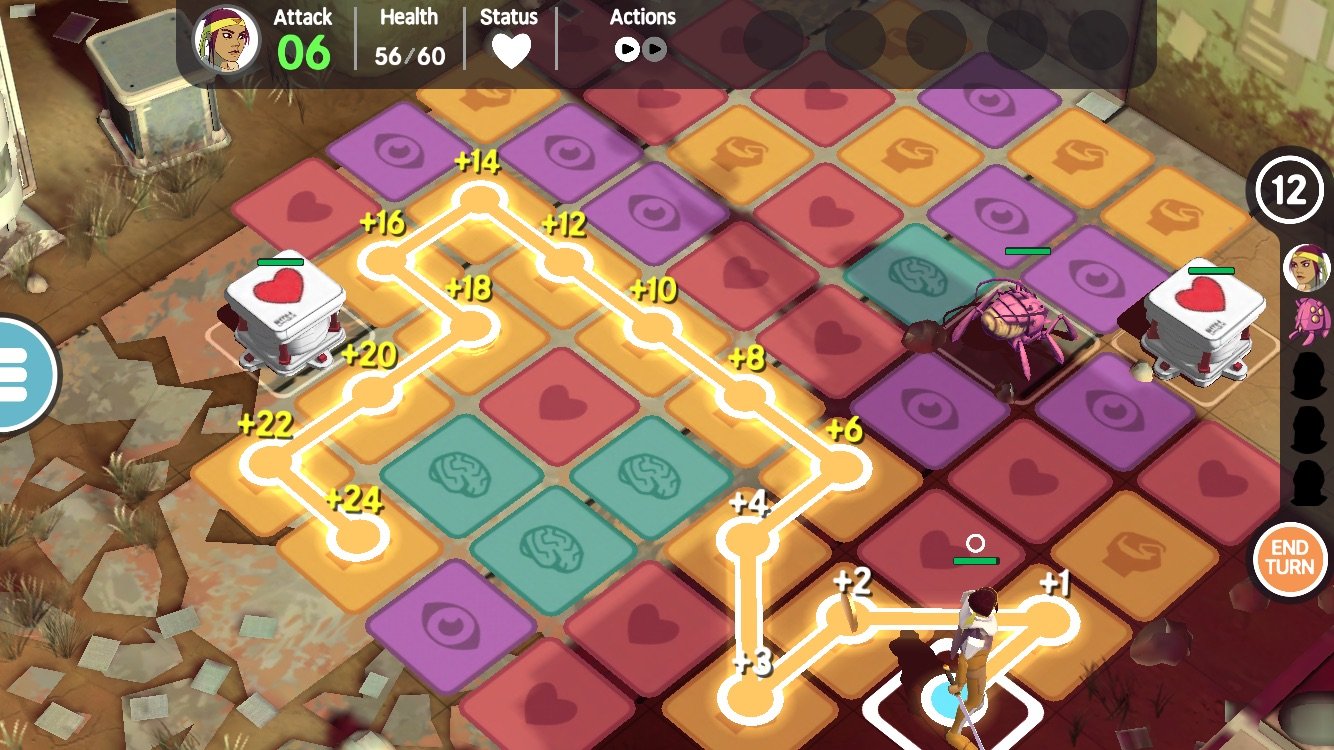 It takes a little while for things to get more complex than simply “move to store up more damage,” but it gets there eventually. After enough missions are complete you’ll be able to do much fancier stuff, such as upgrade your character with special powers and grant them lots of different passive buffs. For example, you can (with the right skills) regain health by walking over Heart tiles or increase a gun-wielding character’s range by walking over Eye tiles. You can also try to complete various level-specific missions such as defeating X number of enemies in one turn or finishing the stage with full health, which both adds an extra layer of challenge and is actually useful because the medals you earn from doing this are necessary for passive character upgrades. So yeah, lots to do and good reasons to do it.

Unfortunately, these challenges quickly become either too difficult to complete until you get stronger or are actually impossible to finish due to random tile placement. For example, defeating an enemy on the first turn doesn’t seem particularly tough, but good luck actually doing it when your starting Grid layout has no grouped tiles that allow you to get within range of an enemy. Thankfully you can easily replay past levels to go after those bonus challenges, but it’s still annoying to find yourself checkmated by randomness as soon as the level begins.

That’s really just a nitpick, though. A much bigger problem is the tendency for the new tiles that appear (after I move my character and clear some out) being extremely beneficial to enemies about 90% of the time. For example, I’m close to death and want to put some space between me and a giant roach. So I spend two actions crossing as much of The Grid as I can while also collecting a bunch of tiles along the way. Cool. But then the tiles that pop in just so happen to provide a path of like-colored tiles for the stupid bug anyway. Or there’s the tendency for the tokens I need to collect in order to power up my screen-clearing ultimate attack to appear right next to enemies – who then, of course, proceed to walk over and steal said tokens from me on their turn. I’m used to randomness in puzzle games, but I can’t stand it when that randomness seems to favor the AI at such an absurd rate.

There’s a really cool and enjoyable puzzle strategy game in Ticket to Earth. The problem is all the supposedly random bits end up making things feel unfair. Failing a level because the tiles happened to spawn in a way to help an enemy chase me down isn’t challenging, it’s cheap. Missing out on collecting important items on the board because they often appear where enemies can grab them first isn’t fun, it’s frustrating. I really, really want to like Ticket to Earth, but I just don’t have the patience for its poor balancing.