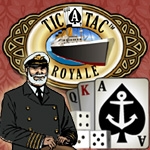 Evidently, Tic-Tac-Toe and casino games are also a fine combination – as you’ll find out in Tic-A-Tac Royale from Uclick and Playtonium.

This clever fusion of classic pen-and-paper and gambling games, set against the backdrop of a cruise ship storyline, is a surprisingly enjoyable one for casual game fans. It’s not perfect, but worth climbing aboard.

As told through the entertaining story sequences, it’s about 100 years ago or so and you are caught with your fiancee as stowaways on a cruise liner, S.S. Tic-A-Tac Royale, en route to the U.S. from Southampton. You’ve snuck aboard to start a new life together in the new country, but don’t have a dime to your name. The steward makes you a deal: master the game of Tic-A-Tac and you can stay onboard for free. In fact, if you do well you can make enough money to upgrade your cabin from the lowly steerage (the bowels of the ship) to bigger and better cabins through the 3rd class, 2nd class, 1st class and then captain’s class.

Also, before we continue, I should mention it took me close to a week to realize you can take other cruises from one country to another – though it wasn’t clear from the main menu this was a pull-down option at all! Other cruises refer to different days on the ship in which to reach your goals. Capetown to Bombay, for example, is five days in the game, whereas San Francisco to Hong Kong is 10 days.

Tic-A-Tac Royale lets players to interact with various shipmates, place a small wager as an “anti” and then begin playing the game, be it 21 (“Blackjack”), 21 Drop, Poker, Poker Drop, Poker Duel or Tic-A-Tac Dice, to name a few.

So, just how does Tic-Tac-Toe meet, say, 21? Well, a Tic-Tac-Toe board is comprised of a 3×3 grid, of course, and in a game of 21, or Blackjack, you must draw cards that total 21 points, such as an Ace (which is worth 1 or 11), a Nine and a Two. So long as these three cards make a row vertically, horizontally or diagonally, you’ll receive some money for totaling 21 and you must continue to flip cards and see if you can make 21 in the other rows, too. If you pull a card you don’t like you can toss it into the discard pile. Players only have a limited amount of time to complete this game.

Once in a while you’ll be invited to a special Captain’s game, where you could win a cool million dollars, if you’re able to 21 in every row. It’s no easy task.

A variation of 21 called 21 Drop, lets players drag one face up card over another to swap its place, in order to make your 21 points. So, in this game, you’re not drawing from a faced-down deck.

The game does a good job tying all of these casino games into a larger story about you and your fiancÃ©e, as you’re trying to upgrade your cabin, raise money for your new life and take new voyages.

A few nagging issues remain, however, such as advancing far through the game, only to find it didn’t ask me to continue when I launched it again, which means my saved game was deleted somehow (though my high score was still there). Another possible technical glitch is when two music tracks were playing simultaneously.

Overall, however, Tic-A-Tac Royale offers a unique spin on casino games, with lots of game-play to sink your mouse into. Perhaps if the developer can iron out some interface issues (not seeing the additional voyages) and possible technical bugs, it would be an extraordinary game instead of just a very good one.