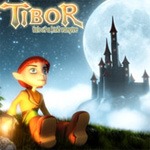 Vampires are a dime a dozen these days. From the Buffy the Vampire series to the recent tween phenomenon Twilight, it seems that everyone is trying to cash in on these bloodsuckers. Cateia Games tries to turn the traditional views of the creatures of the night on their collective pointy ears in Tibor – Tale of a Kind Vampire. Unfortunately, like the creatures themselves, the game turns to dust in the morning sun.

Tibor is a kind (well, I suppose you figured this out from the game’s title) painter in a small unnamed, presumably eastern European town. He is in love with a woman named Agness – or Agnes, depending upon which cutscene you see, more on this later – but her father refuses to let Tibor be with her. One fateful day, a woman named Countess Sibilska arrives to have her portrait painted and – surprise! – bites Tibor, turning him into a vampire. However, he still has goodness in his heart. Nonetheless, the townspeople drive him out, and Tibor begins his quest to cure his vampirism and find a way to be with Agnes(s).

The first thing you’ll notice about Tibor is the graphics. Cutscenes are displayed in a beautiful oil-painting style, and are even fully voiced. In-game graphics are mostly 3D with great backgrounds rich in detail. There are even some stunning visual effects like out-of-focus details in the foreground, making the world seem to come alive.

Unfortunately, that’s where the praise stops.

Everything else about this game is a mess. Tibor is a platform game, which means you’ll be spending most of your time walking towards the right and jumping. Tibor runs using the left and right arrow keys, looks down with the down arrow, and jumps with the up arrow. He also can throw green vials at his enemies with the space bar. It is all very unwieldy. The classic platform game Super Mario Bros. – a game you may not have played yourself, but is definitely a part of pop culture – knew a separate jump button was a good idea back in 1985. How 25 years later someone didn’t come to the same conclusion is a mystery.

Controlling Tibor is difficult. You can change direction in mid-air, but not in a good way. Tibor’s jump is very floaty, and often hard to land. He also moves so quickly that you’ll often get hit by an enemy that didn’t even appear on screen yet.

Hit detection is sloppy at best. You’ll see Tibor falling through surfaces at the most inopportune moments, or collide with an enemy you were certain you were about to bop on the head.

Speaking of which, the enemies are beyond brainless. Wandering back and forth on a short set path, turning in mid-animation just doesn’t cut it. For instance, frogs will leap forward, seem to hit an invisible wall, turn around and start hopping the other way. The problem is every single enemy acts this way. From townspeople to bees to mice to cats to bats, they all aimlessly meander.

By the way, that list of enemies up there? That’s basically every enemy you’ll encounter in the game’s 32 levels. Certainly the settings change – you’ll travel through the village, a cemetery, a forest, a large castle and a canyon – but nothing fundamentally changes. There is one final boss, but is so simple that it is tantamount to throwing bottles at a brick wall. The music is not very memorable, and repeats so frequently as to become annoying.

There are some weird level design mysteries too, like how a vampire can walk around in full sunlight. The levels are often half-finished, with a quick press of the down arrow revealing places where the map simply vanishes.

You are graded after each level based on how many coins, diamonds and treasures you pick up (why would a man on a quest for his soul care about money?) and how many “secret places” you can find (you may wander somewhere and see the words “SECRET PLACE” scrawled all over the screen to know you’ve found one). The percentage you find, though, is meaningless to your progress. Other than some secret levels found by finding the letters T-I-B-O-R (which, by the way, are as boring as the rest of them; best to leave them hidden), there are no unlockables or trophies here.

Also, the Bad English bug strikes again. The cutscenes are by far the worst offenders, replete with gems like “He was completely exhausted, but still managed to scrape the remaining energy.” (Translation: Tibor was tired, but found reserves of strength, but it sounds like someone trying to get the last of the ice cream from the container). There are even incomplete bits of programming, like a sign saying “<Hint 22_Rock Not Found>”.

But worst of all, you simply won’t care about Tibor by the middle of this short game. What starts out as a sympathetic story quickly falls flat. Since the only reason to keep playing is to see how the story progresses, you’ll see no reason to finish.

Basically, this game is a mess. With the only thing going for it being a pretty face, Tibor – Tale of a Kind Vampire needs a stake driven through its heart, and can be blissfully ignored. To put it bluntly, Tibor is Ti-boring.