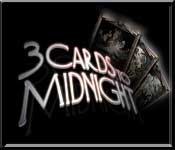 Three Cards to Midnight is the debut release from Big Finish Games, a new studio that’s stacked with veteran talent, including many of the designers who helped to create the Tex Murphy series of adventure games. Three Cards to Midnight itself is more of an adventure / hidden object hybrid, with a unique way of searching for objects and a thrilling, mature story to go along with it.

First of all, let me say this right up front: If you’re the kind of person who likes to skip cutscenes in games and doesn’t care about plot, then you’re sorely missing out. The story – which follows a woman named Jess as she tries to unlock repressed memories with the help of a mysterious Tarot card reader – is one of Three Cards to Midnight‘s greatest strengths. Its themes are mature, at times creepy, and with a definite slant towards the occult. But there are enough interesting twists and turns to keep you intrigued to the end.

The story slowly unfolds as a series of flashbacks, as Jess uses Tarot cards to help her retrace the events of the last few days and regain her memories. With each card she turns over, Jess recalls a particular place, along with key words that are associated with that location, such as “note,” “fire” and “power.”

This is where the hidden object portion of the game comes in. In typical seek-and-find fashion, you’ll search a cluttered scene for specific items. However, Three Cards’ take on the formula is quite unique. Instead of giving you a random list of stuff to find, you’ll search for specific items that all relate back to the key words Jess mentions at the beginning of each level. For example, if one of the words is “note,” you could click on a key (“keynote”), a pad of paper (“notepad”), a book (“notebook”), a 1/4 sign (“quarternote”), and so on.

Clicking incorrectly results in a “miss,” and if you rack up enough misses you’ll have to start the level over again. You’ll start with a limited number of hints, but clicking on correct objects earns you points that will eventually grant another one. Unfortunately, hints don’t carry over to the next level, so you’ll always only ever have about three or four to work with.

Word recognition for the puzzles is good, but far from perfect. For example, for the keyword “light” the game rejected my suggestions of clicking on the word “X-mas” to make “Christmas light.” On another occasion, the game wouldn’t let me click on a wooden ladybug toy to make “toy box.” This proved to be one of the game’s biggest frustrations, since you’re penalized for incorrect clicks.

Mini-games are sprinkled throughout the hidden object challenges, and these range from relatively easy jigsaw puzzles to trickier symbol- and word-based brainteasers. You can skip any mini-game that’s proving to be too frustrating, but the fact that the game doesn’t show the solution of a mini-game if it’s been skipped can be annoying. You might miss an important document or photograph that helps to shed more light on the twist-filled story, which is a shame.

Thre Cards to Midnight offers seven chapters with three levels per chapter. You’re awarded a star rating for each level based on your performance (how many hints and wrong clicks you had, and how many mini-games you skipped), and this comes into play in the final scenario – a showdown that appears to offer multiple endings based on the choices you make. Once you beat the game the first time, you can either play again to try to get higher star ratings, or try one of the other two difficulty settings. In other words, there’s some replay value.

Although I recognize that the story subject matter won’t be for everyone, personally I found myself sucked in by it. It’s well-written, and the cutscenes, all fully voice-acted, are well-staged and compelling. Indeed, Three Cards to Midnight would easily be a 4-star game if it weren’t still a little rough around the edges: in addition to the quirks already noted, the music loops awkwardly, there’s no Windowed mode, and you can’t save the game in the middle of a level. As it stands, the game is a decent thriller for fans of supernatural themes, and a promising start of things to come. I’ll be looking forward to the sequel, Three Cards to Dead Time.

For similar games, try Redrum, Post Mortem and Ghost in the Sheet.