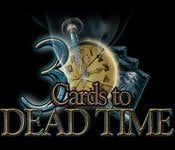 Jess is having what you might call a bad day. Ghosts are talking to her, the guy who killed her parents is trying to track her down, and her long-suffering boyfriend is running out of patience. Oh, and she’s having psychic visions, as well. She’s at the center of a mystery that’s been unwinding for more than 80 years, whether she likes it or not. Maybe she’ll live long enough to find out why.

We first met Jess in 3 Cards to Midnight, an intriguing spin on the hidden object genre that blended clever wordplay with item searches and wrapped it all in an occult blanket. Rather than simply find items for a list, you had to deduce what in the scene made a phrase when combined with a given word. If the word was "day," for example, you might have to find a sun (Sunday), a collection of valentines (Valentine’s day), or a light (daylight). It was a clever and engaging twist on the genre, but some of the colloquialisms made it problematic for anyone not fluent in American English.

3 Cards to Dead Time picks up pretty much right where Midnight left off, but has expanded on the wordplay. The clues are now more forgiving; you might have to find "things ruined by sunlight," objects representing the zodiac, or the opposites of words already provided. It still requires some thought on your part, as the relationships aren’t always immediately obvious, but it makes for far fewer situations where you’re forced to use a hint simply because you’ve never heard a particular phrase before.

Each chapter has several locations to search, with each location providing two or three different types of object to find. Consider carefully, because you can only click incorrectly nine times before you have to completely start over. You earn points for each item you find, and when you reach 100 points, you earn a new hint. The trickier an item is to locate, the more points you net from finding it.

It’s not that the objects are hidden, per se – unlike most HOGs, the locations in Dead Time are remarkably uncluttered – so the challenge comes in figuring out whether or not an object applies to one of the categories you’ve been given. You can switch between categories as you like, just be careful not to accidentally select an item that "comes in pairs" while the "things you wear" tab is active or it’ll count as an incorrect click.

Mixed in with the item searches are several extremely challenging puzzles that are more than the  typical jigsaws or mazes. Your powers of deduction and logic will be put to the test as you sort your way through the clues Jess finds. Instructions are thankfully provided for each challenge, but even so you may find yourself stumped more than once. Skipping a puzzle lowers your overall score for the chapter, but otherwise doesn’t penalize you at all. You can also go back and replay puzzles if you’d like to take a crack at one you passed before.

3 Cards to Dead Time gets every single aspect of its gameplay right. Where it falters is in the storytelling. Finishing a location unlocks a cutscene that plays out a new part of the plot. The events themselves are interesting, slowly spinning out a twisty tale of the supernatural, but the voice acting is atrocious and the CG characters are poorly done.

The game also does a poor job of catching you up on the action of its predecessor. I played 3 Cards to Midnight, and even I was a bit lost at first. It all gets pieced together eventually, but anyone unfamiliar with the first game is going to be very confused for the first few chapters of Dead Time. You can skip the cutscenes and simply read the summaries at the end of the chapters to find out what happened, but it does make you feel like you’re only playing half the game. Because…well, you are.

If the acting doesn’t bother you, then 3 Cards to Dead Time is simply a must-have. It’s one of the smartest, most unusual takes on the hidden object game that you’re ever likely to play, and its difficulty settings ensure that you’ll be challenged no matter what your skill level. If you’re turned off by the occult, however, be aware that this game is drenched in it.