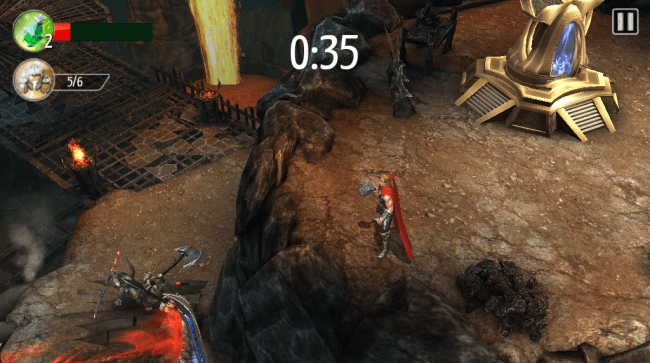 If ever there was a Marvel superhero crying out for an awesome video game, it has to be Thor. I mean, we’re not talking about some guy in tights; he’s the freaking Norse God of Thunder! A really good Thor game should make you feel like you could put the tablet down and go lift Mjolnir yourself. I’m sad to say that despite a game effort by Gameloft, Thor: The Dark World does not quite prove itself one of the worthy.

It’s hard to say exactly what kind of game Thor: The Dark World is supposed to be. Sometimes that’s good, as coloring outside of the normal genre lines is always welcome. It’s not so good when the game is hard to categorize because the parts don’t all fit together.

In this case, there’s a narrative, nicely animated and voice acted. No problems there, as the production values are first rate – and they should be, because this game is taking up a lot of memory for a mobile game. Loki is scheming for the throne of Asgard, as always, but there’s also a threat from a group called the Marauders (not the X-Men villains, alas). Thor is on the case, and he’s got help.

Maybe too much help, honestly. Yes, these are Asgardian threats menacing five of the Nine Worlds and not Earth criminals, but Thor gets a ton of assistance. Some comes in the form of allies like the Warriors Three, Sif, and Heimdall. There’s also the Asgardian answer to cannon fodder in the Einherjar, consisting of NPC fighters, Valkyrie, and other Norse warriors you can spawn to fight alongside you.

Or rather in front of you, at least a good deal of the time. The strange, pseudo-MOBA (pseudo because there’s no human opponent on the other side) gameplay gives you different tasks to accomplish in each level, but a lack of control over how you get them done. One tap can call the Einherjar to you, but otherwise they’ll rush straight ahead, not waiting for you to shatter breakable objects, defend your base, or anything else you might have in mind. The allies are a little better, staying nearby and not using their special abilities until you tap a button.

As for the guy Hulk calls Goldilocks, he’s not completely under your control either, thanks to some wonky controls. Melee attacks are easy since you just tap on your target, but throwing Mjolnir is wildly inaccurate – strange considering how long he’s been slinging the hammer. Because of that, some battles are easier to win by sitting back and allowing the Einherjar to wear the enemy down. And that’s not very god-like.

Thor can cut loose with some visually impressive lightning powers, which can be upgraded by using ISO-8, the supercharged element from the other Avengers mobile and social game. There’s also a regular currency called runes that can upgrade Thor’s hammer, Thor himself, and the Einherjar, and a premium currency called Uru (the mystic metal used to create Mjolnir) that can do things premium currency generally does. 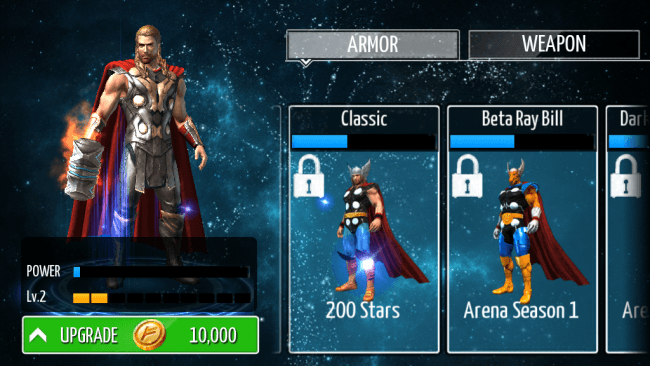 You’ll also find a nice selection of Thor costumes to unlock, generally by earning enough stars on the various levels or spending Uru. There are comic book and movie looks, and even honorary alien thunder god Beta Ray Bill. Sadly though, there’s no Thor, Frog of Thunder skin. Maybe in an update. Multiple hammers can also be unlocked, each with their own unique powers.

Will you stick with the rescue of the Nine Worlds long enough to collect them all? Only you can answer that, and it’s worth noting that Thor: The Dark World is free to download. It’s got the looks to be the game that Thor deserves; it just still doesn’t nail the feel. Maybe next time, Odinson.