Home / Reviews / This Could Hurt Review 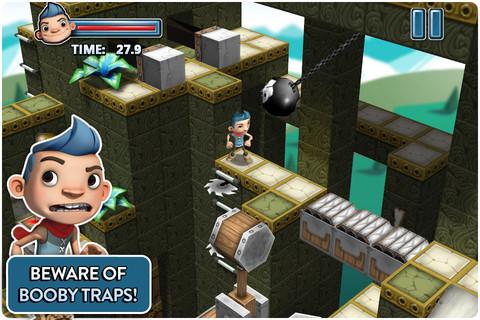 Ah, adolescence. A time of growing up and becoming a young adult. The start of romance, education, the spikes, the buzz saws, the . . . what? It seems that Great Oak Villiage does things a little bit differently than kids these days are used to. Want to become an Oakguard? You’re going to have to defy death and escape the Path of Pain. Good luck.

Let’s just say that the Path of Pain lives up to its name. It’s a disgusting mass of sharp objects, bludgeoning forces, bullets, and death drops. Your job as the player is to guide your incredibly brave Oakguard apprentice unscathed. Sound difficult? It is.

Controls are so simple that an infant could play. As your character walks through the isometric world across obstacles, holding a finger anywhere on the screen will stop him in his tracks. He’ll do all the dirty work, like climbing and jumping, but it’s up to you to keep him alive. By timing the motion of various oscillating dangers, you’ll stop and start your way to a non-violent ending.

Luckily, your hero doesn’t abide by the same rules as mortality as we do, and can take a few buzz saws to the face without collapsing. Each obstacle will take a chunk out of your health bar, but you can make it out of each obstacle course alive with a couple dings here or there.

For those perfectionists out there, each level can be completed upon a variety of factors. Completing a course quickly and without taking a hit will reward the player with extra acorns, which can be reinvested in the shop for powerups. Because using powerups help you get a better score in the first place, spending and gaining acorns becomes a simple and reliable process.

Even with powerups, however, most players will come to the same conclusion: This Could Hurt is a very challenging game. Good timing is required in order to make it through the Path of Pain alive, and the space of a few milliseconds could mean the difference between life or death.

Ironically, your greatest danger isn’t the fire, the mallets, or even the sea monsters. It’s falling. While you can afford to take a few blows here or there from obstacles, one wrong step over a ledge and you fall to your death. This can get particularly frustrating on some of the longer stages, forcing you to start all the way at the beginning in order to correct your mistakes over again. Most of the challenge is fair, but the occasional poor camera angle or surprise action can get a player feeling pretty sour. 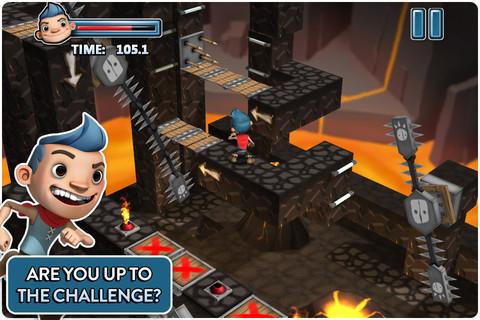 It’s this sometimes-blistering difficulty that will keep players playing, though, because This Could Hurt doesn’t offer a tremendous amount of depth on its own. There are four areas with 10 stages each,leaving for a pretty shallow pool of selection.

There are a few hidden areas to discover for players curious enough to try multiple paths, but the fun wears off after you’ve completed the final stages. You can try and perfect your past stages with hit-free speed runs, but plenty of players will wish they had more stages fairly quickly. As what seems to be the norm with iOS games these days, players will have to eagerly wait for a “more stages soon!” announcement.

This Could Hurt is pretty brief and pretty challenging, but it’s also pretty fun. The 3D isometric graphics are vibrant, and what’s more ridiculous than sending a child through a mechanized death course? Players who have a knack for games that require perfect timing will love this one, even if they find themselves finishing the entire game a little quickly.