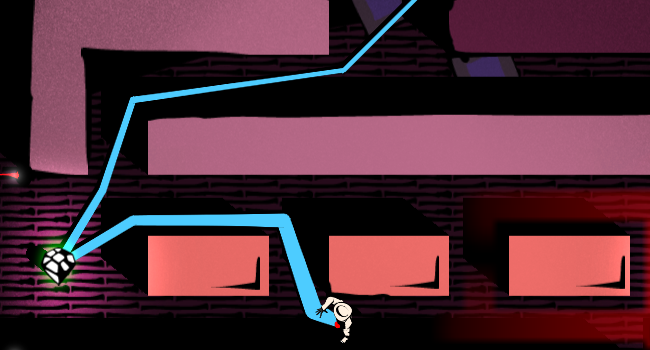 A game. There’s always a game. On this particular night, rain spattering against the window so hard you’d think the big man upstairs had a score to settle, it wasn’t just any old game, however. This one, she was something special; the kind of game that grips you in a thrall, turning minutes into hours. The kind of game you know might be trouble, but which coyly beckons you to follow it into the wee hours of the morning. The kind of game where you know better, but say “yes” anyway.

All cinematic asides aside, Third Eye Crime is definitely not your run-of-the-mill mobile title. The self-styled “game noir” offers a refreshing take on top-down stealth mechanics, all while bathed in a gorgeous graphic novel aesthetic and accompanied by a smoky jazz soundtrack that will have you, too, concocting monologues in your head. Be warned, though: sometimes you’ll be tearing your hair from atop it as well.

Third Eye Crime tells the story of infamous art thief Rothko, whose notoriety comes not just from his dastardly deeds, but from the way he manages to commit them: telepathically. You see, Rothko knows what everyone is thinking, making stodgy museum owners and dangerous guards unwitting allies, telling him where to find the most expensive goods, and giving away the best escape routes. In true 40s movie fashion, however, a secret that helpful proves far too hard to keep. Soon enough, Rothko finds himself mixed up with powerful politicians and shadowy figures, pulling jobs he swore he’d never take on. And then there’s that dame he can’t get a read on… 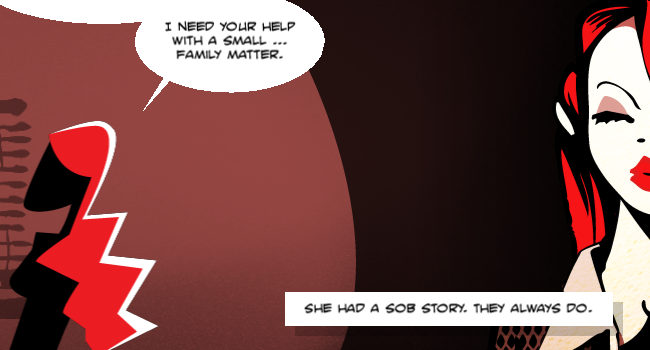 If it wasn’t already apparent, Third Eye Crime is a narrative treat. Developer Moonshot Games strikes a great balance between sending up film noir tropes and offering enough genuine intrigue to keep things interesting. By the time twists become apparent, the story has you invested and along for the ride – much to the credit of the stylized interactive comic book sequences that bookend each chapter. Far from a thinly veiled excuse to express the mechanics, Third Eye Crime‘s story had me hungering to see what came next, and smiling when I did.

In fact, it’s Moonshot’s commitment to telling a compelling story which makes the gameplay of Third Eye Crime feel all the cleverer. The game expresses Rothko’s telepathy in a deceptively simple way. Drag your finger to create a visible line along which Rothko will tiptoe (how else would a spy get around?), with blue areas representing the actual line of sight for each enemy, camera, and pesky protective device you encounter. Once spotted, however, red pathways flare out onto the stage, representing the areas where your pursuers believe you to be. Get spotted just as you round a corner into a maze of blockades, for example, and there’s a very good chance that you’ll be able to wind your way to safety while bamboozled guards slowly explore each corner and pathway.

At its best, Third Eye Crime fleshes out this ingenious concept in ways that truly make you feel like a master thief doing what he does best: sleuthing around corners just in time to avoid the gaze of clueless thugs, snagging diamonds and precious art from under their noses, and thumbing yours at those giving chase as you clear the exit door just in time. Supplementary goals like completing a level by drawing a single continuous line, making it out with all the glittering treasure, or  this stealth devotee’s favorite, never getting seen at all, often prove to be perfect guiding principles that help to build tension and create a cadence to each sneaky scenario.

However, execution across Third Eye Crime‘s 120 levels is not without its flaws. As difficulty spikes, occasionally imperfect hit boxing and sometimes misinterpreted touch input result in a frustrating gamut of retries. It becomes clear that the difference between feeling like a master art thief and a frantic escape artist lies in nailing those “perfection” objectives, which grows to feel more possible in theory than reality. Like a precarious house of cards, a level’s ideal execution often comes tumbling down for want of the slightest misstep; something which would be more excusable were those missteps purely of your own doing. And while it’s arguable that Third Eye Crime takes this into account by hiding its hardest chapters within purchasable acts, this forces more casual players to butt against frustration to experience the full story. 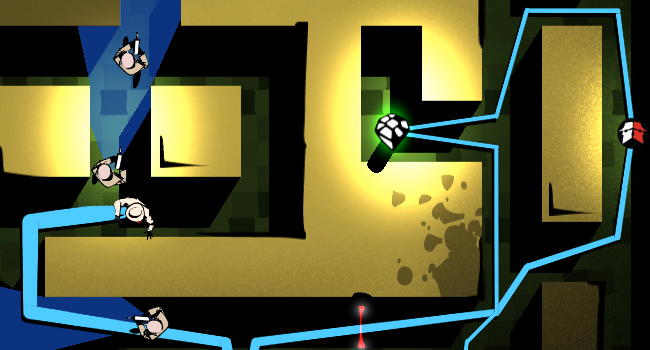 Moreover, the game’s different abilities are hit and miss, making their deep integration into each chapter sometimes disappointing. Excellently executed modifiers like the “guard costume” and phantom decoy (which you can send on its own path) are offset by clunky choices like the sight-blocking box, which frequently forced me to retry as it required precision placement. I found myself playing a swath of levels in a row which felt dragged down by the need to make use of a specific chapter item, and would sooner have seen Moonshot slim down the level count in favor of amplifying their better ideas.

Ultimately, though, there are enough of those great ideas – both artistically and mechanically – to ensure that Third Eye Crime stands out as a singular experience in its genre. Like one of Rothko’s capers, the game is not without its hitches, but Moonshot managed to handily steal my heart with their first mobile title nonetheless. Let’s hope the game’s final-chapter nod to a potential sequel bears out, giving the team a chance to refine and deliver more super-sleuthing.