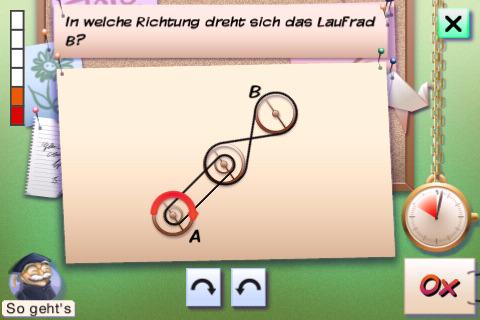 Brainteaser games are a great way to kill some time. They make you think, they tend to be fast-paced, and they’re really useful for staying awake during a dull day of classes or office meetings. THINK, a new brainteaser based on the popular series of PC games from Ravensburger, has made its way onto the iPhone – but it doesn’t exactly measure up to the better entries in the genre.

Like every other entry into the “brain training” field of games, THINK is actually a compilation of separate minigames that are designed to help train your cognitive processes. There are exercises involving mathematics, memory, color recognition, and creative code-breaking to name a few. Players can either engage in a daily test that covers a number of different puzzles or they can fire up individual minigames for moment-long rounds.

THINK‘s biggest problem is that several of the minigames just aren’t very interesting because they’re too easy. There are some great concepts, like a version of Sudoku that uses color blocks instead of numbers, but there are only a couple of squares to fill in (meaning it’s almost impossible to match a block incorrectly). On top of this, some of the games don’t seem to make any sense until you discover the basic tutorial explaining how to play them.

A prime example of confusing play is a minigame where a player has to remember how much wine is in a glass; after seeing a couple of glasses with different amounts in them, players are instructed to fill up the glasses. This sounds simple enough, but it’s not apparent that THINK means you have to fill the glass to the top, based on the amount of wine already present. One of the biggest assets games in this genre can take advantage of is intuitive gameplay, and that just isn’t present enough here.

It should be noted that I also encountered at least one problem where the basic math equation was impossible to solve with the given numbers and actions (something I confirmed with my brother, a mechanical engineer).

The slightly-cartoony graphics might have some appeal for kids, and younger gamers would almost certainly enjoy the option of getting to listen to their own music during gameplay. Unfortunately, the fact that you often feel frustrated or bored can’t be countered with some cute production values; so it’s tough to even recommend this title for younger gamers.

For the most part, everything about this games sits somewhere around the line of “passable, but not great.” There’s nothing here that’s really great or original, which is problematic since so many other brainteaser games have been utterly delightful.

There just isn’t anything remarkable about THINK, which is pretty much a death sentence these days in a market that’s flooded with quality titles. The graphics, the audio, the gameplay: nothing here stands out, and the gameplay leaves one frustrated more often than entertained.