Might just be the hardest game you ever play -- that's either a pro or a con depending on your opinion.

If the They Bleed Pixels experience can be summed up in a single word, that word would be “humbling.”  Despite my valiant efforts to the contrary, I wasn’t able to finish the whole game before writing this review.  In fact, I don’t even think I was able to finish half of it.  That’s not because it’s a big game, or because I’m a terribly inconsiderate writer – it’s simply because of this: They Bleed Pixels is a brutally difficult game.

An action platformer that will test even the hardest of hardcore, They Bleed Pixels tells the story of young girl who – in her dreams – grows a demonic pair of bladed weapons in place of her hands.  The whole experience is dripping with Lovecraftian goodness, so fans of arcane horror will find plenty to love here.  The enemies, the cut scenes, the music – everything echoes with that sense of dread and discord that fans of classic horror lit will love.

Sharp as the presentation might be, though, the real star of the show is how it plays.  Combat is simplified to a one button press, but using that button press in different ways can help you chain together epic combos with a variety of moves (jumping above an enemy and pressing down/attack at the same time, for example, will dish out some death from above, while holding the attack button will kick them in the air where you can jump up and unleash a frenzy of stab attacks).  The better the combo, the more a particular gauge will fill up – and this is plenty important, because filling this gauge is the only way you’ll establish a checkpoint.

Both the gameplay and level design are about as tight as you can get in a platformer, so when you fail (and you will fail alarmingly often), you’ll know it’s entirely your fault.  It’s not the game that’s broken – it’s you.  Maybe you’re just not man enough for They Bleed Pixels.  I know I certainly wasn’t.

What’s this?  Another paragraph about the difficulty?  I don’t mean to harp on this point, but seriously – They Bleed Pixels is the single hardest game I’ve ever played.  It’s like Spooky Squid Games went out of their way to create the antithesis to the “everybody wins!” mentality of most video games today.  Of course, if you do manage to perform well, you’re going to be amply rewarded.  Achievements, art – even bonus levels from other designers (including one inspired by Sissy’s Magical Ponycorn Adventure) – it’s all there to be unlocked. There’s an awful lot of carrot on a stick for those willing to tough through the games finger-blistering difficulty. 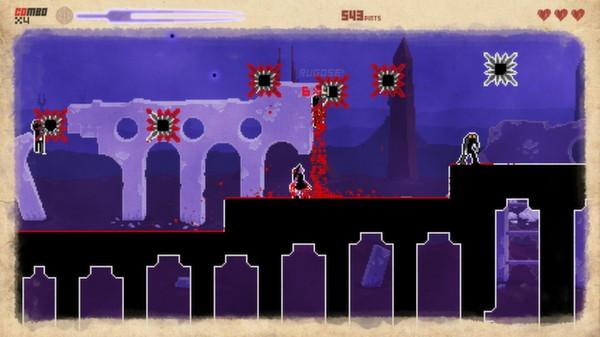 As the name suggests, though, the game is also pretty gory.  While the blood depicted in They Bleed Pixels may in fact be pixelated, there’s more than enough to fill a swimming pool every five minutes.  Those in the game’s target audience will no doubt revel in this fact, but if you’re a little squeamish, They Bleed Pixels might not be the game for you.

Despite my total lack of progress, They Bleed Pixels has taught me plenty.  First and foremost, it’s taught me that Spooky Squid knows how to make an amazing title.  The atmosphere, the tight controls, the endless reasons for replaying – They Bleed Pixels has it all.  It’s also taught me a little something about myself; that despite my years of experience playing them and subsequent career writing about them, I apparently stink at playing video games.

Maybe I should have been an accountant.