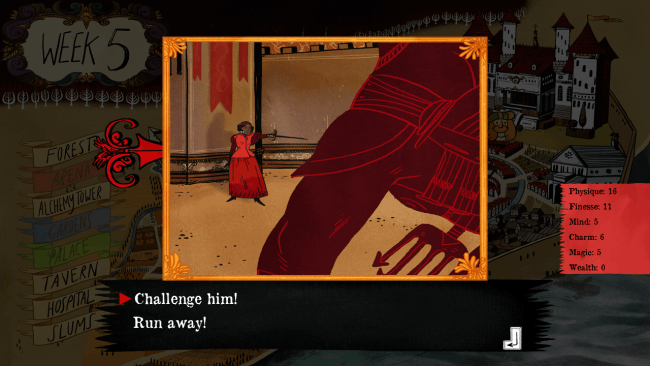 The Yawhg is coming… you’d better bring some friends.

We’re fans of the “Choose Your Own Adventure” style here at Gamezebo.  That’s why we’re always excited to hear about the latest release from Tin Man Games, and why Steve Jackson’s Sorcery! is one of our highest rated games of the year. But as much fun as those games might be, they don’t stray terribly far from the established formula. The Yawhg, on the other hand, breaks that formula into tiny little pieces, and then uses those pieces to build something wonderfully new.

At its core, good interactive fiction focuses on three things: player choice, great storytelling, and plenty of surprises. The Yawhg has all of these things, and yet I’d be hesitant to call it interactive fiction.  It’s not a gamebook, it’s not a visual novel, it’s not an old school text adventure – and yet its appeal should be instantly recognizable to fans of all of those things.

If I were to put a label on The Yawhg, the one I’d choose might surprise you. Underneath its literate presentation, The Yawhg is – above all else – a party game.

My inability to describe The Yawhg in expected terms seems somewhat fitting, considering the nature of the game itself. While I might be unable to describe the game The Yawhg, the text is equally unwilling to describe the similarly named event “the Yawhg.” The only thing players are told about the Yawhg is that it will be here in six weeks, and it will destroy everything in sight.

The characters in the story know even less. They go about their daily lives, completely oblivious to the impending doom. As the player you’ll guide a character through those six weeks, making decisions that will shape their abilities in a quiet attempt to ready them for the coming storm.

The multiplayer twist comes in the game’s refusal to let you pick a single character.  There are four characters in total, and you’ll need to choose at least two. The idea is that you’ll take turns with up to four players, passing around the keyboard or a controller (using a gamepad makes the pass’n’play nature of The Yawhg a snap) as you each take your six turns over before the arrival of the Yawhg.  Of course, you don’t have to play The Yawhg with friends – controlling 2-4 characters on your own is plenty of fun too – but The Yawhg really shines when everyone in the room thinks they’re your top advisor. 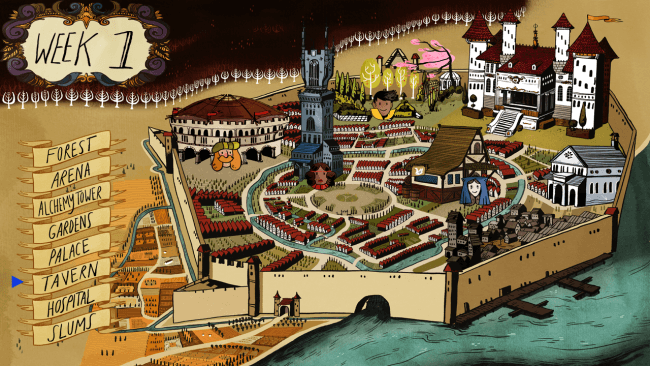 The choices you’ll make for your character shape some fairly common RPG-style stats (charm, magic, finesse, etc..) which in turn will give you a chance to succeed when taking a role in rebuilding your town once the Yawhg has gone.  If you have plenty of magic, you might want to be the town’s conjurer.  Plenty of physique? Why not try your hand at being the builder?

The Yawhg is coming – of that there is no doubt – but what kind of a person will you be after it leaves?

Choosing a role post-Yawhg is the penultimate choice, but the game is really played in all of the choices that come before it.  You’ll choose different locations for your character to visit (hospital, slums, tavern, etc..), choose from different activities at each location, and make decisions stemming from random occurrences at each location. This is the very heart of The Yawhg.

The variety of results may surprise you, as well.  And while the same text will inevitably pop up on multiple play throughs, different choices can open up new situations.  After about a dozen plays, one wrong move in the slums and BAM! – I was a vampire.  Someone in the gardens hooked me up with some magic beans, and the next thing I know… Ok, I’ll stop with the spoilers.  The point is, The Yawhg manages to delight with every surprise it throws at you. 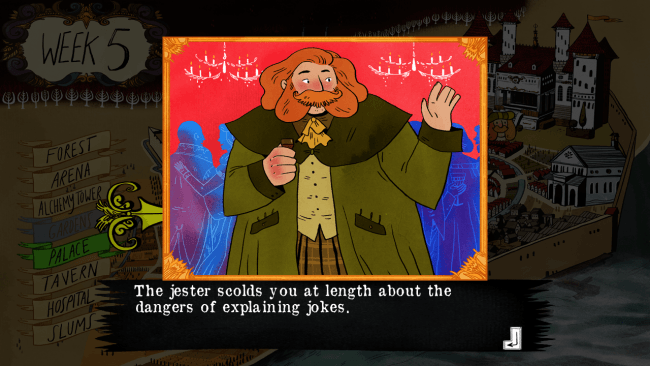 The gameplay and storytelling are top notch, and we’re pleased to say that the presentation matches it beat for beat.  This is the kind of game that makes you want to buy an art book and soundtrack from the moment you boot it up. We often talk about games with great “art,” but what you’ll see in The Yawhg really lives up to that three letter word.

There are plenty of party games on the market. Storytelling games, too. But a storytelling party game? That’s a rare bird if ever I saw one. Yet despite its niche place in the pantheon of party games, The Yawhg manages to be one of the freshest experiences I’ve played in years – multiplayer or otherwise. For the villagers, the Yawhg is coming in six weeks. But for players? The Yawhg is here now.

Hope: The Other Side of Adventure Review