Home / Reviews / The World Ends with You: Solo Remix Review 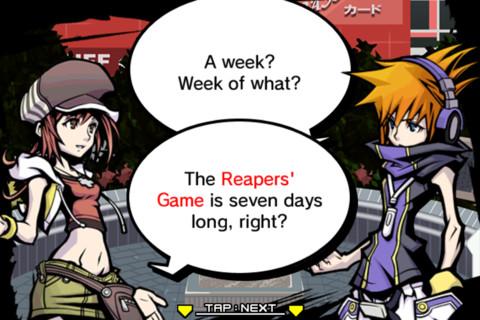 A videogame port that surpasses the original? The world may just be ending.

A week ago, I reported on the speculation that Square Enix’s cult classic RPG The World Ends With You would be making the jump from Nintendo DS to iOS. As it turns out, speculation was right! So for most of the days that followed, I’ve been lost in dystopian Shibuya, Japan, determined to see if this version – dubbed Solo Remix – would be as strong an offering as the original. As it turns out, it isn’t: it’s much stronger.

For those who missed out on the original’s shamefully small release, The World Ends With You is an RPG of a different breed, inspired in part by Japan’s hyper-metropolitan Shibuya shopping district, and in equal measure by modern technological parables like The Matrix. The game puts you in control of anti-social teenager Neku Sakuraba, who would rather zone out to music than listen to another human voice. Waking up in Shibuya with no knowledge of how he got there – or in fact what the district is – Neku quickly realizes he’s inside an improbable, very deadly digital nightmare; playing a “game” organized by a mysterious group of super powerful beings known as Reapers.

The mission? Survive for seven days against hordes of static-turned-monsters known as Noise. This sets the stage for three major arcs in which you get to know the other doomed travellers accompanying you as game “players,” and slowly discover how their fate intertwines with that of Neku’s forgotten self. On one hand, the game falls prey to all the overwraught character melodrama and clunkily written dialogue that have come to define the Japanese RPG, which many very well turn off non-fans of the genre. On the other, however, the narrative payoff here more than makes up for the time-worn tropes.

Solo Remix is about the long game, and every puzzle piece that falls into place brings new light to who each character is, and why they act the way they do. And as links are established between Neku’s “game” and his real world, players are ultimately presented with a dark, introspective storyline that tackles the perils of growing up, fitting in, and making sense of  the world and your image within it.

To that end, Square should be commended for the image of the game itself. Mirroring Solo Remix’s theme of identity, the entire aesthetic is a self-aware nod to the trendy cutting edge – and the feeling that you always have to be there. Every character is a too-skinny, fashion forward Japanese teen steeped in Shibuya street culture. Gone are the hills, mountains, and forests of the typical JRPG, replaced instead by metropolitan Japan of the future.

Power-ups come from graffitied pins that you level up, and stat. bonuses are the result of purchasing maid bonnets and logo-laden shirts. During battle, the “noise” appear as animal-flashy-car hybrids: kangaroos, bats, bears, and frogs painted in vibrant neons and decked out with flames and tribal tattoos. The game quickly emerges as more of a commentary on, and subversion of the genre’s foibles than a title giving in to them. Here we see the first stark improvement over the DS version as well, as Solo Remix’s HD veneer brings the flashing, beeping Shibuya to life, and cleans up both its diverse population and the menus used to navigate your adventure.

And ultimately, it’s the adventure that took this game from obscure RPG to “that game all your DS-toting friends bugged you to play.” Packed with refreshing variety, The World Ends With You had players doing something vastly different on each day of the Reapers’ game. Whether it was hunting down a band technician and manipulating his thoughts to help him return the lights to a concert hall, or polishing – and then fighting! – the possessed statue of a lucky dog, the game shone in its ability to make RPG questing feel like microcosmic point-and-click adventure titles. Meanwhile, the whole thing was tied together with a stable of truly innovative mechanics like mind-reading, thought implantation, and most crucially, one bafflingly cool battle system.

I’m happy to report that Solo Remix has kept all of that intact, shot for shot, and gone one step further to truly improve on the game’s chaotic combat. In The World Ends With You, the Nintendo DS served as the inspiration for a two-screen fighting scheme, in which Neku’s partner would be controlled with the system’s d-pad to execute melee attacks, while Neku himself would unleash the powers locked inside his pins – massive ice spikes, fire, lightning, and more – using the stylus. The whole thing happened simultaneously, and exciting bonuses and crucial combos were awarded for the ability to alternate, or “sync,” the two characters seamlessly. 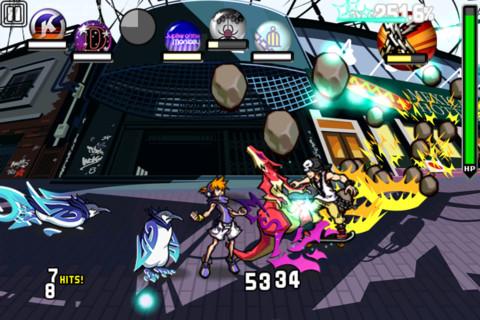 As spectacularly off-the-beaten-path as the system was, however, it ultimately felt like rubbing your stomach and patting your head at the same time…while delivering a speech from memory. Hardcore players of the game will insist ’till they are blue in the face that it was a rewarding system to master, but I’d argue that it was rewarding in the same way beating Ocarina of Time‘s original Water Temple was rewarding: masochistically. The truth of the original system for me was that its ambitions outreached its design realism, offering a slight imbalance of frustration to fun, preventing the title from feeling as seamlessly playable as it ought to have been.

In Solo Remix, the lack of a second screen has been circumvented brilliantly, with Neku’s partner functioning as another pin, activated by tapping “off-beat” on the stage’s enemies. Execute one of Neku’s pin attacks, then tap the same enemy, and Neku’s ally swoops in for a hit, cooling down to recharge after a certain amount of uses. The result is combat that still feels chaotic, but far more manageably so, giving you the feeling of expertise far quicker, and allowing you to use the time you would have been struggling to master a variety of pins, and suss out a play style that’s most fun for you. This is RPG combat that feels truly action-packed by virtue of performing actual actions. I haven’t been more satisfied during an RPG battle than I have in Solo Remix when deftly flowing from one pin to the other until enough “sync” is attained to unleash a massive, all-encompassing “fusion” attack.

Truly, though, that’s underselling it. I haven’t been as satisfied in general with an RPG as I have while playing Solo Remix. It’s everything great about The World Ends With You wrapped in a package that takes a real look at the title’s past, and strives to make it more accessible to a larger group of people. In that way, it’s a port that takes seriously its mission to add value instead of rehash nostalgia. 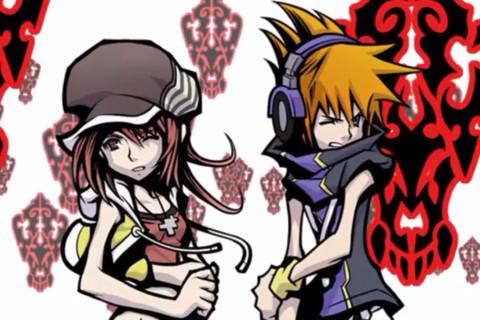 Square deserves the criticism it’s been receiving for separating the title into two different SKUs instead of offering up a universal version, but it says enough that this game will have you nursing the device you download it on until you’ve finished. I can’t even rightly list its $18.00 price tag as a negative, since this is a game I’ve more than once considered hunting down and paying $40.00 for all over again. Full of variety, truly innovative, and uncompromisingly willing to mix things up, The World Ends With You: Solo Remix is a game every iOS RPG fan should have, and one every fan of the series should have all over again.