The Wonderful Wizard of Oz Review 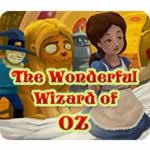 Injoy Games’ colorful puzzler will be familiar to the millions who’ve spent time with Bejeweled or other 3-in-a-row games, but folds in the classic Wizard of Oz story. This marriage works, but fans of the book or film may want a deeper Oz experience than what you’ll get in the game.

In case you’ve never played one of these gem-swapping games before, the player is presented with a 2-D board, which offers a new layout shape per level, and is decorated with colored gems such as red rubies, blue diamonds and green emeralds. The goal is to create a vertical or horizontal line of at least three same-colored gems in order for them to disappear, which makes more room for more jewels to cascade down onto the screen. This is achieved by swapping adjacent gems using your mouse.

In The Wonderful Wizard of Oz, you must not only free trapped munchkins stuck inside these pieces (they fall to the ground, yell with glee, then run off-screen!) but in order to finish the level you must also destroy the bricks behind many or all of the of the jewels. Unlike most other 3-in-a-row games, this one has a Diagonal Meter that fills up by freeing munchkins; when it’s full, you can diagonally swap a gem with its neighbor in order to create a row or column of at least three gems (so, you’re not creating a diagonal line).

Besides trapped munchkins and diagonal swapping, another distinction is the many power-ups you can use which are somewhat tied to the events or characters in the story. A tornado gem, for example, will whirl away all other gems in that column, while a lion gem roars away all surrounding gems. Other power-ups include locks and keys, fireballs that destroy the entire row and pickaxes used to chop away the bricks.

As added incentive to keep playing, gamers will be treated to a new excerpt of the story between levels. For example, the text at the beginning of Chapter 4 will be presented as such:

All this time Dorothy and her companions had been walking through the thick woods. The road was still paved with yellow brick, but these were much covered by dried branches and dead leaves from the trees, and the walking was not at all good. Just as he spoke there came from the forest a terrible roar, and the next moment a great Lion bounded into the road. With one blow of his paw he sent the Scarecrow spinning over and over to the edge of the road, and then he struck at the Tin Woodman with his sharp claws.

The levels themselves feature a backdrop with hand-drawn artwork tied to the levels, but it would’ve been nice to see Dorothy and Toto (not just her friends) and even unlock images, video or music from the film. Perhaps the developers only secured the rights to the book and not the movie. The orchestral music, however, is wonderfully written and performed, and it changes after each chapter.

The Wonderful World of Oz is a fun spin on the tried-and-true 3-in-a-row puzzlers, especially for those who enjoy this magical story of Dorothy trying to find her way home. It’s a colorful and addictive time-waster that players will enjoy clicking through – even if the core game-play doesn’t really offer anything we haven’t seen in past games of this kind.