Home / Reviews / The Wonderful End of the World Review

The Wonderful End of the World Review 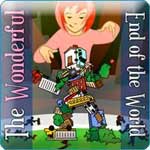 You may not have heard of Dejobaan Games, but you probably should have. After all, according to them, they’ve been “making quality video games for 75 years.” If you can see the inherent problem with that statement, then the kind of tongue-in-cheek humor in The Wonderful End of the World is for you.

Reminiscent of the cult classic Katamari Damacy for the PlayStation 2, The Wonderful End of the World gives you one task: grab everything. Essentially, the world is ending, and it’s up to you to take as much stuff as possible before it does. You play a walking light creature that absorbs whatever it touches, from a gummi bear to a flower to a book to a TV to an orangutan to a car to a house to a… If it isn’t either the ground or border of the level, it’s fair game to get picked up. You start out absorbing small items and, as you grow, can gradually begin to absorb bigger things.

The entire game is bursting with creativity. The first thing you’ll notice is the high-quality soundtrack, an eclectic mix of rock, jazz, sound effects or whatever the heck Dejobaan felt like putting in there. The 3D graphics, while not the most detailed out there, have their own distinct style. Everything has a little slant to it, even the options screen (“Would you like to hear music during a level? Sure!/Nope.”). Then there are the three-eyed smiley faces that appear when transitioning from screen to screen. Yes, it’s all completely peripheral, but these little touches give the game its sparkle.

Players are introduced to the goals of The Wonderful End of the World through a silly 30s-style black and white short film. After that, you’re on your own. Each of the game’s 12 levels has three gameplay modes: Timed, Timeless and Exploration. Initially, you’ll only be able to play Timed, and unlock the other two after playing most of the game.

Starting with 150 seconds on the timer, snag as much stuff as you can. Controlling your character does take some getting used to. You can use either a first-person shooter type control scheme with the "W,A,S,D" or arrow keys (to move forward, back, left or right) along with the mouse (to turn the camera), or use a joypad. (Unfortunately, I couldn’t get the joypad option to work properly.) After time runs out, you’re graded on how much stuff you were able to pick up. Getting better grades unlocks other levels to play.

The levels are all interesting environments, but some stand out more than others. My two personal favorites were Arcadia and Word Forge. Arcadia (playable in the demo) starts you out in a small dark space that looks like it came out of the 80s movie Tron. After absorbing some little white squares until you’re able to bust through the wall and into the next area, a giant maze, realizing that you’re suddenly absorbing Pac-Man. Eventually, you get so large that you begin to absorb the maze itself. Around you is a colorful world featuring large mushrooms (hints of Super Mario Bros.) a centipede (from Centipede) and even some space invaders come dropping in (from… err, Space Invaders).

Word Forge has nothing but letters and word blocks of various lengths and sizes. At first, you can only pick up one letter at a time, then three-letter words, and then five-letter words. You continue to graduate to longer words made of larger letters. But it’s just as fun to read the messages that the words make up the level. From classics like “there is no place like home” to a bouncing set of “bouncing!” it’s my favorite level to just explore.

The game does give you the chance to play without the pressure of a timer. In Timeless Mode, you can take as much time as you like to absorb everything in a level. The game will simply tell you how long you took to do it. Exploration Mode turns the timer off completely. If you feel like staring at an orangutan in a level, you’re welcome to do so. The game’s dozen or so trophies give you little achievements, like picking up a certain object in a level, or getting a certain number of points.

While the game is highly playable for me, I can see a few problems arising for many players who have not played many 3D games. If you think you are prone to motion sickness, be careful when playing this game. As mentioned previously, the controls can be a bit unwieldy, especially with the camera swinging constantly. Also, using the keyboard and mouse in tandem might take a while for people to get the hang of if they’re used to controlling games only with the mouse. I also encountered a few bugs: walking through some surfaces, falling into infinite space and one crash.

But, sadly, the worst crime of The Wonderful End of the Word is that there isn’t enough of it. The game finishes before it gets stale, to be sure, but it’s way too short. With only 12 levels, the other gameplay modes aren’t really enough to keep you coming back for more.

The Wonderful End of the World, if anything else, shows the gaming world to not always take itself so darn seriously. There’s a lot of creativity here, and it’s a game made by people who really love what they’re doing. It is saddening that the game is hindered by length, control and quality issues. One thing, though: I am now a fan of Dejobaan Games, and look forward to their future releases with earnest.