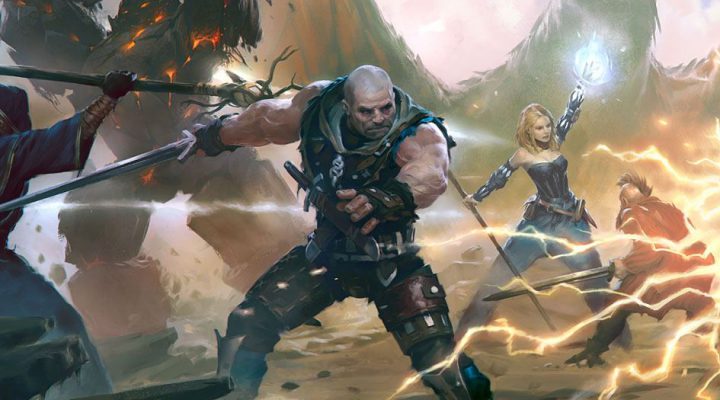 Everything in the game can be earned simply by playing a lot.

Very simple for a MOBA, probably too much for genre vets.

Only two small maps and nine characters for now.

I had a dream that The Witcher 3 was on tablets. It was a glorious dream, and an impossible one. Or rather, mostly impossible, because there is The Witcher Battle Arena, unleashed by CD Projekt RED for both iOS and Android tablets. Instead of doing the action RPG thing, it’s another entry into the ever-expanding field of mobile MOBAs, though it embraces the first part of that term more strongly than the second.

That’s not necessarily a bad thing, just a heads up that this is a game that’s more similar to Solstice Arena than it is Vainglory. The developers make no bones about the fact that it’s designed for mobile, not just in terms of controls, but also in generally streamlining the way it looks and plays. Thus, everything is smaller and simpler than you might first expect. 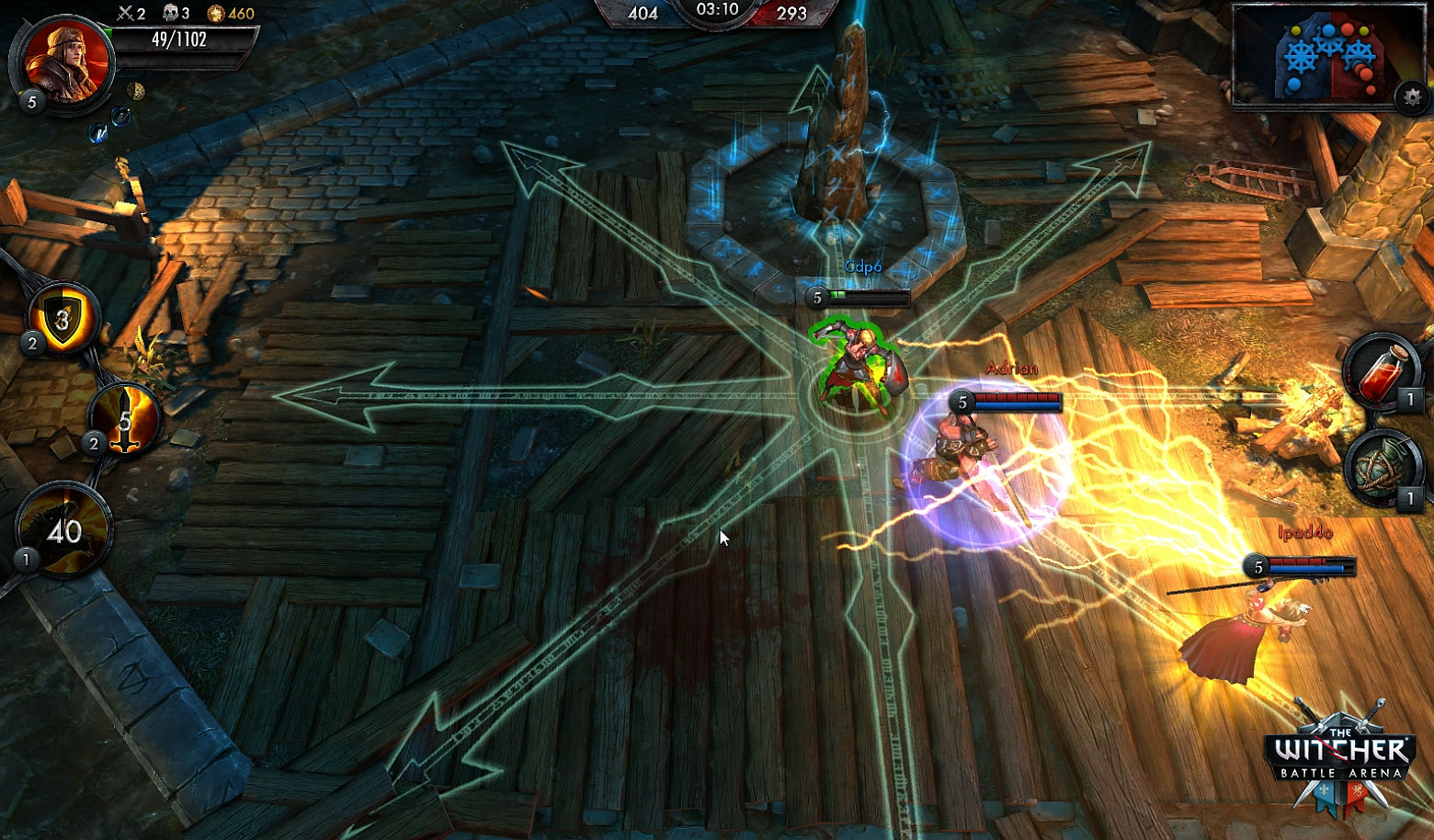 There are no lanes or minions on the two maps playable at launch. It’s strictly 3v3 battles, with control of three different points on the maps at stake. It’s pretty easy to understand what you’re supposed to do, even without really being able to communicate with your teammates outside of some visual tells, but there’s also a whole layer of strategy less than what you’ll find in your average MOBA on PC. A match takes about 10 minutes to finish if it’s exceptionally competitive, and less than that if it isn’t.

The nine characters are split into three classes — Warriors, Mages and Archers — giving you some idea of what their roles might be right off the bat. The control scheme for all of them is straightforward, as you simply tap to move and tap an enemy to start executing basic attacks. Skills have icons on the left side of the screen, some of which require a single tap to activate, with others requiring additional actions for targeting purposes. CDPR even allows some skills, like Eithne’s Path of Thorns, to be drawn onto the screen with your finger, which is pretty slick.

Along with the usual in-game leveling of skills, you can purchase equipment when you are respawning or back at your team’s base. This might be the only area where The Witcher Battle Arena is less than ideal for novices to the MOBA genre, because there’s no recommended purchase path or advice given. And since the battles are so short, there isn’t really time to stand around and do comparison shopping.

You’ll also earn gear you can use to equip on any of your heroes; there’s the typical rotation of free heroes, and characters can be purchased permanently using the in-game currency or simply bought outright for real money. For people who like their cosmetic items (and let’s face it, that’s the majority of gamers), there are plenty of character and weapon skins. The developers did a nice job living up to their promise that there’s nothing in the game can’t be earned simply be playing a bunch of matches. 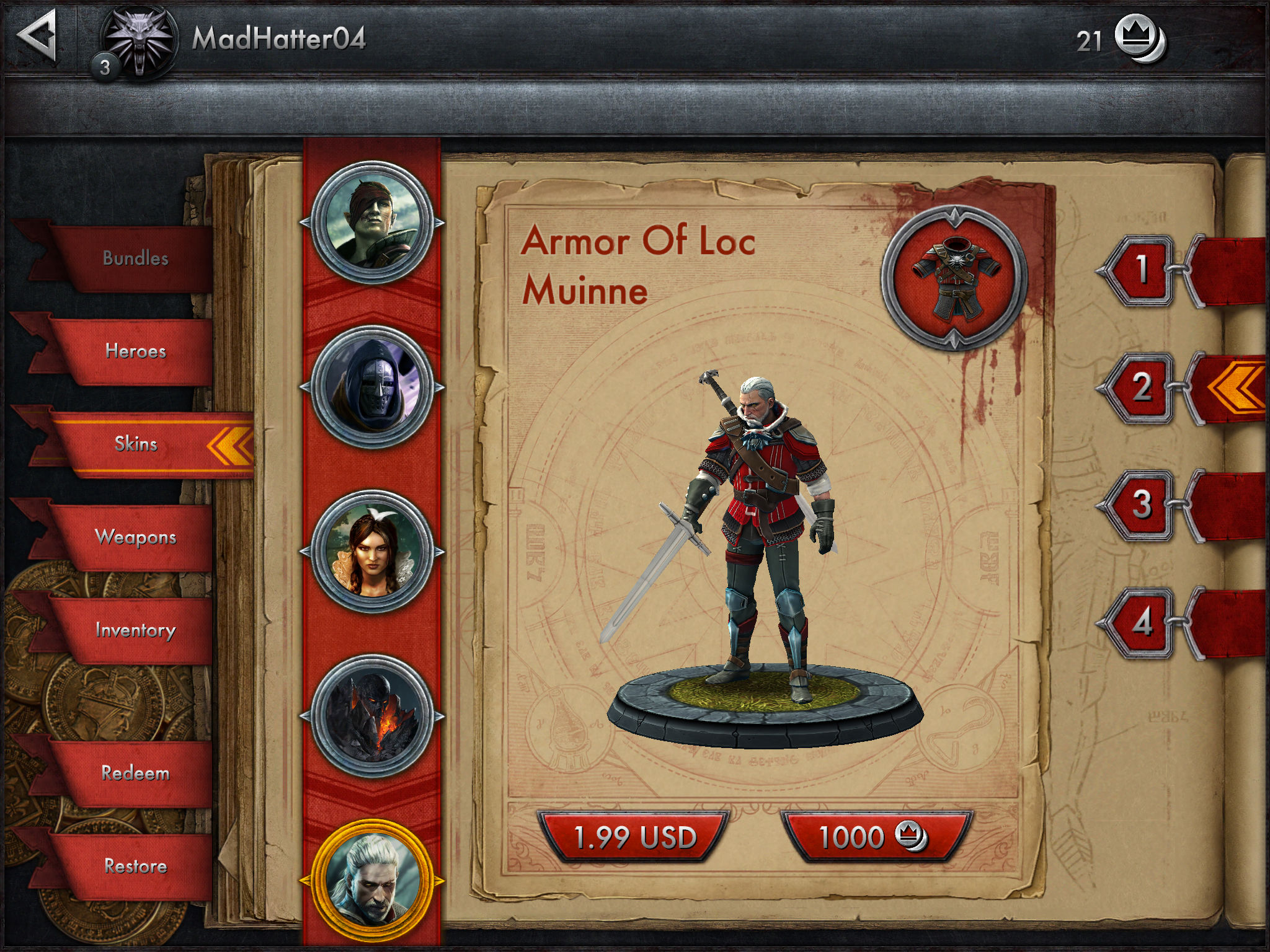 Some online complaints (BREAKING!) have surfaced about the graphics, possibly because The Witcher PC games tend to be visual feasts. To be frank, I’m not really sure what the fuss is about, as the character models look great when you get up close with them between battles, and I tend not to notice how nice the scenery is when I’m frantically trying to avoid letting my team down in any MOBA. Maybe that’s just me.

Really, the only real issue I can see with The Witcher Battle Arena, aside from some stability issues that will no doubt get ironed out before long, is that it feels like a side gig that CD Projekt Red whipped up while most of its team was polishing the next big PC game, and it probably was. That’s fine, of course, but when you stack it side by side with the games to which it will inevitably be compared, it comes up a bit short. It feels like it needs more characters — and more are coming — more maps or game modes, or just something additional to hold players’ attention in the long run.

Then again, it is pretty cool to hav control of Geralt of Rivia without all the complexities of the main series and just let him loose on his enemies. Maybe I’m underestimating the draw of The Witcher brand. If that’s the case, this scaled-down PvP experience could end up a nice way to extend its reach on mobile.