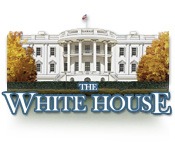 No surprises are in store in The White House, a thoroughly middling hidden object game set in the nation’s capital. Its few minor innovations are overshadowed by a substandard visual design that features poorly rendered objects which are often badly hidden in muddy, dull environments.

But I’m getting ahead of myself.

Players take on the role of college student Miranda Hunt (get it?), longtime friend of a professor who has gone missing while exploring and researching artifacts scattered about the White House. The FBI recruits Miranda to help find him, giving her access to freely move about the President’s home.

Through notes left behind by the professor it quickly becomes apparent that the Freemasons, an ancient society composed of powerful men (including many past presidents) has something to do with his disappearance. Miranda soon finds herself looking for hidden symbols, lock boxes, and other items marked with Masonic symbols in hopes of unraveling the mystery.

The narrative is pretty standard for a HOG, though the stilted voice work sounds rather like the developers recruited friends and family rather than professional actors.

There are, however, some surprisingly interesting little "fun facts" attached to many of the objects we find. Did you know that Theodore Roosevelt was the only president to kill a cougar with a knife? That Rutherford B. Hayes was the first president to use a telephone, and that it was installed by none other than Alexander Graham Bell himself? Or that Gerald Ford once hit a lady in the head with a golf ball? These and many other fascinating trivia tidbits pop up regularly throughout the game.

I also liked the idea of exploring the White House. Plenty of famed locations have made it into the game, including the Blue Room, the Grand Staircase, and the Lincoln Room. What’s more, we’re provided two angles of most rooms, and we can switch back and forth between them freely while collecting items. It provides a better sense that we’re actually on location and not just looking at a still image.

But that’s where my praise ends.

The White House stumbles in several ways, most prominently in the design of the objects for which we search. The best HOGs have us hunt for items that are the proper shape, size, and color, cleverly hiding them in plain sight in the places they ought to be; like paper on a desk obscured by books, or a treasure chest in a crowded fish tank.

The White House employs far blunter-and sometimes downright unfair-tactics. And I’m not just referring to the fact that this version of 1600 Pennsylvania Avenue is messier than Oscar Madison’s bedroom and filled with objects that have no right being there. (A fire hydrant on the floor in front in front of the Grand Staircase? Really?)

I’m talking about objects that are simply unrealistic. Like a shaving brush the size of a houseplant sitting on a mantle. Or a clay carving tool twice as big as a baseball bat leaning against a fireplace. Or a huge, transparent can opener filling a doorway.

At least those objects are easy to find by virtue of their enormity. Not so for others, such as an only slightly oversized and mottled looking golden key somehow affixed to the neck of an equally mottled candelabra, or a watch that turns out to be little more than a featureless circular pattern on the busy fabric of a chair.

That these latter objects were difficult to find is a symptom of another problem; muddy backgrounds. The rooms we explore lack the color, clarity, and definition required for players to clearly make out many objects. Everything just blends together, especially smaller items.

And the game’s little monotony breakers-like, say, using an object like a crowbar to ply something open, or lining up a camera viewfinder to match a picture taken by the professor-are quick and far too simple to be very compelling.

It’s worth noting that ample hints (earned by finding hidden All-Seeing-Eye markings) and the option of viewing an object’s silhouetted shape help ensure that the player is never stuck for very long, even when confronted by the most wickedly un-findable objects. And a Masonic lock box mini-game that has us swiveling electrical conduits to create a path for a current, though crude, is mildly diverting.

Still, with so many HOGs on the market these days developers must pay attention to the little things if they hope to earn critical accolades. There’s just too much lazy design in The White House for me to offer an enthusiastic thumbs up.