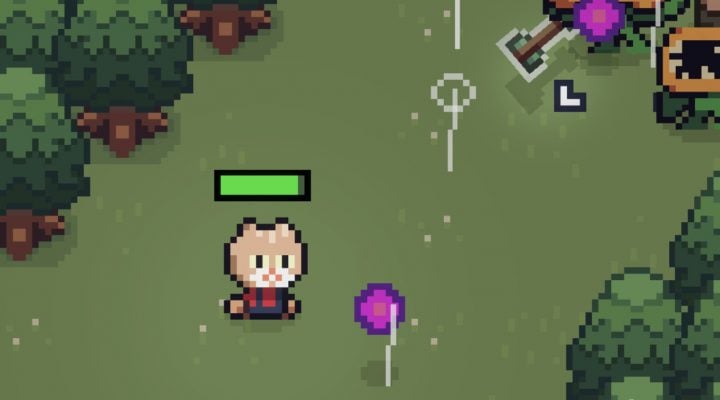 Can get a bit repetitive

Don’t let the charming, pixel art graphics fool you, there’s a decent depth to The Way Home – Cat Adventure. It’s a sharp distillation of roguelite and survival ideas, and while it might not have the heft of some of the games it borrows ideas from, it’s still good enough to get lost in.

The game sees you playing a cat stranded on a mysterious island. There’s a cave, and there are books you keep finding that keep telling you new things to do. Enter the cave and you get to fight and collect resources, using what you collect to build new contraptions on your island home.

The cave sections are made up of short levels. You need to kill everything on a level to open up the entrance to the next, as well as opening up a portal that lets you travel back home. Do your push you luck in the next section and risk losing two thirds of what you’ve collected, or head back to safety and store your stash?

The controls are simple. You move around with a floating joystick and you’ll fire your bow when you get close enough to an enemy. When there are resources to collect nearby, you can tap the screen to hack away at them with your pickaxe.

As you fight you’ll level up, earning new powers to aid you in your battles. There’s gear, too, dropped by downed enemies or found in barrels and chests. The powers you equip and the gear you strap on is lost when you head back to the island.

There are secrets to uncover, storylines to follow, and new equipment to build from the resources you lug back home. There’s always something to do, but the game is never mechanically overwhelming. When you die you simply walk back into the cave to start another run.

The Way Home – Cat Adventure dilutes plenty of concepts into its intriguing brew, and while some of them lose their flavor, there’s a compulsion to the game that’s reminiscent of the best dungeon crawlers. It isn’t perfect, but it is a lot of fun.