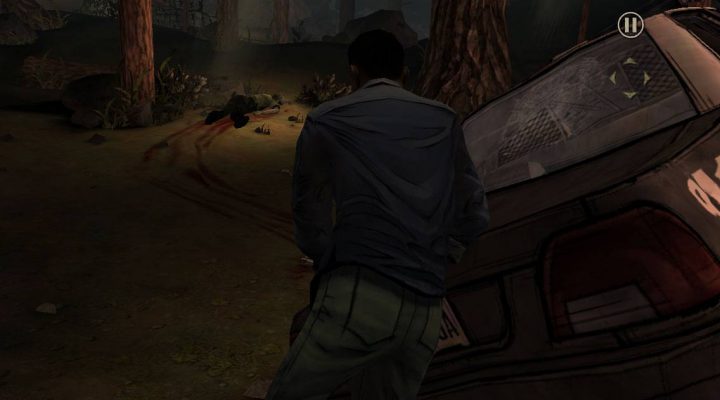 It's fun to see things running parallel to the main series' story.

Now, with The Walking Dead: Road to Survival, we get to control some of the iconic Walking Dead characters in a turn-based RPG that gives fans a taste of what went on off-camera in both comic books and the popular AMC television series.

The Walking Dead: Road to Survival begins right as Phillip Blake reaches Woodbury, prior to his infamous rise as Woodbury’s Governor. The game focuses on the comic series over the AMC series, so don’t expect to see Daryl mopping around or Rick to be well-armed. Fans of the show exclusively may find the differences a little jarring at first, but as someone who’s only read a few of the books, I was able to slip right into the game with no problems at all. 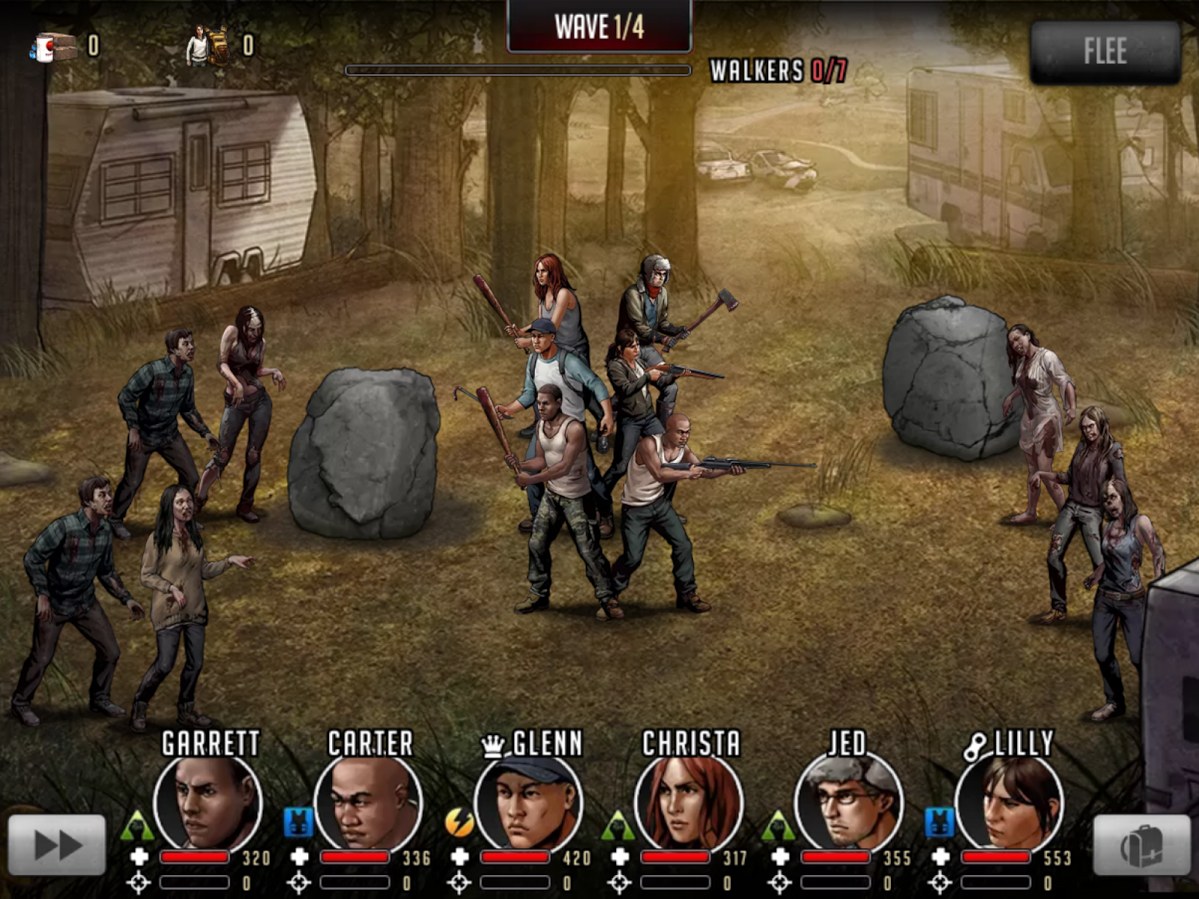 Turn-based combat in the game is really easy to get a grasp on. At the start of every turn, each one of your characters can attack a target once. Then, if you’re fighting zombies, the zombies take one step closer to your group. If you’re fighting humans, each will attack one of your characters and then it’s back to you. Certain character types do more damage to others, so it’s always best to assess the situation before you just start blindly hacking and shooting.

Fighting as a small, ragged group of survivors may not seem as glorious as heading into battle with a battalion of knights and archers, but being able to beat the odds and come out alive against multiple waves of zombies is extremely satisfying — and that’s ultimately what drove me to keep playing.

The coolest thing about The Walking Dead: Road to Survival is that it gives you a progressive story that runs parallel to the main events in the books. As I played through the single-player campaign, I ran into characters that relayed news from Woodbury, and I found myself nodding as I understood where things now stood in the timeline of The Walking Dead series. To add to that, the campaign allows players to make some big decisions along the way, so the experience I had while playing may be different to your experience. I feel like that was a nice touch, and something you don’t see too often in these sorts of mobile strategy games.

What I mean by “these sorts” is that, outside of combat, The Walking Dead: Road to Survival is a fairly standard base-building game. It features all the usual trappings of the sit-and-wait titles that have become the norm for mobile devices: wait timers, “borrowed” fighters from social activities, rigid building placement options, and randomized unlockables. 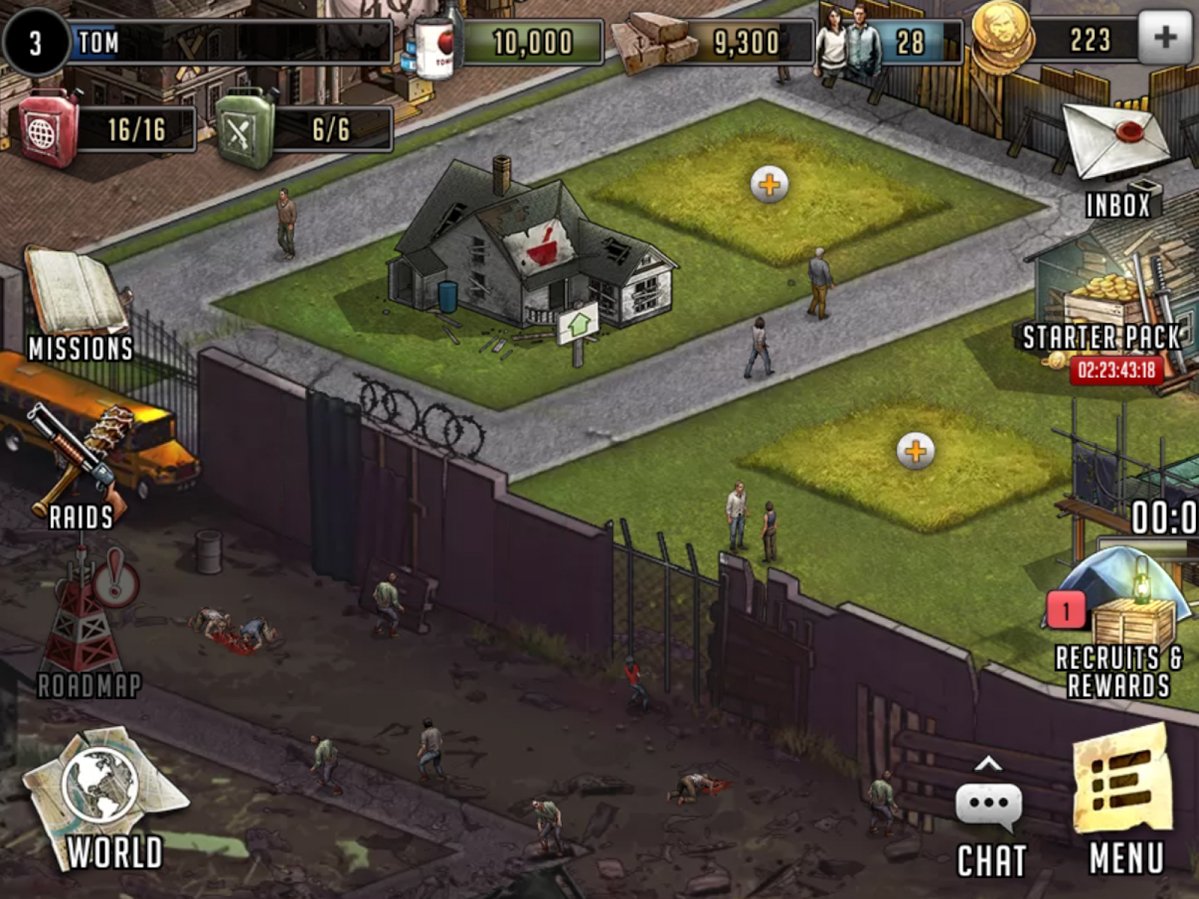 Multiplayer takes the form of raids. With raids you battle other players over reputation; winning builds up your reputation and losing diminishes it. Winning also nets players a good amount of resources that they can put into buffing up their fighters or upgrading their town’s buildings.

Overall, while The Walking Dead: Road to Survival is centered on the usual mode of delivery for mobile strategy games, the campaign gave me an engaging enough story and the combat was rewarding enough to where I feel comfortable saying that Road to Survival is a strong step in the right direction for the genre.