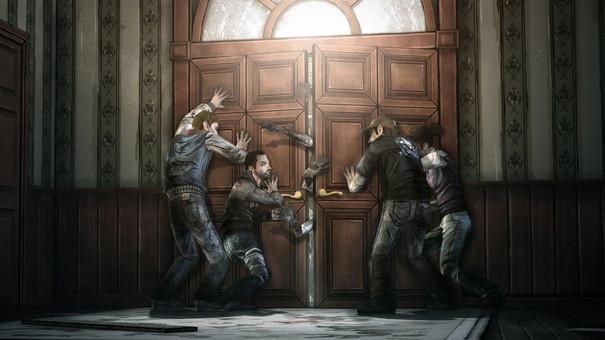 A serious contender for Game of the Year

I have been along for the ride of The Walking Dead since Episode 1: A New Day. I liked it, but I didn’t love it.  It showed promise. By the end of Episode 2: Starved For Help, I was completely on board. It was at the end of Episode 3: Long Road Ahead where I first uttered the phrase “potential game of the year.” The penultimate Episode 4: Around Every Corner wasn’t as high a watermark, but it set up a compelling and harrowing finale. Does the newest and final episode of the season, No Time Left, possibly payoff?

Yes. Yes it does.

In my many years of playing games, I’ve said that a game has had a great story hundreds of times. But those claims almost always came with an unspoken qualifier. “It’s a great story… for a video game.” Those of us that have been there from the beginning of gaming have been pining for a time where we can drop the second part of that statement. Where we can say something has a fantastic story, and it just happens to be a game.

The Walking Dead, as a season, has been so completely and utterly engrossing through each episode that we may have finally reached that point. We were shown quite early on that the writers weren’t going to shy away from the tough nature of the world post-zombie, where “good and decent” living quickly give way to just trying to stay alive. Moral ambiguity and grey area’s aren’t much tackled in games, and when they are it’s often clumsy.

It was during episodes 2 and 3 where the clear morality of what you were doing began to shift, away from ‘what was right’ to what needed to be done in that instant to keep going. It was a subtle shift, maybe even imperceptible as it was happening, only becoming apparent when reflecting on what you did afterwards. I tried to play the nice guy and keep everyone happy at the start, but as the pressure and stress of keeping the group alive and together grew over the episodes, it got harder and harder, until the end of Episode 4 where I finally snapped.

I initially thought my choice totally incorrect and considered reloading and changing my action. In my mind it was a totally out of character gut reaction that sent a schism though the group; one we weren’t coming back from. But was it sudden? What is really out of character at that point? Main protagonist Lee is tired, weathered, and beaten down. He only cares about keeping his young ward Clementine alive and safe. His worldview in narrow at this point. I ultimately decided my rash outburst would stand, Lee had had enough… and so did I.

And this is a video game we’re talking about here; that’s the exceptional part. This was my thought process while playing through it. I felt the pain and frustration of these characters. I put myself in their shoes. I felt like the decisions I was making were crafting a story meant just for me, like I was living some zombified version of The Neverending Story. I felt responsible for keeping people alive, if they died it was final… and my fault.

Episode 5 picks up right as Episode 4 ends, and without giving away anything, Lee has a singular quest ahead of him and nothing will get in his way or keep him from succeeding – though his time is limited. While the other episodes had moments of action and quiet, this time around the tension stays high throughout. Clementine needs to be kept safe, needs to be kept alive, and it’s constantly in the back of Lee’s (and your) mind.

The ending is totally and completely satisfying, with no dumb cop-outs or twisting nonsense to ensure sequels. This is the end of the arc for these characters, and we get closure for the most part. I did get separated from some of the group, and while I can assume they’re ok, who knows for sure? But such is life in a zombie wasteland. Did I cry at the end? Maybe a little bit. 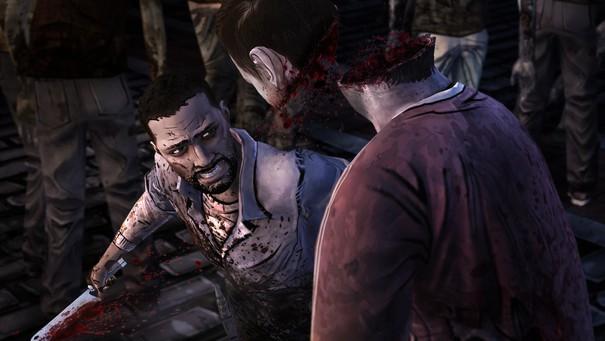 This episode does suffer from the same issues as the ones before it. The action sequences are typically clunky and the puzzle bits are sometimes a little too obtuse, and if you don’t know where to go or click then you’re just stuck. It’s obvious now those are limitations of their engine and hopefully get a facelift before next season.

Some have mentioned wishing you could just bypass those and just do the conversations and choice stuff. While initially I agreed, I think you need that other stuff to keep this from becoming a Choose Your Own Adventure. You need player agency. You need to be affecting the world around you. You need to be a part of it directly, not puppet master style.

So here we are, a game that started out in August hot on the heels of the reviled Jurassic Park, some of us wondering if Telltale even had a good game left in them. As the episodes passed and got better and better, I began to wonder if it was even going to be possible to please me with the finale. I just expected too much. And yet Telltale surpassed every one of my expectations. It’s a game we’ll be talking about for a long time. It’s a new high watermark for storytelling in games. And speaking personally, it’s my game of the year and I can’t recommend it strongly enough.