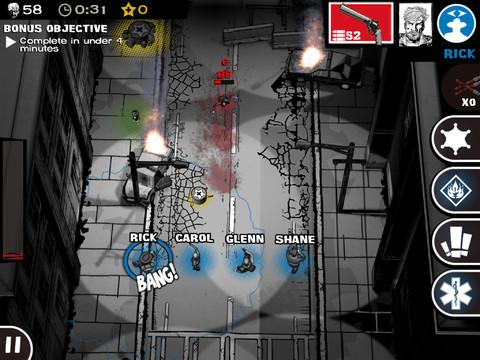 The Walking Dead already had a critically acclaimed game come out during 2012. But like the walkers themselves, a property this popular is just going to keep coming. That’s why Gamagio and Skybound have joined forces to create The Walking Dead: Assault, a top-down strategy game that puts you in control of Rick and the gang in tense battles that look like they were ripped right out of the comic book and planted on your iOS device.

Specifically, The Walking Dead: Assault starts at the very beginning, incorporating locations from the very first comic book story, “Days Gone By.” The first mission has you controlling former police officer Rick Grimes as he awakens in the hospital where he recovered from his coma. Your goals are twofold: Wipe out the walkers in and around the hospital, and gather up as many supplies as you can.

Assuming you survive the level, the supplies definitely come in handy. A new character is unlocked at the end of each mission, and you can add them to your roster of survivors by trading in the proper amount of supplies. A bunch of your favorites (and non-favorites) are eventually unveiled, including Glenn, Carl, Lori, Shane, Andrea and more. Each survivor has his or her own weapon, special ability and bonus that impacts the entire group, and a big part of the fun is putting together a team of four that works together in an organic fashion.

There are plenty of strategic considerations, too. Guns fire automatically when enemies are in range, but each character’s ranged weapon has a different firing arc and rate of fire. Ammo is a constant concern, though defeated foes occasionally drop a few bullets, and bigger stashes can be found on some of the maps. You can’t always rush at the zombies with guns blazing, either, because a noise meter tracks how much of a racket you are making. Fill it and you’ll attract the attention of The Herd, a large pack of walkers that is added to the number of undead you have to defeat.

Since we all can’t get along after the apocalypse, you’ll have to deal with hostile humans too. You can take them out with guns to receive more ammo or melee weapons to pick up supplies, but in keeping with the comic’s lore, they’ll pop right back up as walkers once you do. And yes, that goes for members of your group you may lose, so be prepared to put bullets in Rick’s head a few times. Unthinkable, I know. 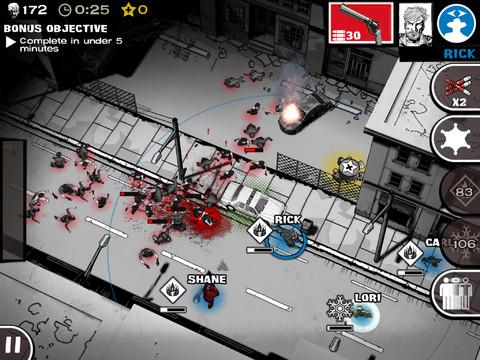 Though your main goal is always to eliminate a certain number of zombies, the game pushes you to do more by adding some extra goals to every level. They’re optional, but always a good idea since they grant you more supplies. If you don’t want to unlock new characters, the supplies can also be used to boost all of the survivors’ ammo capacity, health and damage or decrease the cooldown time for their special abilities. A whole host of achievements is also in play, and completing them can reward you with trivia, downloadable artwork and other goodies.

The developers did right by the control system, allowing you to give the survivors orders individually or as a group. Occasionally the hold-to-move command to move the whole group isn’t as responsive as you’d like, but otherwise the precision is enough to get the job done. The maps can be spun in any direction or pinched to zoom in and out, and viewing things from every angle definitely helps when buildings get in your way.

Fans of the comic books are going to love the artwork, which looks like a 3D version of those pages come to life. Actual panels pop up at various times, especially when you’ve just bungled your way into a big group of zombies. The music and sound are fairly sparse outside of gunfire and the moans of the undead, though maybe that’s appropriate for the setting. 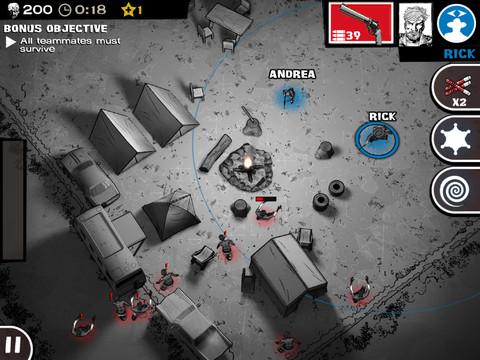 The Walking Dead: Assault essentially only covers the first six issues of a series that has now hit the triple-digit mark. Future episodes likely depend on the popularity of this initial installment, but trust me when I say I don’t think that’s going to be a problem. Even if you haven’t been bitten by The Walking Dead phenomenon yet (horrible pun fully intended), if you like strategy games, you’re going to want to give this one some of your time.