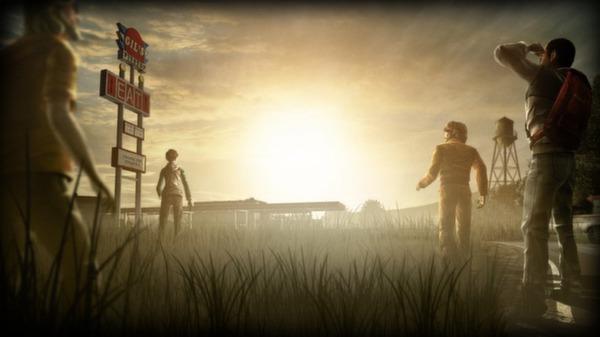 A Walking Dead fan? You really need to grab 400 Days, then.

The Walking Dead was Gamezebo’s Game of the Year in 2012. It also happened to be my own personal game of the year, thanks to its immense storytelling and the sheer amount of choice that the game offers. Thus, to say that I was looking forward to 400 Days, a special episode aimed at tying Seasons One and Two together, may perhaps prove understatement of the year.

As it turns out, my severe anticipation was well directed. I was worried that the new characters introduced during this short episode wouldn’t be granted enough time to really gel, and provide the sorts of intense storytelling that I came to expect from The Walking Dead – and yet while 400 Days isn’t as emotionally moving and utterly compelling as the first season, it’s remarkable just how drawn into this new set of characters I felt, and how these quick snapshots of a moment in their lives stirred up the same excitement that Lee, Clem and co. provided previously.

So here’s the deal: 400 Days tells five separate short stories, each focused on a survivor of the same zombie apocalypse. Each story takes place sometime within the first 400 days of the outbreak occurring, and is centred on a character in a predicament.

The storytelling immediately explodes from the get-go, and you know you’re going to be in for a rough yet entertaining ride. One story is focused around a group of people who have banded together to survive, while another is set aboard a prison bus. Elsewhere, two run-of-the-mill guys are driving through a foggy forest, rushing to escape from bandits hot on their heels.

The level of variety, and sheer quality of the writing hits you square in the face – and what really is so impressive is just how much you’ll find yourself enjoying the company of these characters, even though they’re only given 20 minutes or so of airtime each. It’s crazy that these intense, short introductions had such an effect on me.

What’s really great is that you can tackle the five stories in any order you choose, and each vaguely intertwines with the others. There’s a truck-stop diner that plays a role in some of the stories, and depending on how many days after the outbreak each story falls, you’ll see certain bits here and there in one story that were determined by a choice you made in another story.

And yes, 400 Days throws plenty of choices at you – perhaps even more than the original game did. You’ll be constantly put in life-or-death situations, and only given moments to make your decision. The conversations work in a similar way, and transition smoothly into one another – a lot of the time you can choose to butt in on someone speaking, and other times you can decide to simply say nothing at all and let the conversation run its course.

But it’s the little things as well that make 400 Days such a wonder. The pin-board you choose the various stories from shows each of the characters in photos from before the outbreak, which makes jumping to their lives now so much more difficult to swallow. Then there’s the young girl character featured in one of the stories, who couldn’t care less if people live or die, and is quite obviously meant to be a huge contrast to Clementine from the original. This contrast totally hits the spot.

The original Walking Dead was pretty weak in terms of gameplay, but it didn’t matter so much since the story elements were so sublime. 400 Days is perhaps even weaker where gameplay is concerned, to the point where it becomes regularly noticeable. The parts in which you are “playing a game” – such as when you’re sneaking through a cornfield, or running between cars to dodge a sniper – are extremely barebones, are tend to feel a little bit pointless.

400 Days is a fantastic taster for the second season of The Walking Dead, and will satisfy any fans of the original. All I can say is: Roll on season two!