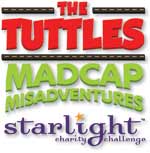 The Tuttles Madcap Misadventures is a classic “platformer” game – where your characters move from the left side of the screen to the right, jumping over obstacles, battling baddies and picking up important items – but it stars a futuristic family as they try to find their way to the Alamo in a flying car.

While the dialogue can grow repetitive, several well-known actors breathe some life and comedy into their roles including: Bob Saget as the bumbling father Barry; Jamie Lee Curtis as the with-it mother Barbara; Ashley Tisdale as the teen daughter Jess; and Dominic Scott Kay lending his voice to the young son, Zach. Other characters include Dave Thomas as The Australian (this is a funny scene indeed), Dave Coulier as The Islander and the cheesy but affable William Shatner as the voice of Vance, the family’s high-tech mini-van.

As you might guess by the game’s title, the Tuttles take the long way to the Alamo by first visiting Egypt in to ward off mummies and vipers (which curiously turns them into dollar bills and gold bars when destroyed), jump over deep chasms and collect valuable items needed for the rest of the journey. You’ll also play through jungles, avoiding dangerous animals and traps, travel underwater, and fly through the air as the mini-van, avoiding lighthouses, albatrosses, lighting bolts, eagles and whales spewing up water from below.

In total the game features 40 side-scrolling levels, where you get to play as each family member – and the mini-van a few times, too. Every few levels an entertaining flash-animated comic book vignette helps to push the story along.

The amusing story, which is supported more than 300 lines of dialogue, is cute and family friendly, but the humorous comments and jokes are hit and miss. OK, while I caught myself chuckling a few times (Shatner, as Vance the Mini-Van, explaining to the family why it ran out of gas and crash-landed in the desert) but there are a number of groaners, too, such as the wife saying to the family “Let’s look at this snow globe as it’ll distract us from crashing.” Um, ok.

There’s also quite a bit of voice repetition, too, such as Vance saying “I told you I’m a staaaarrrr” virtually every time the vehicle scoops up a falling star, or all the grunts heard every time you press the jump key (which will be often).

The repetition is also in the gameplay, as you’ll basically do the same thing from level to level: jump, attack, climb, repeat, with a different set of enemies per level to fit the environment. The desert level might have scorpions and snakes to fight (or jump on) and swirling dirt devils to avoid, but the underwater levels have crabs and octopuses to jump on and mines to avoid, and so on.

Another issue is some finicky controls, such as when the mom goes shopping in the supermarket (tutorial level) and she kept walking into the elevator even though I didn’t tell her so (by pushing the up arrow on the keyboard).

Another issue is the derivative gameplay as this formula looks and plays like dozens of other platformers out there. Certain levels of The Tuttles share a strong similarity to Kenny’s Advenure from DivoGames, which should come as no surprise since the two games share the same game engine and DivoGames was responsible for the level design and programming for The Tuttles as well.

Shortcomings aside, The Tuttles Madcap Misadventures is easy to pick up and play, regardless of your age or skill level. Anecdotally, my 5 year-old enjoyed it, as did I, at 37, though the repetition tended to annoy me more than my son. The game, though, is fun, funny, colorful and keeps you interested in the family’s adventure.

You also will feel good knowing $15 out of the $19.99 it costs to buy the game goes to the Starlight Children’s Foundation to brighten the lives of seriously ill children and their families. Kudos to the game developer, publisher and celebrity voice talent for raising money and awareness for this children’s charity.