The Trouble With Robots Review 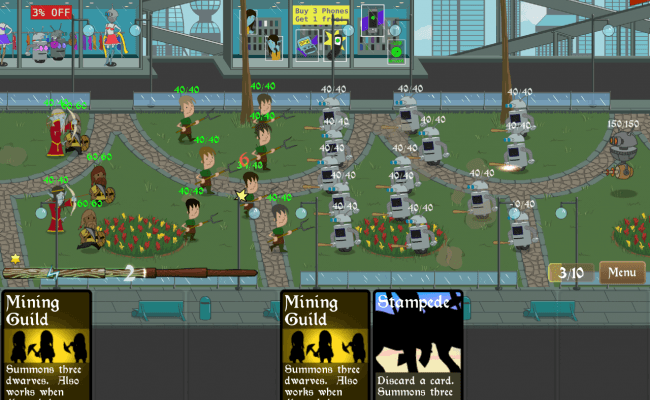 Roombas will be the end of our species. Count on it.

You know what the trouble with robots is? You can’t trust them. I mean, we build them to fill a void or to complete tasks that we don’t particularly want to do. They’ve infiltrated nearly every part of our lives, from the production side of an assembly line to household chores like vacuuming. Of course that little Roomba looks innocent, but if it had eyes they’d be red and full of disdain, rage, and vengeance. Watch your feet, because one day your Roomba will bite down and try to suck the soul out of you. That’s the trouble with robots, and it’s exemplified in a side-scrolling card game aptly titled The Trouble with Robots. The difference in this indie title’s story is that the robots are invaders of a world populated by humans, trolls, elves, and dwarves. That’s not the point, though. The point is, robots are not to be trusted. But can you trust The Trouble with Robots to provide a worthwhile gaming experience?

The Trouble with Robots is a strange, intriguing mix of a strategy-based card game and a side-scrolling, real-time fighter. It sounds confusing, but you’d be surprised by just how intuitive it is. The card aspect of the game feels very similar to Plants Vs. Zombies, where you’re presented with a stack of cards that increases as you progress. You’ll take a selection of those cards with you for each battle, allowing you to enact specific actions over the course of your war against the metal menace.

There are forty cards available in all, and you’ll take anywhere from 5 to 10 with you in a given encounter. The actions of the cards range from calling in reinforcements to placing modifiers on attack effects and ranges to healing units in the heat of battle. As you play, you’ll gain a better grasp on the strategy behind your card combinations and will be casting out devastation to the deviant robots. Each card has a regeneration time as well, so be careful when you decide to launch your favorite power. 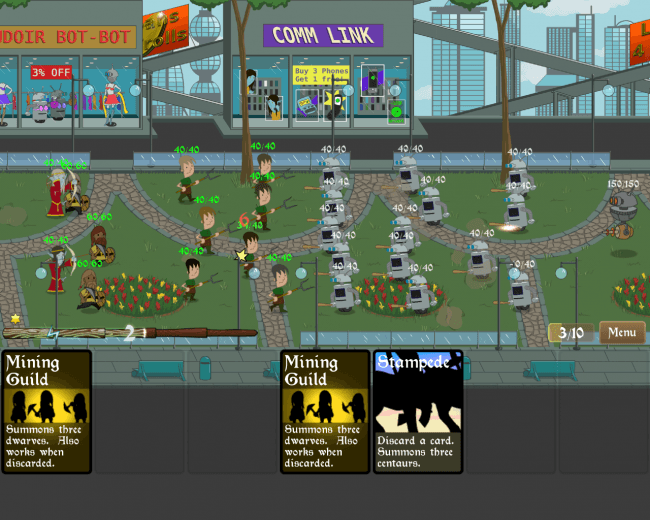 If you start to feel overwhelmed by the oncoming onslaught of robot rebels, you take on a more active role in the front line with some wand power. It can be used to do damage to a single unit, which can be a lifesaver when your defenses are depleted.

A special note should be made to a particular mechanic of The Trouble with Robots in regards to your units. When they start to take damage, they will move themselves out of the way of danger and to the back of the line where they’ll wait to get healed. This is a great way to avoid the loss of a particular piece of your militia and is an excellent additional strategic aspect that you don’t have to worry about controlling on your own. It’s some intelligent AI that doesn’t want to die, but will attack with undying vengeance when given the go ahead with a full health bar.

There’s 18 levels in The Trouble with Robots‘ story mode, and they are enhanced with every story advancing moment. The game has a wicked sense of humor that invokes a parodical view on pop culture’s most classic tales of resilience and rebellion. It’s done brilliantly and it plays perfectly within the vibrant, cartoony look of the 2D world. The subtle slips of comedy mirror the deceivingly intricate graphic design, including animated backgrounds that spice up the visual aspect of the game. 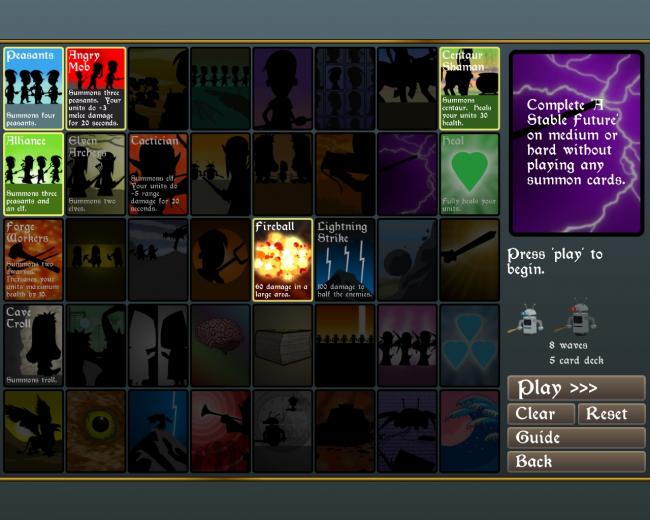 While the story is fun and the game looks great, it is extremely linear. You can go back and play through the game with different deck builds and try new strategies to take down the iron-based infantry that is attacking you, but every instance will be exactly the same. There are four challenge modes, but it only adds so much replay value to the game.

Honestly, that’s where the real trouble with The Trouble with Robots is: value. This game would fit brilliantly on a portable platform like iOS or Android. It’s not a bad option for a PC game, either, but it carries a hefty price tag. There’s little flexibility in challenge, not much for randomization of any sort, and no multiplayer of any kind. Some of those things would be just fine, but it makes it hard to justify the cost with all of those aspects missing. It’s a great game. The combat is fun, fluid, and feels rewarding; the story does exactly what it should once its tone is established; the graphics are gorgeous and it carries a polish most indie titles lack. But man, that price. Bring down the cost, keep updating the game with more cards and customization, or bring it to a mobile platform and this is a can’t miss, must have. As it stands, it’s worth checking out if you’ve got the cash available.