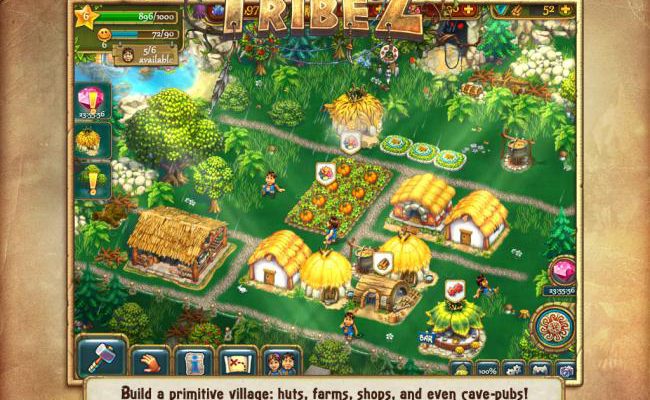 The Tribez isn’t revolutionary, but it’s a very colorful and visually pleasing take on city building

The Tribez may sound like a civilization building game, but it’s actually just a typical iOS city builder wearing a very elaborate, cleverly designed coat of paint. You play as someone from the modern day who finds a lost underwater civilization. Treated as a messiah figure by the villagers, you’re roped into helping them develop their civilization, which means the usual CityVille-style grind of erecting buildings, leveling them up, collecting resources, and expanding your territory. Where The Tribez parts way with CityVille is in its philosophy toward social interaction and microtransactions.

While CityVille demands constant nagging of your social graph in order to progress, The Tribez is happy to let you progress throughout the game without interacting with other players at all. Likewise, there’s less of an emphasis on buying vanity items with your virtual currency. Instead, players are encouraged to spend them mostly on speeding up building times. So instead of running into the brick wall of the “no friends tax” social network city builders often implement, The Tribez is all about long build times.

This approach works surprisingly well. The Tribez‘ focus on single-player gaming allows for a wider variety of missions and more freedom in designing your tribe’s settlements. You begin with a few huts in a jungle clearing, but slowly unlock decorative items, workshops, and more elaborate huts to build. As you add dwellings to your village, more villagers move into it. Increasing your population triggers a variety of story-based quests reminiscent of FrontierVille‘s early days, though instead of marriage you focus on things like finding lost treasures and defeating invading enemies. 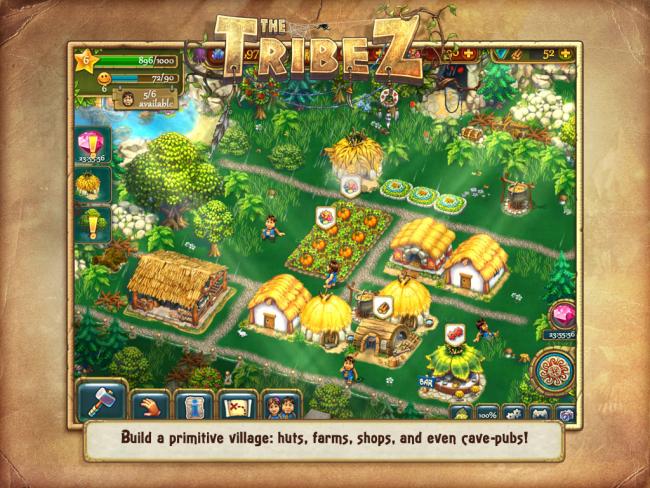 The Tribez offers a stronger sense of progression than most city builders, since you actually have long-term goals to pursue. The game takes place across three islands, though you can only access later islands by developing earlier ones as completely as possible. This means building up large populations, clearing away obstacles, and otherwise succeeding at playing the game. Managing large settlements is surprisingly painless, as it’s easy to use the iPad’s touch interface to quickly scroll around all areas of a developed island.

What makes The Tribez genuinely pleasant to play is the attention paid to the graphics. Buildings are large and colorful, with designs that get more complex as you level them up. Your islands are full of life, with pterodactyls, small mammals, and brightly colored insects constantly moving around the map. Even your villagers are surprisingly detailed, which animations for having conversations, eating, or just taking a load off. The Tribez doesn’t bring anything new to freemium city builders, but it’s a very charming take on a genre that’s perfectly suited for tablet play.